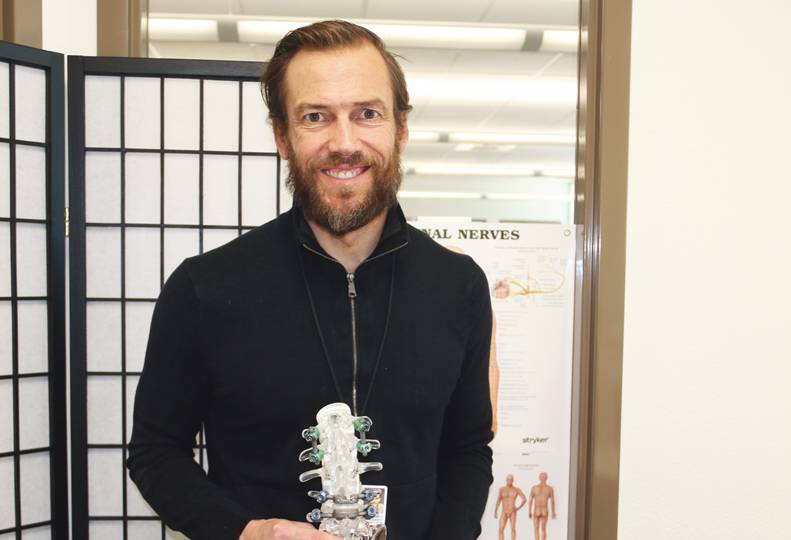 Northwest Specialty Hospital, in Post Falls, is changing the way many of its patients’ spinal surgeries are conducted through the use of a surgical robot navigation platform, says spinal surgeon Dr. Roland Kent.

Since Globus Medical Inc.’s ExcelsiusGPS robotic navigation platform arrived at the hospital in April, Kent says he’s used it in about 80 surgeries. It’s a less invasive, more accurate way to operate than the previous method, and it means faster recovery for patients. Kent says Northwest Specialty Hospital is one of about 25 health care centers in the U.S. to use the platform.

The platform combines a rigid robotic arm with navigation capabilities. It assists a surgeon by navigating the patient’s anatomy, using scans taken before and during surgery, to identify the best locations for incisions and medical implants.

“Before long, it’s going to move beyond the functionality of just pedicle screw placement,” Kent predicts.

The biggest benefit of the platform is that it dramatically decreases how much of a patient’s body is disturbed during the course of surgery, Kent says. Using the analog method, Kent often had to make an incision several inches long to make room to push muscle out of the way.

“Once you push it out of the way you’ve devascularized it — it doesn’t have great access to the blood supply anymore,” Kent says. “Whereas with the robotic assistance … we’re no longer having to move the muscle out of the way. We essentially go right through the muscle, spread it either way, and almost immediately it falls right back so that the muscle itself is not devascularized.”

Less disruption of the body means faster recovery time for patients, Kent says. A surgery that once was followed by a hospital stay of two weeks, including a few days in the intensive care unit, is decreased to a hospital stay of up to three days when the ExcelsiusGPS platform is used.

Surgeons also can make decisions more confidently with the help of the platform, Kent says. He sometimes faces a situation in which he has a identified a bony spot to place a pedicle screw, but the spot is just a few millimeters larger than the screw itself. In such situations, inserting the pedicle screw through standard techniques challenges a surgeon’s accuracy and surgical precision.

“Whereas if I have the guidance associated with the robotic assistance, I can go right down the middle of that space and know that I’m confidently in the bone and in the pathway that I was trying to get into,” Kent says.

ExcelsiusGPS has also simplified more complicated surgeries, Kent says. Before the arrival of the platform. Kent says he sometimes encountered a case in which a patient already had a spine full of medical hardware. In those cases, he was uncertain whether he could put yet another device into the patient safely.

“I’d skip it and just hope for the best; we’d do our best to shore it up with other, even more archaic techniques,” Kent says. “Now I can define a bony pathway and safely deliver a screw within a millimeter variance of that bony pathway.”

Kent says he wasn’t always so trusting of surgical robots. About 15 years ago, he started using a robot made by a different company to assist in surgeries when he worked at the Navy Medical Center Portsmouth, in Portsmouth, Virginia.

Because the Navy doesn’t require FDA approval, its medical centers often are free to use tools and techniques that surgeons at other hospitals aren’t allowed to use. The early version of the robot was one such tool, Kent says.

“We were involved in a study that was designed to help with FDA approval for those particular devices, and to be honest, (the robot) was so clunky we would pray that it would break down so that we could just do the surgery without the robot,” Kent says. “That being said, the reason we did the research at the time was that we knew that this was the tip of the iceberg. We knew that this was going to revolutionize spine care and revolutionize surgical care.”

Northwest Specialty Hospital agreed to explore purchasing the platform because its surgeons want to stay abreast of the most groundbreaking tools available, Kent says.

“This technology, which we’re just beginning to realize the functionality of, is revolutionizing the way that we can do spine surgery,” Kent says.

ExcelsiusGPS costs more than $1 million, not including annual maintenance costs of $10,000 to $15,000, Kent says. Northwest Specialty Hospital was able to acquire the platform for free — Globus Medical makes both the ExcelsiusGPS and the pedicle screw the hospital uses, and the hospital agreed to buy an undisclosed number of medical implants, such as pedicle screws, in exchange for use of the platform.

“For us, it was a win-win situation in which we’re going to be paying less for the implants, they’re going to aid us in getting those implants in safely, and then it’s come full circle with the company saying, “We’re going to use you as a site to which people can come and see the functionality of the robot.”

Surgeons from all over the U.S. come to observe the robot in action, Kent says.

As more surgeons adopt the technology, Kent says he expects the FDA will approve more applications for the ExcelsiusGPS, including help in shaping rods that connect pedicle screws, inserting spacers between vertebrae, and shaving off parts of bones.

“The future is going to get to the point where through four or five small incisions, we’re able to perform a lot of surgery for something, where we previously had to do one huge long incision and sweep the muscle out of the way,” Kent says.