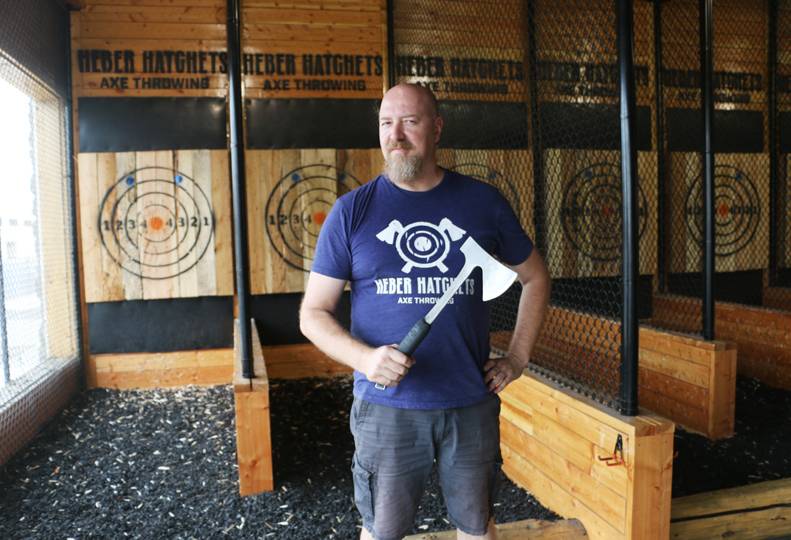 In the months since Heber Hatchets opened, manager Dave Kelley says the venue has been a popular destination for ax-throwing aficionados and novices coming from all walks of life.

The six employees at Heber Hatchets teach customers how to throw an ax. After that, Kelley says, staff members essentially serve as lifeguards, tasked with ensuring customers are playing safely.

Throwing lanes, which are like bowling lanes, are rented by the hour. Signs explaining various throwing games customers can play are posted around the room. Every few seconds, the satisfying thunk of steel sinking into a wood target is followed by the cheers of players.

Even those who are nervous to try the old sport of ax-throwing warm up to it after a few throws, Kelley says.

“Some of the best reviews that we get are (from) people who are a little scared or a little outside of their comfort zone, but they try it. They have a blast, and then they come back with their friends,” Kelley says. “That is the best advertising you can’t buy.”

As the weather cools and students return to universities in the Spokane area, Kelley says he expects Heber Hatchets to draw more customers. He also says he plans to form ax-throwing leagues in the fall.

The Spokane business, located at 2015 N. Division, Ste. B, is formally Heber Hatchets Axe Throwing of Spokane. It’s the seventh Heber Hatchets indoor ax-throwing range—and the first in Washington state. The original Heber Hatchets opened in Heber City, Utah, about a year ago. Since then, the company has gained momentum as it’s established more venues in Utah, Idaho, and now Washington.

Kelley says college towns are a big draw for the company — Gonzaga University, one of the four universities in Spokane, is within walking distance of Heber’s Spokane venue — but a nearby college isn’t essential for Heber Hatchets to be successful in a new market.

“It’s two hours south of here. They don’t really have a major college, but we know that place is growing like crazy,” Kelley says of the Tri-Cities area.

Ax-throwing is a popular activity for bachelor parties and corporate teambuilding functions, Kelley says. For large events, the facility can serve as many as 100 people.

Kelley, who teaches graphic design part-time at North Idaho College, in Coeur d’Alene, says he started throwing axes 13 years ago, when he and some friends were on a camping trip and started launching axes and hatchets at a dead tree out of sheer boredom. That quickly became a game with rules and a points system, and Kelley was hooked.

When Heber Hatchets began hiring here, Kelley says he jumped at the chance to apply.

The space at 2015 N. Division was previously occupied by a wellness clinic, Kelley says. Beyond installing cedar paneling and throwing lanes, he says the space needed little remodeling.

Kelley says Heber Hatchets doesn’t currently serve food, but customers are welcome to bring their own food, and he plans to offer some beverage choices in the future. Alcohol, he says, isn’t allowed, and those who are clearly intoxicated will be asked to leave for safety reasons.

Heber Hatchets Axe Throwing of Spokane is open 5-10 p.m. Monday through Thursday, 5 p.m.-midnight Friday; and 1-11 p.m. Saturday. Rates by the hour are $15 a person for one to three people, $12 a person for groups of four to seven people, and $10 a person for eight or more people.