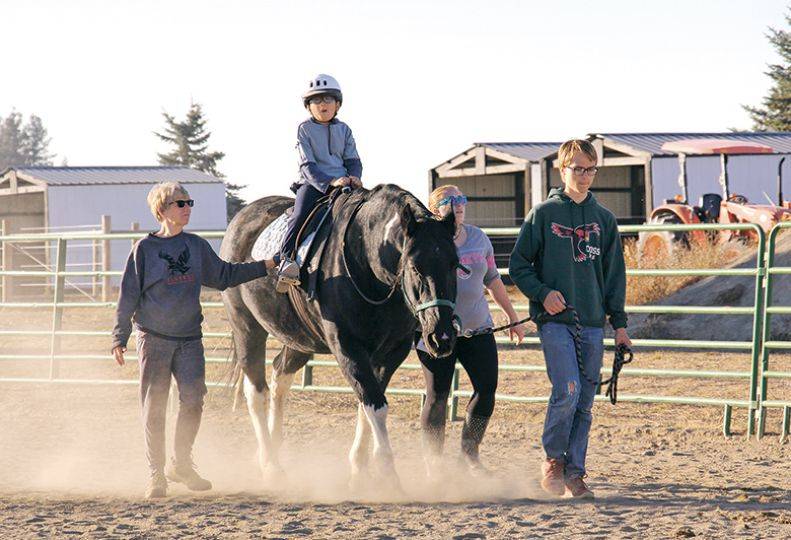 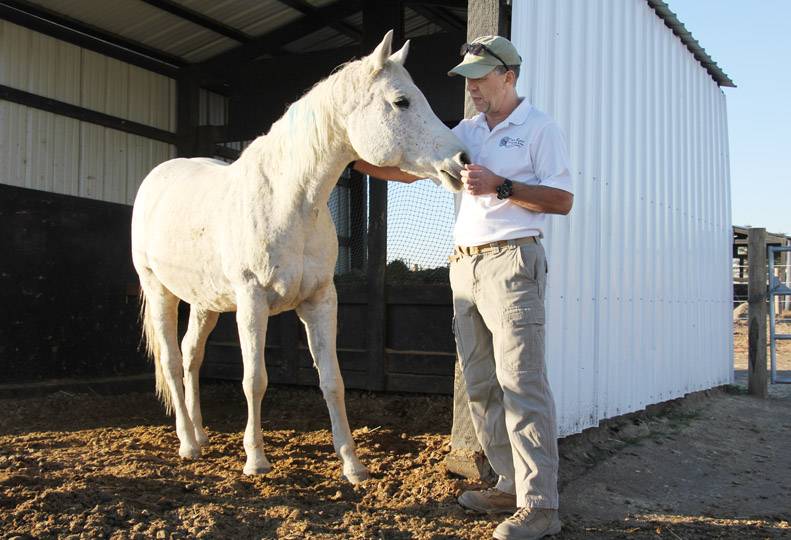 -—Virginia Thomas
Free Rein Therapeutic executive director John Owen says the organization has a team of eight horses at the facility it uses south of Spokane.

For Free Rein, Owen says The Equus Effect is tailored for veterans who are experiencing mental or physical difficulties. The program is also a pilot with the U.S. Department of Veterans Affairs to study the health effects interactions with horses might have on veterans the VA serves.

In the program, six veterans visit the riding center for one three- to four-hour session a week for five weeks. Veterans attend with their VA mental health counselors and develop skills such as leading, backing up, and turning the horses.

Between sessions, participants meet with their therapists and talk about the experience, says Owen. They also complete a pretreatment and posttreatment survey to help evaluate the effectiveness of the therapy. Free Rein employees don’t see those results, he says; the nonprofit won’t be informed about the mental or physical ailments for which veterans are receiving treatment.

Currently, the VA doesn’t consider equine therapy to be research based and won’t fund it for its patients, claims Owen. Part of the pilot program is to help study the potential benefits of such treatments.

Owen says the horses are constantly gauging threats and they sense humans’ breathing and heart rates, so it’s important for the participants to be aware of their own behavior and how they communicate with the animals.

“Sometimes, just acknowledging one’s own anxiety will help reduce the stress of the horse,” he asserts. “It sounds New Age-y, but it’s not.”

Along with The Equus Project, Free Rein offers a horsemanship program for veterans, says Owen.

That program is how Owen became involved with Free Rein. A Navy veteran, Owen was diagnosed with post-traumatic stress disorder. He went through Free Rein’s veterans’ program in spring 2017.

“We know that to be true because of the impact that we’ve had on our riders, our participants, and their families,” he says.

Along with the veteran’s program, Sandy Jones, the nonprofit’s founding director, says the center teaches horseback riding to children and adults with special needs. In that program, guests develop horse riding skills, and they also develop social skills in the process, says Jones.

When someone is in control of an animal that weighs more than 1,000 pounds, it gives them more confidence to interact with other people, she says.

Jones says about one-third of participants register on the autism spectrum. Another third has cerebral palsy, but there’s a big range of participants that visit the center, including people who have mental health issues, Down Syndrome, or multiple sclerosis.

Classes cost $38 a person and are grouped by ability level, she says.

Established in 2008, Free Rein leases space out of the Spokane Equestrian Center at 2205 W. Gibbs Road, south of Spokane, says Owen. The nonprofit has a 2018 operating budget of $250,000 and a team of eight horses.

Second Chance occupies 30 acres and, as of mid-October, had 35 horses, although Merwick says she expects that number will drop to 30 by the end of the year. Established in 1999, the nonprofit had relocated a few times recently before settling in Spokane County. It previously had a long-term home in Ellensburg, Wash.

Merwick says 35 horses on 30 acres “can seem like not a lot of space,” but the area is landscaped and includes trails and other terrain for the horses to enjoy.

Currently, Second Chance offers Leading with Horses, a program in which participants learn how to lead, halter, and groom horses, along with other tasks, she says. The nonprofit suggests donations from participants of the program, but it’s not necessary, she says.

Types of participants vary. Guests include visiting families, and some are cancer or post-traumatic stress survivors.

Merwick, however, says she feels led to help families and work through suicide and bullying issues.

Harbert says she’s hoping to offer therapy workshops next spring. The subjects of those workshops would depend on the needs of the Spokane community.

Harbert says she’s acquiring her counseling certification for Washington state, and she isn’t sure when she would open a full practice in Spokane County, something that could be a couple years down the line.

Currently, Harbert sees people of all ages and specializes in “healing and recovering from trauma,” she says, but she sees patients for several issues. She doesn’t work with animals at the moment, but she’s worked with horses in the past and hopes to transition back into that work.

Harbert says horses can mirror the emotions in their environment, but they also can be great friends.

“Horses can just make fabulous friends that are accepting of the emotional state you’re in,” which also can make them great partners for counseling, she says.