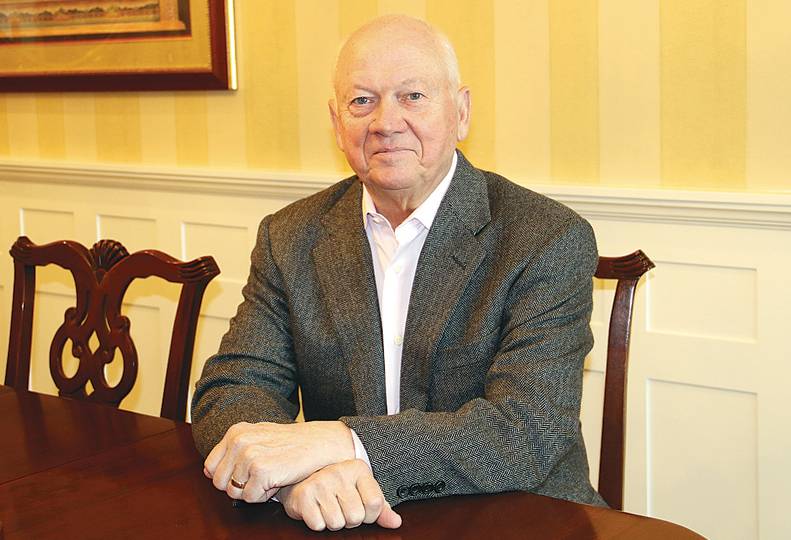 -Virginia Thomas
LeRoy Nosbaum was named president and CEO of Itron Inc. for the first time in 2000, after joining the company in 1996.

In a career that spanned more than 40 years in the utilities industry, LeRoy Nosbaum spent about 17 years at Liberty Lake-based energy and water technology and services company Itron Inc., including two separate periods as the company’s CEO.

Nosbaum, 72, says that under his leadership, Itron’s revenue grew to $2.4 billion from $280 million, employee morale improved, and acquisitions expanded the company’s capabilities and global reach.

“We made money every day. We did things right. We treated people right,” Nosbaum says.

While Nosbaum oversaw Itron as it grew into a global utility meter reading technology manufacturer, he asserts he never lost sight of the importance of participating in the community in which Itron originated.

Helmbrecht says Nosbaum felt Itron and its employees had an obligation as a company to invest in the community, not just money, but also volunteer time and services.

“LeRoy understood that a strong and healthy community would be good for our employees and would aid in the recruitment and retention of talented employees,” Helmbrecht says.

Nosbaum also had high expectations for Itron’s employees that came with a great deal of faith in their abilities to meet those expectations, Helmbrecht adds.

“LeRoy didn’t give us the impossible—just the really hard work—but he had confidence we could do it,” he says.

Mima Scarpelli, who was Itron’s vice president of investor relations from 1985 to 2006, agrees with that assessment.

“He’s not afraid to look you in the eye and give you tough advice when you need it most, but he does it in a very constructive manner,” Scarpelli says, adding that employees held Nosbaum in high regard.

Nosbaum, born and raised in Chicago, began his professional career in 1969 at Springfield, Ill.-based Sangamo Electric Co. He and his wife, Brenda, moved around the U.S. as Nosbaum climbed the ladder at Sangamo, which was later bought by oilfield services company Schlumberger Ltd.

In 1989, he left Schlumberger to become vice president of marketing for Silicon Valley-based startup Metricom Inc.

Metricom was attempting to make electronic meters, Nosbaum says, as well as an automatic communication system that would eliminate the need for meter readers to check individual meters. When the company became more involved in wireless communication and less in utilities meters, Nosbaum decided it was time to leave Metricom.

“I had been sort of an electric, water, and gas utility guy for my entire career at that point,” he says.

In 1996, Nosbaum called Itron in his search for a new job.

“They said, ‘You’re an interesting guy. You’ve got a huge amount of background, and you have a lot of background in radio technology …. Why don’t you come and talk, and we’ll see if we can’t find a position for you.’”

After about a year, he became Itron’s vice president of marketing, then later became the company’s chief operating officer.

Nosbaum says Itron turned out to be a great fit.

Satre, who Nosbaum describes as the “father of Itron,” felt responsible for keeping an eye on the company, Nosbaum says.

Satre impressed upon him the importance of attending to tasks immediately

Nosbaum says, “Wendell had this list, and it was maybe 10 things. One of those sayings, I have always remembered: Why not do it now? I love that saying, and I try to do that as often as I can.”

As CEO, Nosbaum oversaw several acquisitions, including two that he says doubled the size of the company.

“When I was working for Schlumberger, they were the largest maker of electric, water, and gas meters in the world,” Nosbaum says. “Over time, they decided they didn’t want to be in that business, and so they sold it off in a variety of ways.”

A few years later, Itron bought Actaris for about $1.6 billion.

The company also had employees in Italy, China, the Philippines, Indonesia, South Africa, and Brazil, he adds.

Nosbaum was traveling more than ever before, and Itron’s interests were spread around the globe.

In 2009, Nosbaum decided to retire from Itron.

But for Nosbaum, retirement didn’t mean inactivity. He bought an 80-acre ranch north of Newport and began ranching full time.

As Nosbaum retired, Malcolm Unsworth was brought in to succeed him.

Unsworth, a member of Itron’s board, had been serving as president and chief operating officer of the Actaris branch of Itron. However, Nosbaum says Unsworth struggled to balance all of the demands a CEO must face.

Some 20 months after he’d left, the board of directors asked Nosbaum to return to Itron as CEO. In 2011, Nosbaum became CEO of Itron once more.

Nosbaum says he brought with him a new perspective on efficiency.

“You’ve had a chance to go away for a couple of years, and now you come back, and you look at this with a really fresh view of ‘what are we doing and why are we doing that?’” he says. “We had a very famous meeting in Paris, and I said to the top 100 managers of the company, ‘I give you permission from this moment forward to stop doing anything you don’t think you should be doing,’” he says.

Nosbaum retired from Itron for the second time in 2013, and Philip Mezey, who had been president and COO of the company’s global energy division, was named CEO. Mezey has remained Itron’s CEO since then.

Throughout his time at Itron, Nosbaum asserts he focused on remaining accountable—something he contends he doesn’t see in many companies today.

“I think a lot of companies get criticism because they aren’t upstanding and they don’t do the right thing,” he says. “If we made something that’s not working the way it should be, we take it back and we make up for it. We don’t say to the customer, ‘That’s not our problem,’ because that is our problem and we know it’s our problem.”

Since retiring from Itron, Nosbaum has busied himself with his ranch, which he says is currently for sale. He also serves on the board of directors of Houston-based window and door manufacturer Quanex Building Products Corp. and on the board of Saint George’s School, a private K-12 school north of Spokane.

But Nosbaum hasn’t ruled out the possibility of coming out of retirement again, though not necessarily in order to rejoin Itron.

“Today, Itron is a different place than when I retired, and I’m completely out of contact, so I couldn’t go back and run Itron effectively today,” Nosbaum says. “But would I like to be engaged in managing a business again? Yes, I really would, because it’s fun.”