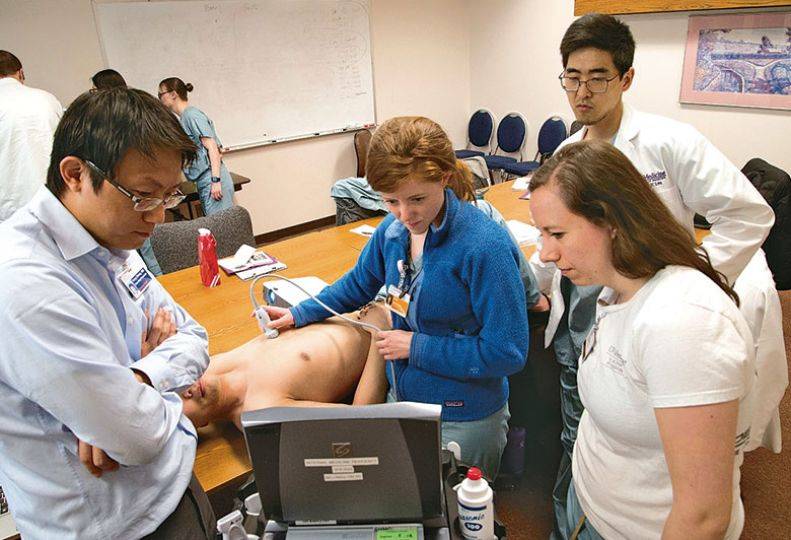 The University of Washington School of Medicine-Gonzaga University Regional Health Partnership is incorporating advanced technology into medical education programs at its Spokane site.

The school already has integrated a few different forms of new technology into curriculum, including a digital stethoscope, portable ultrasound machines, and an ophthalmoscope attachment for smartphones.

“What it does is, you can place the stethoscope on the patient’s chest, and it will record the heart sounds that you’re hearing so that the students can listen to it too,” Swanson says. “That way they hear the same sounds that you’re hearing. Before, it would be ‘ok I want you to listen to this sound and this sound,’ and we’d say ‘do you hear it?’ and we’d never know because they always say yes.”

Medical student Brittany Bergam says the device enhances her understanding of heart and lung sounds beyond what she learns in the classroom.

“It’s helpful in that the best way to learn is to learn by doing,” Bergam says. “If we’re able to experience what crackles or rales or some type of disease process (sounds like) in a teaching setting, you can correlate the findings better instead of reading about what it’s supposed to sound like.”

The digital stethoscope’s EKG capabilities mean that students can see the electrical activity of the heart as they listen to a patient’s heartbeat.

The digital stethoscope could help physicians to provide more accurate diagnoses, she adds.

“If you have a physician who’s able to make a diagnosis with the stethoscope, then you can also order further testing in a much more narrow range,” she says. “If you hear an odd sound and it makes you think of a certain diagnosis, then you know that you need to order this particular test where you could have a good diagnosis of what the problem might be.”

“You can take your iPhone and take a picture of the retina,” she says. “I’ve also seen people use the panoptic ophthalmoscope and project it on a screen so everyone in the whole room can see it. It allows you to do things in a group that really took a lot of one-on-one individual teaching.”

Portable ultrasound technology is also changing the landscape of medical education, as well as the experiences of providers and patients, says Dr. Kang Zhang, faculty member with the internal medicine residency at the school of medicine. Ultrasound technology is being used more frequently in conjunction with traditional methods of physical examination, Zhang says.

“The traditional physical exam is more by feel and by what we hear,” Zhang says. “The component of the ultrasound is that they can see the spleen touching their fingertips, or the liver or the thyroid. They can see what they’re touching, which makes them more confident with what they’re seeing and what they’re feeling.”

“We’re moving past the days of straight lecture in a classroom, and we’re trying to get our students experience as early as possible,” Gallaher says. “When it comes to anatomy, the clinical imaging modalities like ultrasound are the best way to do that.”

Students primarily learn through textbooks and through the school’s cadaver lab, Gallaher says, but ultrasound imaging provides students with a more thorough understanding of the living body.

“Much of what we do in the lab is about anatomical relationships,” he says. “When we’re in the lab we’re really trying to explore those relationships, but it’s kind of static, it doesn’t behave the way it would in their live patient. This imaging allows them to explore in that live, relevant model.”

Portable ultrasound imaging can also help patients to better understand their conditions, Zhang says. He recalls one instance in which a portable ultrasound machine helped him show a patient the reasoning behind a medical recommendation.

“I had a patient that had a clot in his leg, and he wasn’t sure if he wanted the blood thinners,” Zhang says. “I was physically able to show him the clot in his leg and that there wasn’t any blood flowing, and that inspired him to take the medication.”

“I’m seeing less and less emphasis focusing around the physical exam, and I think it’s because perhaps the electronic health record has really devalued what we do at the bedside,” Zhang says. “The physicians are spending less time at the bedside, less time to do that physical exam and it’s kind of being lost. Bring the learners back to the bedside, that’s the whole goal of this.”

Swanson says she believes medical schools are generally aware of the risk of technology creating distance between a physician and patients. To help aspiring physicians become more relatable to patients, the UW School of Medicine-Gonzaga University Regional Health Partnership has implemented a pilot program called A Daily Dose of Humanities, in which residents and medical students view a piece of art and discuss how the piece relates to medicine or to them personally.

“I think that’s our pushback against technology,” Swanson says. “All of this technology should enhance what happens at the bedside and not take away from it.”

To that point, Swanson says, “I would hope that the final consequence is that we send out medical students and residents that are much more comfortable with their physical diagnosis when it comes to the cardiac exam.”

Bergam says that’s precisely what she expects to happen in her medical education.

“I think, as a provider, I would feel more confident in diagnosing something earlier or just being able to recognize something earlier in my training,” Bergam says. “I think confidence from the provider is something patients will catch onto.”

Portable ultrasound machines can cost more than $600; some models cost as much as $5,000. Zhang says as ultrasound imaging becomes more portable and less expensive, it could be integrated into more office visits.

Bergam says experiences with technology like ultrasound and digital can help students to be more adaptable.

“It could translate to various aspects of medicine, whether it be a new drug or new technology,” Bergam says. “It could impact anyone, no matter what (specialty) you’re getting into.”