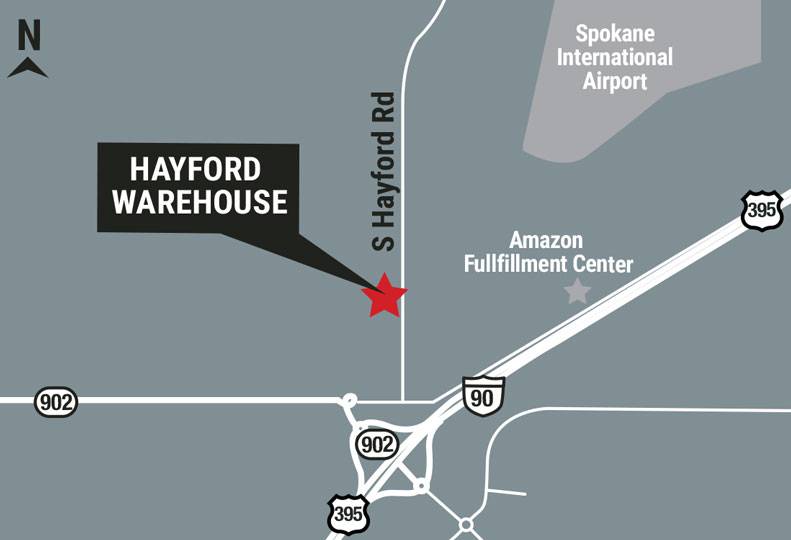 Plans have been submitted for another large warehouse on the West Plains, adding to the explosive industrial space growth that has hit the West Plains since Amazon.com Inc. raised its massive fulfillment center near Airway Heights.

The newly planned warehouse, in addition to at least two other warehouse projects currently in the works, would be added to the ever-growing slate of industrial work on the West Plains.

Amazon brought over 2.6 million square feet of warehouse space to the West Plains in 2020, with its $181 facility.

Since then, other developers have undertaken industrial warehouse projects in the area that, in total, will outsize Amazon’s feat, with a total of 4.2 million square feet either planned or underway.

The company postponed the development because of the pandemic but now plans to start work this year.

S3R3 Solutions, which is the public development authority for the West Plains area, also is adding to the thrum of construction on the West Plains, with plans to build a 30,750-square-foot warehouse just east of the airfield at the Spokane International Airport. Work on that structure is expected to start next month.

Todd Coleman, executive director of S3R3 Solutions, says one of the goals of the organization is to compile a portfolio of properties for new businesses.

S3R3 is in conversations with a few interested parties to occupy the space once it’s completed, but a deal hasn’t been struck, he adds.

“Hopefully, we’ll have something definitive before we get in the ground,” he says. Work on the structure is expected to begin in April or May, with completion by the fourth quarter this year.

The next biggest project would be a proposed Abbott Grove Commerce Park, which was assessing the viability of a 1.5 million-square-foot industrial park in late 2019. That project was issued grading permits in early 2020. The developer submitted updated environmental documents to the state in November, indicating the project is still in active planning stages.

Plans call for the site to be divided into a 59-lot commercial park, and for the construction of private and public roads and building pads.

The latest environmental plans show a minimum of 59 buildings were planned for the site.

Exotic Metals Forming Co., a Kent, Washington-based sheet metal and aerospace manufacturer, is continuing its manufacturing space expansion at its plant at 12821 W. McFarlane Road, in Airway Heights, with the addition of two 150,000-square-foot warehouses and a 25,000-square-foot storage facility.

The first of the two warehouses was completed in late 2020. A permit application for phase two hadn’t been filed by the Journal’s press time.

The McFarlane Industrial Park, currently under construction at 12315 W. McFarlane Road by AT Industrial LLC, adds another 187,000 square feet of space to the mix.

That project is valued at $15 million. It’s projected to be completed by summer.

Spokane-based pharmaceuticals company Selkirk Pharma Inc. also has broken ground on its planned 147,000-square-foot manufacturing facility on the 9100 block of west Granite Avenue, where the foundations have been poured, says Coleman. That project is valued at $38 million.

Collins Aerospace, a Charlotte, North Carolina-based aerospace manufacturer with a plant at 11135 W. Westbow Lane, is investing $145 million to its West Plains facilities, according to a press release from the company last March, and adding 75,000 square feet of manufacturing space to its Airway Heights location.

Kent, Washington-based Puget Sound Pipe & Supply, a pipe valve and fitting manufacturer and retailer, plans to construct a 19,500-square-foot warehouse and office building at the southwest corner of Flint Road and U.S. 2, where it will establish Spokane-area operations. The company applied for permits in late January for the $2.5 million structure. Beacon Builders LLC, of Spokane, is the contractor on the project, according to the permit application. The project was designed by Fusion Architecture PLLC, also of Spokane.