Infill on the outskirts: More homebuilders look to small towns for available land 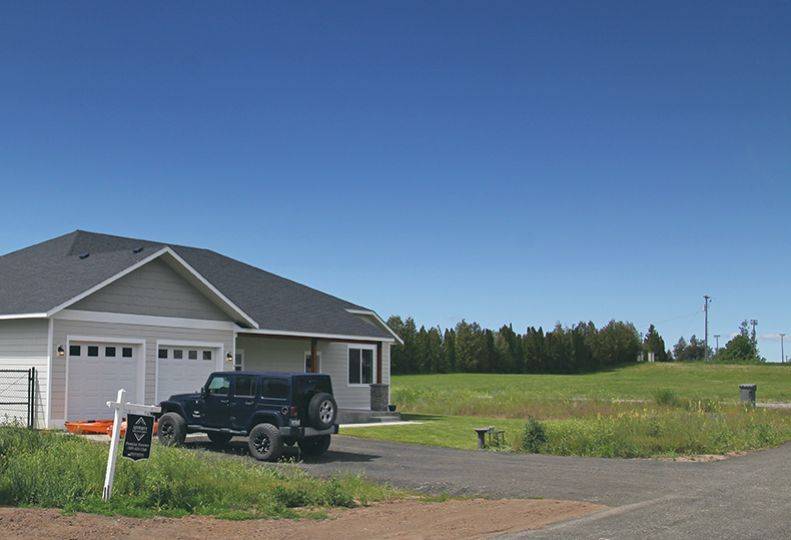 -—Karina Elias
New homes rise in the small town of Reardan, Washington, which is about 22 miles west of Spokane.

Small towns that are within an hour’s drive of Spokane are seeing an increase in new home starts as developers turn to them for buildable land as infill opportunities in the urban area become harder to find, industry and planning officials say.

In the town of Spangle, about 20 miles south of Spokane, a development tentatively named Wheatland Estates is in the works that aims to build 190 residential units, which likely would more than double the population of the entire town. As of the 2020 census, the population of Spangle recorded 231 residents with a median household income of $61,400.

Steve Nelson, of Spokane Valley-based Century West Engineering Corp. is the on-call engineer for the rural town. He says he’s been seeing population growth within these small communities in recent years.

Under the state’s Growth Management Act, Nelson says, there is an area within Spangle under which such residential development is encouraged.

The GMA requires counties and cities with a certain population and growth rate to establish urban growth boundaries to encourage in-fill development and limit urban sprawl. Most types of development are prohibited outside of those boundaries.

“Spokane is filling up these areas,” says Nelson. “Developers are looking for places nearby, and Spangle is one of them.”

In an application filed with the city and presented before the Spangle Town Council, the preliminary plat of the Wheatland Estates proposes to divide 51 acres into 190 lots for single-family residences. The typical lot size  ranges from 8,000 to 9,600 square feet.

The development site, which historically has been agricultural land, doesn’t have a physical address assigned yet. It’s located within a roughly triangular-shaped area east of U.S. 195, southwest Old State Route 195, and northwest of Cheney-Spangle Road, preliminary planning documents show.

The application was submitted by Spokane Valley based-Whipple Consulting Engineers Inc., which is tasked with designing the development’s water and sewer systems infrastructure.

Allyson Andrade, marketing and communications coordinator for Whipple Consulting, says that water and sewer infrastructure planning is nearly complete, and the construction on the development will begin within the next couple of months, after Nelson and the state Department of Health have reviewed it.

Nelson, however, says the Department of Health typically takes six to eight months to review such plans.

Andrade declines to identify the developer.

The current owners of the land on which Wheatland Estates is to be located are Robert and Janice Sievers. Robert Sievers says he is still in talks with potential developers and declines to give further details regarding the development plans.

A similar trend in infill development is being seen in the town of Reardan, in Lincoln County, about 22 miles west of Spokane via U.S. 2., says Nelson.

Developers within Lincoln County, however, aren’t subject to the same GMA guidelines.

Courtney Thompson, planner with Lincoln County Land Services, says that when the GMA was enacted in 1990, Lincoln County didn’t meet the population and growth criteria that would require it to define an urban growth area.

Two born-and-raised Reardan developers say they’ve seen steady population growth in their hometown over the past couple of years.

Simon Butterfield, general contractor and owner of Advanced Construction & Environmental Services LLC, which does business as ACES, plans to build single-family homes and duplexes ranging in size from 1,500 to 2,000 square feet on 18 lots in Reardan.

The 18 lots, which are roughly 12,000 square feet each, are within city limits, in the northeast side of Reardan, off of Railroad Avenue, he explains.

Butterfield also sits on the board of the Reardan-Edwall School District, where he has witnessed growth of 30 students per year, in a school district that now has two schools and about 700 students.

“Reardan is in a natural progression and is becoming more desirable,” says Butterfield, who remembers when “going to the city” meant driving 45-minutes to downtown Spokane.

“But now, with Airway Heights growing and having the amenities we need, it’s only 15 minutes,” he explains.

Butterfield says most units he has built have been bought by Reardan locals. He also has noticed an uptick in the speed at which residential units are purchased or rented. Three years ago, he built a few duplexes that stood vacant for up to three weeks between renters. Now, he is renting units within three days of them becoming vacant, he says.

“We have no problem selling,” he adds. “Everything we have built is selling within two to four weeks on the market.”

Joe Holwagner, an independent contractor in Reardan, says he’s two months from completing a 1,400-square-foot home on 525 E. Summit. The three-bedroom, two-bath property is listed for $420,000 and doesn’t have a buyer yet. To the west of that project is another home he completed last year and quickly sold to a family from Spokane Valley. To the east of the new construction is vacant land where he plans to build an additional five homes, one at a time, he says. All the water and sewer infrastructure has been completed there, he adds.

Lincoln County Assessor Scott Liebing says that homes in Reardan were assessed last year, and that he has witnessed sales prices jump as much as $100,000 since then.

“The most notable thing is our market is mirroring that of Spokane’s more than ever before,” he says.

In the 16 years he has been in office, he claims he has never witnessed the Lincoln County home prices roughly equal home prices in the Spokane housing market.

“In Reardan, we still have some vacant land,” he says. “What bare land we have is selling quickly. Builders are scarfing them up.” he says.

The town of St. John, about 50 miles south of Spokane, in Whitman County, is another community that Nelson says could be in for a big growth spurt. The town of 612 people, as of the 2020 Census, has one home being built and few others that were halted due to the price of materials, supply chain issues, and other factors, says St. John town clerk, Shani Hergert.

Additionally, there’s talk of a new housing development in the west side of town, although it hasn’t been reviewed yet by the city engineer, Hergert says.

“We have quite a few houses for sale in St. John,” she says.

There’s not much available to rent, Hergert says, adding, “When they do come up, they are gone before the word spreads across town.”