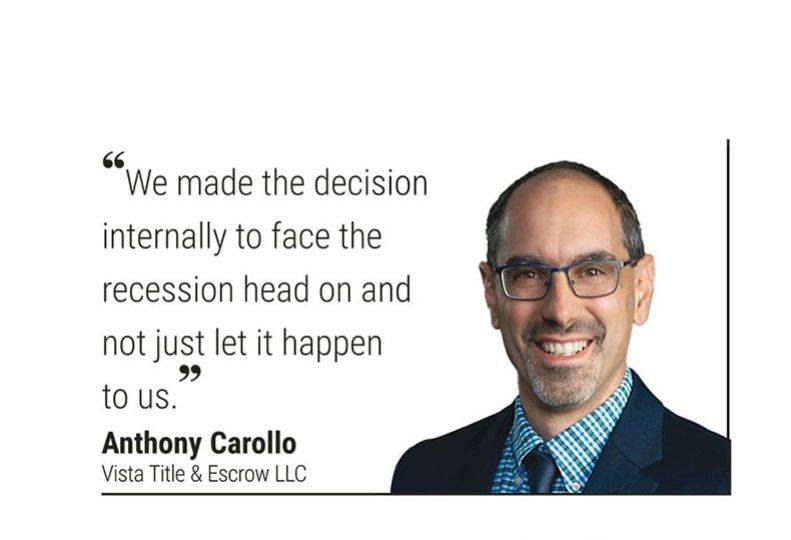 Business for title insurance companies is down this year, caused by declining numbers of purchase and refinance transactions, representatives of title companies here say.

Rather than recoil in a contracting market, however, those companies are expanding to open new offices in an effort to earn more of the market share in the county.

Those companies are searching for ways to overcome declining revenue through what is expected to be a prolonged market downturn.

“I think we’re definitely in a recession,” says Anthony Carollo, CEO of Spokane-based Vista Title & Escrow LLC. “We made the decision internally to face the recession head on and not just let it happen to us.”

The function of title insurance companies is to provide evidence of an owner’s legal authority to sell their property. Title insurance also ensures there are no liens against the property and covers legal issues due to fraud and divorce claims that may arise when transferring property titles. It also protects against prior forgeries that may have occurred, as well as mistakes in legal documents, and offers homeowners protection from someone challenging the ownership of the property.

Carollo says the company uses opened and closed title insurance orders to determine its volume of business. Open orders are the title orders requested at the beginning of a real estate transaction, including purchases and refinances, and closed orders are the completed title requests.

The volume of open title insurance orders for purchases this year has decreased by about 8%, he says, and closed title orders declined about 14%.

“When orders don’t get completed, it’s because a deal fell apart or the buyer backed out, or some other reason,” he explains.

However, he adds that Vista Title is making gains in its market share, and those gains have helped buoy the impact of declining order volumes.

“It’s still down, but maybe not as much as it would be,” Carollo says, adding that Vista’s overall open business is down 25% and closed business has declined 34%.

In a bid to earn more of the market share in Spokane Valley, Vista Title has leased 1,600 square feet of office space in a multitenant building at 12209 E. Mission, a move that Carollo says will bring the business closer to its clients in the Valley.

The new office will be the fourth location for Vista Title and its first office presence in Spokane Valley.

Another title company, WFG National Title Co. of Eastern Washington, is preparing to open a new office as a strategy to earn business from competitors and increase its market share as well.

Kevin Ferguson, division president of WFG, says the company is negotiating a lease for an office on Spokane’s North Side and expects to occupy the space in November.

WFG is headquartered in Portland, Oregon, and operates two offices in Spokane County: one at 25 W. Cataldo, in Spokane, and the other at 1420 N. Mullan, in Spokane Valley.

Ferguson says WFG also has experienced a dramatic decline in business from 2021.

“Everything is down, but particularly refinances have virtually disappeared, which you would expect because they’re unlikely to refinance their 2.5% (interest rate on a loan) to 6.5%.”

WFG is typically resale heavy, and for most of this year, resale orders have carried the business, Ferguson says.

“Now, we’re going back to a seasonal market and expect it to go down the fourth quarter and the first quarter of the year,” he says.

Ferguson adds that the market may see a rebound in Q2 2023 as additional homes are expected to hit the housing market, which could entice more buyers to join the market again.

He explains that the current market downturn was to be expected because of the recent 10-year period of growth, “so we were due.”

Ferguson says, while some in the industry were unhappy with the Fed’s decision to increase interest rates, homebuyers should feel some reprieve from competition for homes as more inventory becomes available.

“It’s steady but a little bit slower,” White says. “There are still refi’s out there from people refinancing for divorce reasons or death. Plus, home equity lines of credits are doing well right now, so we’ve seen a shift and a definite reduction due to interest rates.”

White explains that, for purchase orders, the title company’s fees are based on the purchase price. Even though home prices are still climbing, the company’s revenue has declined as a result of declining title orders.

“We had a great first half of the year this year, but compared with last year, business is down overall,” says White, adding that the year will probably end in a decline.

Carollo explains that Vista Title is prepared to cut some expenses to invest in other ways to generate new revenue.

“North Spokane is probably the No. 1 home sale market in our area and Spokane Valley is No. 2 just looking at the number of home sale transactions,” Carollo says. “We’ve never had a Spokane Valley presence, and we already have a lot of customers out there.”

Vista will move staff around from its three other offices to work at the Spokane Valley space, says Carollo.

Vista Title currently operates two Spokane County locations: one at 201 W. North River Drive, in downtown Spokane; and the other at 801 W. Francis, in North Spokane. A third office is located in Stevens County, at 280 S. Oak, in Colville.

Carollo says the Colville office, which was purchased from Stevens County Title last fall, offers Vista Title an opportunity to expand its loan servicing services there to Spokane County as another way to add revenue and diversify business.

“Stevens County has a much different market with more rural land transactions than we have down here, and those aren’t as seasonal as the residential market,” Carollo says. “Stevens County also has a contract-servicing department for when a seller wants to finance a home purchase for the buyer.”

Carollo says Vista’s Stevens County office has seen an uptick in seller-financed purchases recently, so it’s a natural fit to build that business line in the Spokane market.

“The Spokane market is a half-million people, and there’s only one competitor down here for contract servicing,” he contends. “We see a real opportunity to gain some of that market share.”

Carollo adds, “We’re doing everything we can to think about where we can go out to get revenue where we currently don’t have it or how can we build on what we already have.”