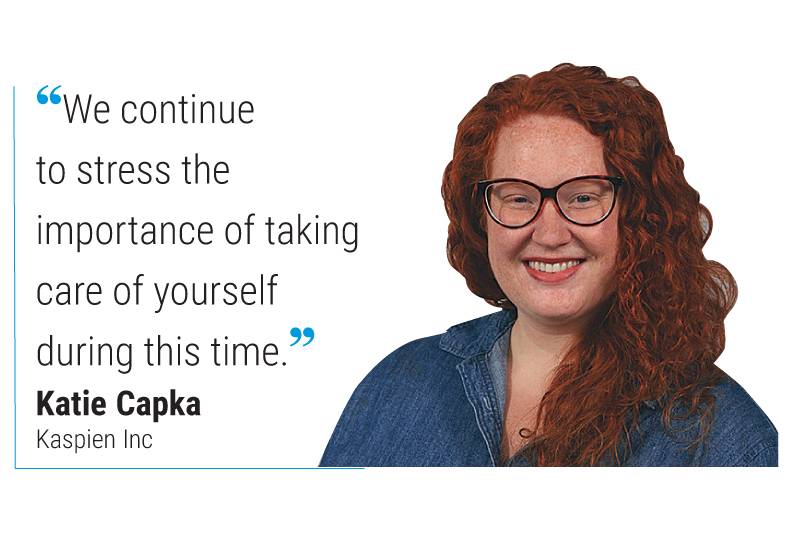 In Liberty Lake, Insight Enterprises Inc. has provided financial assistance through its foundation for employees whose spouses lost their jobs.

And Kaspien Inc., in Spokane Valley, formerly known as etailz Inc., has made sure its employees take time off from working at home to avoid burn out.

Seven months into the COVID-19 pandemic, human resources personnel across the region are earning their keep in more ways than the now absentee workplace has ever seen.

“There’s some concern about seeing employees burn out,” says Katie Capka, who serves as the inbound marketing manager at Kaspien. “We continue to stress the importance of taking care of yourself during this time. Our leadership promotes this.”

Across Spokane and Kootenai counties, nearly three-dozen businesses shared with the Journal what adjustments they have made since the pandemic’s arrival. Business owners, managers, and human relations staff completed surveys for this year’s Best Places to Work in the Inland Northwest event in which the winners were announced during a virtual event on Wednesday, Oct. 7.

In addition to taking the obvious steps of shifting to remote work or staggering work shifts to reduce roster counts at any one time, many companies reported going above and beyond such efforts to accommodate their workforce.

Capka contends managers at online retailer Kaspien have made it a point to stay engaged continuously with their more than 150 employees, the majority of whom are working remotely.

Capka says the company will launch an exercise challenge starting next week since employees no longer have access the fitness room at Kaspien’s offices, at 2818 N. Sullivan Road.

“In the office, we had amazing services like weekly yoga and circuit training, so we’re excited to be offering this to our employees as we continue to navigate this new normal,” she says.

Kaspien’s fitness challenge is organized by its insurance provider, Cigna, which set up an activity-based wellness program that promotes healthy lifestyle through virtual social connections and physical activity, she says.

“Employees can either join as a team or an individual, and the team or person with the highest participation gets recognized,” she says.

“It gave our employees a chance to not only reconnect with one another, but to get outside and get the creativity flowing,” she says.

Capka says such activities have long been a part of the company’s culture, something that has the potential to suffer when people don’t see each other daily.

At Kaspien, employees who have been there more than a year qualify for unlimited paid time off in place of traditional vacation arrangements. She says the company changed its time-off policy a few years ago. All time off must be cleared by a supervisor.

“It’s a trend we’re seeing with more and more tech companies,” according to Capka. “We haven’t seen anyone abuse it.”

In the weeks after remote work began in the wake of the pandemic, Capka says managers stopped seeing requests from employees to take time off.

At Inland Power & Light, the Spokane-based electric cooperative located at 10110 W. Hallett, the utility quickly managed to move all its office staff to remote work from home.

She says the company’s information technology units got 40 people working from home in a 48-hour time span.

“We’re just as efficient as we were before,” she says of the utility, which has a total of 90 employees.

Office personnel are scheduled to return to their individual workstations starting at the beginning of 2021 provided it’s safe to do so, she says.

Lutz says the cooperative also broke field crews into smaller teams and have them working out of nearly a half-dozen warehouse locations across Spokane County that the company uses for storage of power lines and poles.

Other survey respondents shared a wide range of ideas they implemented for their employee base.

Career Path Services of Spokane, an employment and training nonprofit, writes, “We’ve expanded our personal development reimbursement funds to allow employees to purchase items to set up their home office.”

The tribal community Marimn Health & Wellness Center, located on the Coeur d’Alene Indian Reservation, in Plummer, Idaho, says it has offered additional benefits to employees, including “some bonuses and extra time off, to give employees a chance to take care of themselves as well.”

At a company such as Post Falls-based Pointe Pest Control, remote work is only available to 23% of its 219-member workforce, says Erin Graffeo, the company’s human resources manager.

With more people working from home, Graffeo suspects more people might notice pest problems as a result of being home so much.

“Our customer service teams surveyed homeowners in a more detailed way than before,” Graffeo says.

While crews continued to enter the homes and treat them using proper social distancing measures, Graffeo says in many instances, customers opted to have just the exteriors and surrounding properties of their home treated, she says.