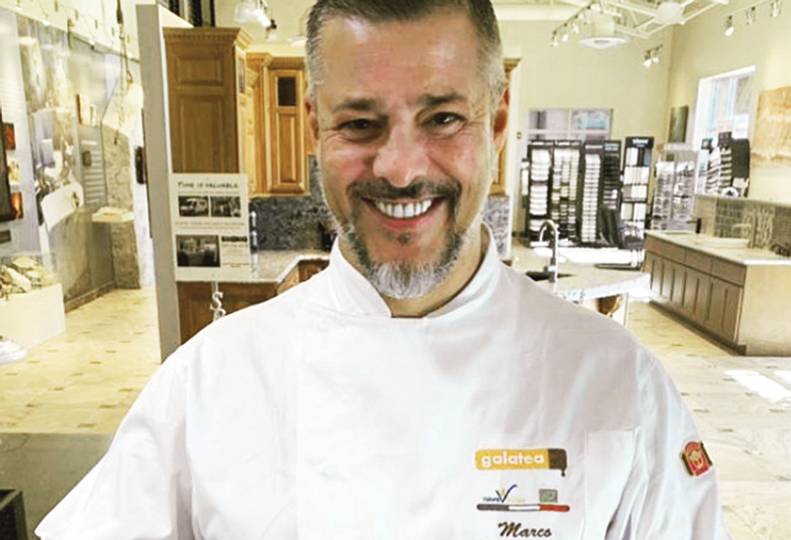 -Ashley Napolitano
Marco Napolitano was born in Italy and has been making gelato for 35 years. He and his wife, Ashley, expect to open Tre Palline Gelato Napolitano in mid-January.

A gelato shop is coming to Steam Plant Square in downtown Spokane this winter.

Marco has been in the gelato industry for more than 35 years, Ashley says.

"He started as a teenager," she says of her husband. "It was his very first job."

Marco is from Italy, where he spent years perfecting his gelato-making skills. He's lived in Spokane for about four years, while Ashley has spent a total of 18 years in the Spokane area.

Gelato is a frozen dessert with roots in Italy. Much like ice cream, it's made from cream, milk, and sugar. However, gelato traditionally doesn't include eggs, contains less butterfat, and is denser than ice cream. It's also served a few degrees warmer than American ice cream.

Marco has been involved in helping start several gelato shops in the U.S., Canada, and Europe. He spent several years in Germany, where he met Katie Stillert. Last year, he helped Stillert launch Gelato by the Lake, in Coeur d'Alene.

In Spokane, however, Ashley says the couple perceived an unmet market for fresh gelato.

"We've noticed that there's definitely a need for authenticity when it comes to gelato," Ashley says. "We're authentic in our ingredients. All of our stuff is made in-house, from the toppings to the drizzles to the sauces."

"Downtown is the heart and soul of Spokane, and we're excited to be in the Steam Plant because it has such a historic background," Ashley says.

The shop will be open noon-8 p.m. Tuesday through Saturday. Ashley says she and Marco will be the shop's only employees to start.

Tre Palline will offer 30 flavors, such as pistachio, amarena cherry, mint chip, dark chocolate, and banana, as well as traditional stracciatella, a creamy gelato with chocolate chips. Many seasonal flavors also will be available on a rotating weekly basis, and Ashley says dairy-free, egg-free, vegan, and gluten-free options will also be available.

"It's gelato pressed to look like spaghetti," Ashley explains. "We do our own strawberry sauce on top of the pressed gelato, and then white chocolate shavings."

Marco claims to hold the Guinness World Record for the heaviest spaghetti gelato, which weighed in at 240 kilos, or about 530 pounds. Ashley says the couple hope to be able to recreate the giant frozen confection for events such as Bloomsday or Hoopfest.

In addition to gelato, Tre Palline will offer shakes, sundaes, and espresso. Gelato cakes will be available for pre-order.

Tre Palline also will offer catering for events, Ashley says. She's also working to set up delivery via apps such as DoorDash.