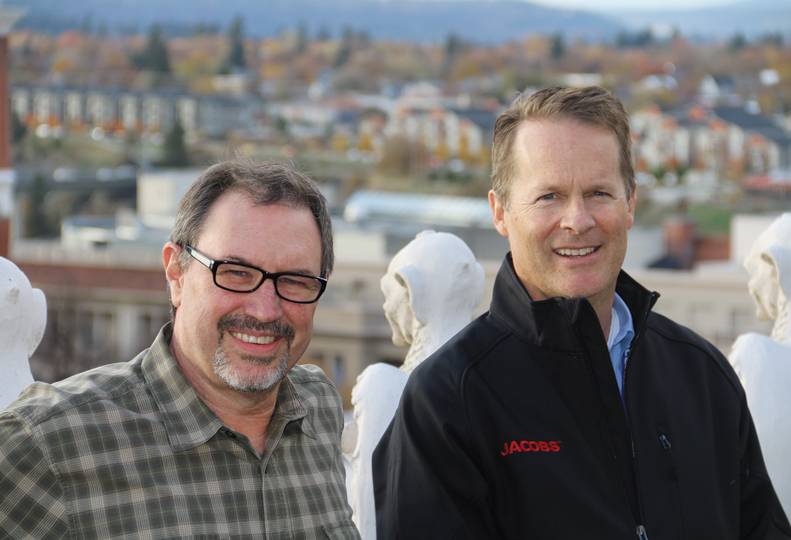 -KEVIN BLOCKER
Mark Burrus, left, and Larry Mattson are among the 20-plus employees who work in Jacobs’ downtown Spokane oﬃ ce, which is located in the Spokesman-Review building.

Two years after acquiring the former CH2M Hill engineering firm, Dallas-based Jacobs Engineering Group Inc. wants to expand its portfolio of work around Spokane the way it has in other parts of the state.

Prior to Jacobs acquiring the former Denver-based company for $3 billion, Jacobs didn’t have much of a presence in the Pacific Northwest, says Larry Mattson, a Spokane-based client account manager for Jacobs. The acquisition, however, immediately gave Jacobs multiple offices in Washington state, including offices here and in Bellevue, Richland, and Yakima.

With a Spokane office located in a fifth-floor suite in the Spokesman-Review building, at 999 W. Riverside downtown, the company employs 35 people here, which includes 13 licensed engineers.

Services the company provides to the treatment facilities range from biochemistry and chemistry projects to physical infrastructure duties at the plant.

Mattson says the company will unveil a new branding campaign near the end of this month. In its most recent published quarterly report, in June, the company reported $11.6 billion in revenue.

The company is involved in several projects across Spokane; however, the company has charged Mattson with growing the business in and around Spokane, he says.

The more notable projects Jacobs is currently working on include the design process with the Spokane Transit Authority for the Central City Line, a six-mile, corridor-based bus rapid transit route that will extend between Browne’s Addition neighborhood and Spokane Community College via downtown Spokane and the University District.

The modern-style electric bus system eventually will be capable of providing more than a million rides per year. Mark Burrus, Jacobs’ transportation director here says the firm wants to have initial renderings to STA by Thanksgiving.

“I would anticipate that the transit authority will start construction of stations in the spring,” he says.

The firm also is serving as a subcontractor to Spokane-based Information Builders Inc. on the STA’s Monroe-Regal Line, a route that is scheduled to offer frequent, all-day service covering north and south Spokane.

The Monroe-Regal Line is a major north-south corridor that will include the 11.4-mile route connecting STA’s Five Mile Park and Ride and a planned Moran Station Park and Ride, which will be located at the northeast corner of east 57th Avenue and Palouse Highway.

The route is planned to offer service every 15 minutes for 12 hours a day on weekdays, and at least every 30 minutes during evenings, weekends, and holidays.

Currently, Jacobs is involved in roughly 50 projects across the Spokane area as either the lead contractor or subcontractor, Mattson says.

As a multinational and national firm, however, it’s not uncommon for Jacobs’ employees to share work in other markets, he says.

“But we really want to be able to have a positive impact in the Spokane community by hiring people that live here, work here ... have a stake in the long-term health of Spokane.”

Occupying a sales-based position with Jacobs, Mattson resides in Yakima and spends a considerable amount of time traveling across Eastern Washington.

“So much of what’s underground is old,” Mattson says. “It’s 50 years to 100 plus. It’s kind of like remodeling your house. You peel the drywall back and discover knob-and-tube wiring,” he says of the early method of electrical wiring commonly done from the 1880s to the early 1940s.

“Throughout cities across the country, you can pull the asphalt back, start digging and find manholes made of brick and water pipes made of wood,” he says.

Jacobs is also involved in planning efforts with cities studying their assets and helping them establish water and transportation priority plans based on their needs and resources, he says.

Though he spent the past 20 years working in Seattle for a transportation company, Burrus graduated from Ferris High School in 1982 and eventually earned his bachelor’s degree from Gonzaga University. Upon his return to the Lilac City, Burrus says he was reminded quickly of Spokane’s tough road conditions.

Mattson and Burrus say this region of the state is the only one they’ve encountered where the weather conditions have such a big impact on road conditions.

They say the company expects to see continued growth for Jacobs in the areas of support for transportation and water.

“It is tough for the city and the county to keep up on the roads here because of the freeze-thaw occurrence,” Burrus says of Spokane. “They just degrade so quickly.”

Jacobs and CH2M were founded within a year of each other in the mid-1940s. CH2M’s area of expertise was in water infrastructure and environment; Jacobs established its strongholds in aerospace, energy, industrial, and infrastructure sectors, Mattson says.