Prestress concrete maker to consolidate operations, employees under one roof at site near Washington-Idaho border 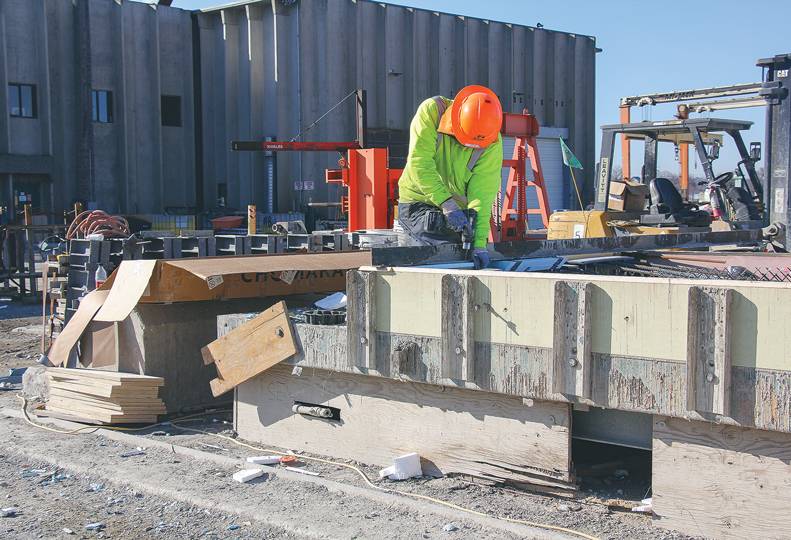 -File Photo
A Knife River employee works on a project at the company’s current facility in Spokane Valley. Much of the complex’s workspace is outdoors.

The Spokane Valley facility was constructed in the 1960s, he says.

“The facility is doing well, but it’s largely outdoors,” Gay says. “There was a lot of support for investing in a newer, modern facility to replace that 60-year-old model. Unlike our current facility, almost all of the manufacturing operations will be under one roof. It’ll create a much better environment for our workforce.”

The new facility will include about 188,000 square feet, 20,000 square feet of which will be dedicated to offices. The rest will provide covered space for employees to work in. At its current facility, Knife River has about 26,000 square feet under various roofs, Spilde says.

While the new facility will be smaller than Knife River’s current operations, Gay says production will increase as a result of an increased focus on operational efficiencies.

The new facility site will be situated on 45 acres of land. That’s about half the size of Knife River’s current 85-acre site at 922 N. Carnahan Road, which Spilde says includes about 37 acres of unusable gravel pit area.

“Our footprint will be smaller than our site today, but the actual capacity is significantly higher by using technology,” Gay says. “It’s a lot more automated and controlled.”

Overhead cranes will make the facility more efficient and safer, Gay asserts. Concrete will be delivered to casting beds by an automated bucket system.

“We expect that we’re going to be almost doubling our girder production capacity,” Gay says.

Knife River purchased the property for $1.8 million late last year, state real estate tax records show. The company broke ground on the new site in June and will be working on foundations and erecting walls for the remainder of the year.

“Our goal is to be moved into the new site by July of next year,” Gay says.

The cost of the project has increased significantly as the construction industry continues to grapple with cost increases and materials shortages. The original permit for the facility showed valuation of about $18.6 million.

“We’re now $40 million in total project value,” Gay says. “Like a lot of construction, the cost has gone up from our original estimate.”

Spilde says the rising cost of steel has increased the project’s price tag.

“The building has a steel roof, and at 188,000 square feet, that’s a lot of roof,” Spilde says. “Most of the rest of the structural components are precast concrete, which is great for us—very durable and cost-effective.”

Gay says the process of identifying a new site for Knife River has been challenging.

“There aren’t a lot of properties left that are available for industrial purposes,” Gay says. “You’d think there’s a lot of property around, but when you start looking for a 45-acre site with those capabilities, it’s limited.”

There was some debate about whether the company should remain in Washington or seek a new location in Idaho, Gay says. Knife River CEO David C. Barney settled the matter ultimately.

“He said, ‘where are our employees today?’” Gay says. Gay replied that most of Knife River’s operations here are staffed by Washingtonians. Barney said the decision was a simple one: remain where the workforce is located.

The Spokane Valley facility has been involved in many construction projects in the Spokane area and around the Inland Northwest, including in recent years the Davenport Grand Hotel downtown, the Amazon.com Inc. distribution facility on the West Plains, and a concrete salmon passage flume in partnership with Spokane-based Garco Construction Inc., near Cle Elum, Washington.

Before Knife River acquired the Spokane Valley facility last year, the prestress concrete concern was owned by Oldcastle Infrastructure. Before that, it was owned by CPM Development Corp., then known as Central Pre-Mix Concrete Co.

Knife River was founded in Harrisburg, Oregon, in the 1950s and was later acquired by MDU Resources Group.