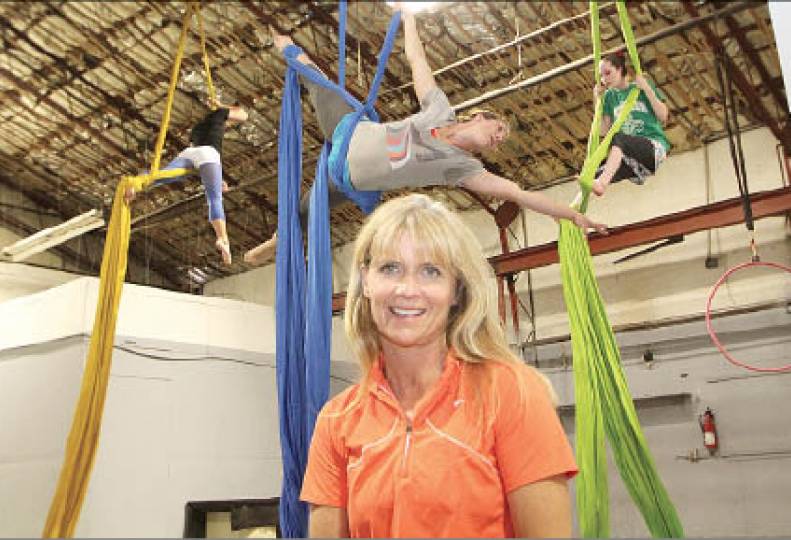 Sherrie Martin got into aerial performance arts—the types of airborne tricks you might see in a Cirque du Soleil show or in a circus—completely by accident.

Martin, a former gymnast, says that before opening Spokane Aerial Performance Arts LLC, located at 5503 E. Broadway, she and her husband, Pat, had been looking for a few years throughout the West Coast for a place to buy or open their own gymnastics teaching facility. However, she says, they hadn't found anything that was priced right or that fit their business vision.

While Martin says she stopped competing in gymnastics long ago, throughout her adult life she's kept up with the sport by taking private lessons, specifically focusing on the uneven bars.

During an extended stay in San Francisco last year, Martin says she signed up for some private lessons at a gym so she'd be able to work out while there.

"On accident I ended up booking circus lessons," Martin says. "I ended up doing that and a bars lesson, and I took two silk lessons and one on the static trapeze. While I was there, I thought that it was a lot like gymnastics, and it's really beautiful and a great workout."

She adds, "My husband and I looked at each other and we thought, 'This is it, gymwise.'"

Martin and her husband opened Spokane Aerial Performance Arts last September and now teach others interested in learning such stunts.

Martin jokes that none of the gym's students have run off to join the circus yet, and says the majority of them enjoy learning the high-flying acrobatic skills as a way to stay in shape, or to master tricks and perform in front of an audience.

The acrobatic tricks taught at the couple's 5,400-square-foot gym are performed on apparatuses such as 36-inch diameter, suspended hoops and 20-foot-high aerial silks, which are suspended pieces of high-strength fabric on which performers twist, flip, and twirl.

Martin says Spokane Aerial started out renting space at Spokane Gymnastics, in Spokane Valley, during times when there weren't any gymnastics classes scheduled there. Martin says that meant the aerial courses didn't start until 8 p.m. during the week and only ran on Sundays during weekends.

At the beginning of last month, the Martins moved the business into its own space in a former industrial warehouse at the Broadway address, just west of Spokane Gymnastics.

Suspended from the structural steel beams of the building's ceiling are eight aerial silks, which also are referred to as tissu—with the letter 'e' purposefully left off—or ribbons, Martin says.

"It's not really silk, it's a nylon fabric that's been weight tested, and it has stretch in it and can hold up to 3,000 pounds," she says.

Performers on the aerial silks twist the fabric around their feet, hands, legs, arms, or torso to hold static poses in acrobatic positions, like the splits or an artistic back bend, similar to moves a gymnast or dancer might perform. By wrapping the fabric in special knots or loops, performers also can let go with their hands and drop their body down the length of the silks in flips and twists, stopping in mid-air.

Martin says that because of the strict safety regulations required at acrobatic training facilities like Spokane Aerial, the silks must be inspected weekly for any strains or even the tiniest pin holes. Performers aren't allowed to wear any jewelry or clothes with zippers when they're on the silks, because that could snag and ruin the expensive fabric, she adds.

Martin says that because of the specialty rigging hardware needed to suspend the fabric 20 feet above the ground, each silk costs around $600 to buy and set up. She says that when setting up new equipment, the business contracts with a specialist here who's been trained on how to suspend acrobatic performance gear safely so it's secure for performers to use.

When the couple found the space that Spokane Aerial now occupies, they had to take into consideration the maximum load of the steel trusses holding up the building's roof so they could safely suspend equipment that can hold the weight of performers, Martin says.

Aside from offering lessons on the aerial silks, Martin says students can learn skills on aerial hoops, which are also called the lyra, and a rope-like apparatus called a Spanish web.

She says those classes are intended for kids age 7 to 15 years old, since the facility doesn't typically teach the aerial skills to kids under 18.

Martin says the most popular techniques that Spokane Aerial's instructors teach involve the aerial silks. She teaches most of those classes for intermediate-level students and also coaches students who want to create a full performance routine.

An aerial teacher based in San Francisco instructs Martin how to teach aerial skills to others, and she says that she also likes to bring in guest teachers to help advance students' skills beyond what she can demonstrate or teach.

In September, an aerial artist known as Cheetah, who's based in Los Angeles, is scheduled to come to Spokane Aerial's facility to teach performance workshops and to conduct a fire-eating workshop, she says.

Martin says of the main aerial apparatuses, her favorite to perform on is the aerial hoop, but adds that she'll also climb up the silks using just her arms to build strength.

She says her husband also teaches a class on the silks for men and a beginner's class for women.

Aside from that and overseeing day-to-day operations of the business, Pat Martin also works in the commercial real estate industry and owns Martin Partners Real Estate, which does business here and in Arizona.

Spokane Aerial has seven other part-time instructors who teach classes, and Sherrie Martin says some of those instructors also are students in upper-level skills classes.

Between 14 and 20 hour-long class sessions are offered at Spokane Aerial each week, including a core foundation class for students to work on their core and upper-body strength, which Martin says is key to being able to climb up to the top of one of the aerial silks using just the arms and hands.

Aerial classes cost between $55 and $130 per six-week session, with classes taught once or twice a week, Martin says. Students enrolled in a course also can come in during open gym hours to practice their skills for $2, she adds.

The facility also offers an aerial yoga class, in which participants do various yoga poses on a single aerial silk that's suspended about three feet off the ground like a hammock.

Martin says many of her students take multiple classes a week, and estimates that the business has close to 250 students who are enrolled in at least one class.

On the first Friday of each month, around 10 or more students taking lessons at Spokane Aerial perform routines on the aerial silks and hoops at Savory Restaurant & Lounge, located at 1314 S. Grand on the South Hill.

Martin says that since the gym began having its students perform there each month, starting last December, the restaurant usually has been packed on that night.

"We take any level of performers, and some do very simple routines but it's very pretty," she says, adding that one student who's 54 years old did an aerial silk routine at a recent performance night there.

"I think for a bunch of people, positive self-image is huge, and even the smallest accomplishments are important," she says. "It's hard to lift yourself with just your arms. Even with the younger kids in the circus class, to have coordination and balance and to offer a sport mixed with an art is so important."

Martin says the ages of students at Spokane Aerial range from young kids to people over 40 who are mainly looking to reap the physical benefits of the sport.

"Most of the performers are doing it as a hobby that's fun, and because they like to perform, but then there are some people who have never performed before," Martin says.

In addition to the monthly performances at Savory, Martin says she's been approached by several other business owners who are interested in having Spokane Aerial's students perform at various events.