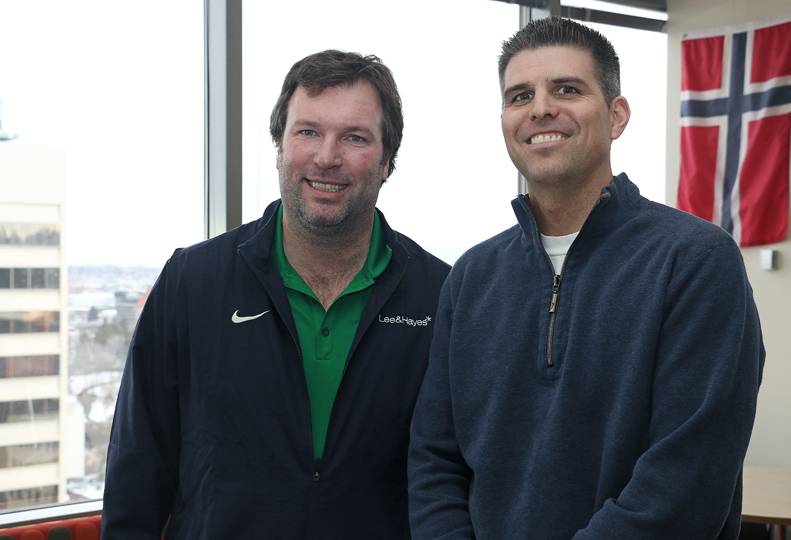 -Natasha Nellis
Richard Denenny and Rob Hartman say there’s a growing concern that some Spokane-area companies are at risk of commoditization if they fail to protect their intangible assets.

For the first time since the stock markets opened in the U.S. in 1817, most of the value of the top five S&P 500 companies is comprised of intangible assets, says Richard Denenny, president of Spokane-based intellectual property law firm Lee & Hayes PC.

A generational shift in asset classes has occurred as more companies accrue value through intellectual property, patents, and other intangible assets, he says.

With that shift, there’s a growing concern that Spokane-area companies are at risk of commoditization if they fall behind the pack and fail to protect their intangible assets properly.

Commoditization is the process in which goods or services that have economic value and are distinguishable by brand end up becoming mass-produced unspecialized product.

“As a factual matter, the market is rewarding innovation, more specifically, protected innovation,” he says. “And people don’t necessarily focus on that or are as aware of it as they should be.”

Lee & Hayes, which occupies roughly 27,000 square feet of space in the Bank of America Financial Center at 601 W. Riverside, employs approximately 160 employees nationwide, 80 of which reside in the Spokane-area. The company employs approximately 80 attorneys, and while Denenny declines to disclose annual revenue, he says the company has seen substantial growth year-over-year.

Denenny says that when services and products are available universally, it creates a downward pressure on pricing, making protection for ideas important.

In the U.S., companies have a one-year grace period to apply for a patent after they publicly announce their idea.

Startup companies, or even established companies that don’t apply for patents or intellectual property protections are at risk of losing the rights to their ideas and innovations, and what’s more, of increasing the amount of competition in their industry.

Companies in Kootenai County were awarded 35 patents in 2015, a 40 percent increase compared with patents issued in 2000.

“It took us 121 years for us to issue our first million patents,” says Denenny. “We did it in the last three years, and over half of all issued patents have been issued in the last 30 years.”

Rob Hartman, partner and patent attorney at Lee & Hayes, contends that Spokane could be a city that the next great, innovative company comes from.

“I think if we’re going to stay behind the innovation curve, then there could be some negative effects for Spokane,” he says. “I think what we really want to do is continue to drive to be a part of that, we want these companies to come out of Spokane.”

That’s an idea that Denenny says is already starting to take hold in the community, with organizations like Startup Spokane, Mind to Market, and Ignite Northwest working to help people start and maintain their own organizations.

“I think we have a real opportunity in this community to leverage innovation for our overall benefit,” he says. “That’s not to say that there won’t be and there isn’t disruption.”

Some of that disruption comes in the form of job losses to autonomous machinery and the manufacturing industry, leading to a reluctance to participate in creating such innovations.

However, Hartman contends that autonomous vehicles, machinery, and the technology that accompanies it is unavoidable and it would be better for Spokane to take advantage of the resources available and get ahead of the curve and create opportunities for growth.

“I just read an article recently about San Francisco, and I saw there’s a bunch of (initial public offerings) about to come on,” he says, referring to recent announcements from Uber, Lyft, and Airbnb, among others, about their intentions to become publicly traded this year.

“When these IPOs happen, they’re going to create thousands of millionaires, from C-level suite folks down to engineers,” Hartman asserts. “That is an opportunity that would never have presented itself if it wasn’t for innovation. While commoditization can occur in lots of ways, (innovation is) a way to avoid commoditization.”

Denenny says organizations that file patents and intellectual property rights have a constitutional right to protect their ideas.

“The market rewards innovation,” he says.

“Innovation by definition is disruptive, and Spokane has a choice, at an individual entrepreneur level and as a community on what we want to do with innovation.”