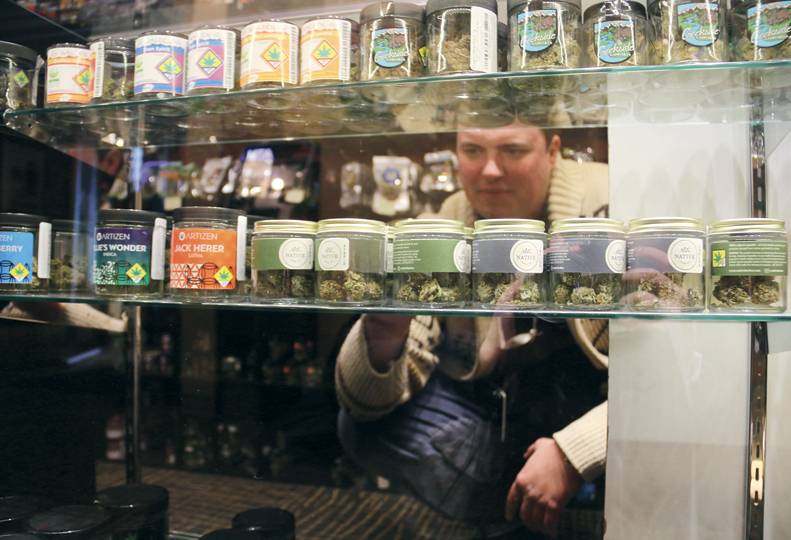 Marijuana sales countywide and statewide continue to climb, albeit at a more gradual rate this year than in previous years, retailers and analysts say.

Their observations are reflected in data released recently by the Washington state Liquor and Cannabis Board.

In fiscal 2019, which ended June 30, Spokane County marijuana retailers brought in $108 million in cannabis sales, up 7% from $100.7 million in sales the previous fiscal year.

At that growth rate, Spokane County kept pace with the state as a whole. Statewide, marijuana retailers’ total sales crested $1 billion for the first time, for a 7% increase compared with $972.5 million in fiscal 2018.

It’s a far cry from the industry’s infancy in the state, when 2015 county and statewide sales were around $37 million and $260 million, respectively.

“I think it’s fairly stable right now,” says Doug Peterson, owner of Locals Canna House cannabis retail store, in Spokane Valley. “There are seasonal contractions in cannabis, just like in any other industry.”

From spring through late summer, sales are strong, Peterson says, peaking in early autumn. During the winter, sales see a downturn, with small spikes in sales activity around the holidays.

“I was seeing a flattening of retail sales coming into this year,” MacRae says. “When I look at retail sales, (they) really spiked up in the past few months.”

Between May and August — the height of cannabis’ busy season — revenue from cannabis sales in Spokane County increased by 16%, while statewide revenue increased by 12%, MacRae says.

As the market matures and data is collected, it’s becoming easier for retailers to predict sales patterns, Peterson says.

“We’re getting to a point now where the recreational industry (has been around) long enough where we can actually start seeing trends emerge, where we can understand patterns,” he says. “It’s more like traditional industries, where we can sense the times when we’ll have increased traffic and when (the market) is going to contract. It’s hard to know that until you have some historical data behind you.”

Like sales, Peterson says, supply and demand have begun to settle as well.

“There used to be excess (product) in the market in prior years … this year, I think it’s leveled off,” he says.

However, some parts of the market still have issues keeping pace with demand: MacRae says there’s a lingering constraint on the supply of products for extraction.

Product bound for extraction is typically either cannabis in its whole flower form that isn’t of a quality a store would want to sell, he says, or it’s trim, the leftovers from trimming the flowers. Trim and low-quality flower are processed into concentrated THC, which is then consumed through a method called dabbing, in which concentrate is heated and inhaled, or is infused into products such as edibles.

In addition to availability of some products, owners are concerned about increased competition.

Eric Skaar, owner of Spokane Valley cannabis retail store Sativa Sisters, says Sativa Sisters faces an increase in competition as more stores have opened in Spokane Valley, compounded by the fact that the shop on East Trent Avenue is located near a cluster of cannabis stores.

MacRae says competition provides a substantial challenge to most retailers.

“It’s extraordinarily difficult to do well in this industry,” MacRae says. “It’s possible to survive, but it’s tough. The folks who are sticking it out and maintaining their position in the industry are troopers.”

However, Skaar says Sativa Sisters — which brought in about $3.6 million from January through August of this year — is still doing well.

“We’re happy with where we’re at, considering we’re a destination location,” Skaar says. “We feel like we’ve done a good job of holding our own.”

That’s despite retail prices for many products, including flower, having bottomed out, says Skaar.

“My guess right now is that prices aren’t going to continue to drop, going forward,” Skaar says. “If anything, I think they’ll either hold steady or possibly increase in about six months.”

The number of retailers has held steady at about 425 throughout Washington, MacRae says. Consequently, he attributes the overall steady rise in revenue to an increase in volume sold, either to seasoned cannabis consumers or to people new to the market.

Skaar concurs, saying, “We’re getting more people coming in, and new people who have never been in before, even five years in.”

Diversity of clientele has increased, Peterson says, especially as more products such as infused creams and transdermal patches have entered the market.

“I was the son of a traveling evangelist preacher, and my mom would have never set foot in a cannabis store,” he says. “She comes in all the time — she doesn’t buy anything, but she feels comfortable in our establishment.”

As the state’s cannabis industry has ramped up, a wider variety of products has appeared on the market, says Shilo Morgan, owner of downtown Spokane cannabis retail store Lucky Leaf Co.

Visitors from other states that have legalized recreational use of marijuana comment on the wide range of products available in most retail stores here, MacRae claims.

“Our regulations have allowed us to develop a very sophisticated infused products submarket, and that’s usually edibles and drinkables,” MacRae says. “You can get (infused) potato chips, granola mix, infused teas, little three milligram micro mints, stuff like that. It’s a very robust market in terms of variety and innovation.”