Massive U District complex to move forward next month

298 living units to be built along Spokane River 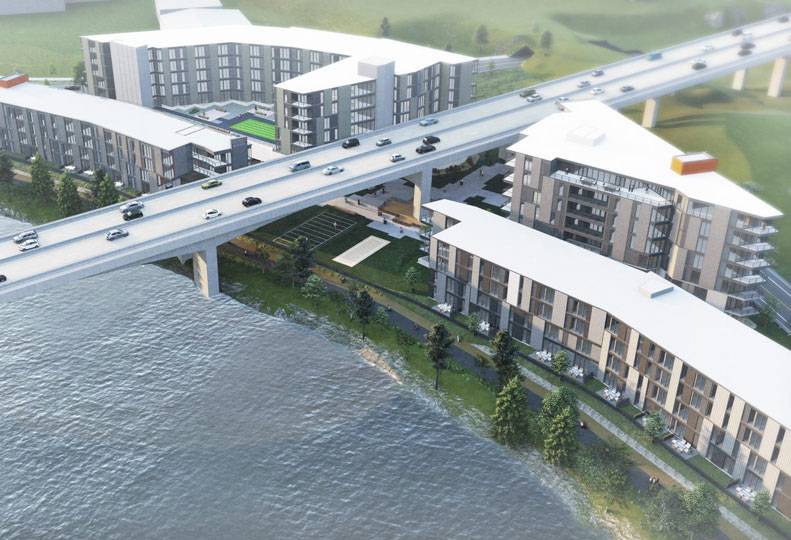 -ALSC Architects PS
The 298-unit apartment complex is to be called simply The District.

Phoenix-based Sagamore Spokane LLC is moving forward with plans to build a 298-unit apartment complex overlooking the Spokane River in Spokane’s University District, according to a press release from the development company.

Newly dubbed The District, the development was originally named the Riverbend Apartments in preliminary documents that estimated the construction value at $45 million.

The permits for the project, which includes four apartment buildings on 13 acres of land, were approved by the city of Spokane after a prospective purchaser consent decree was reached by the Washington state Department of Ecology and the state Attorney General’s Office and was approved in a Spokane County Superior Court order, according to the press release. The decree will help to guide the redevelopment of the property that had been contaminated by past industrial uses.

The development team intends to break ground on the first phase of the project in April, according to the release.

Charles Dubroff, Sagamore Spokane principal, says in the release, “We are thrilled to have this project underway. Our riverside parcel presented several unique challenges and opportunities that we wanted to make sure were addressed in a way that contributed to the long-term health and growth of the University District.”

Swinerton Builders, which has an office in Spokane, is expected to be the contractor, according to the release. Spokane-based ALSC Architects PS designed it, while Construction Management & Development Inc. has been acting as the owner representative.

The site previously was occupied by the Spokane Manufactured Gas Plant and American Tar Co., according to information about the project on the Department of Ecology’s website.

Lars Gilberts, CEO of the University District, says in the release, “The District is helping fulfill our mission to make the University District the preferred live, learn, work, play urban environment in the Intermountain Northwest. This also delivers on Spokane’s 50-year push to transform our railyards into a vibrant and walkable urban core along the Spokane River.”