Role said to be challenging as university competes for students in ongoing U.S. decline in enrollment 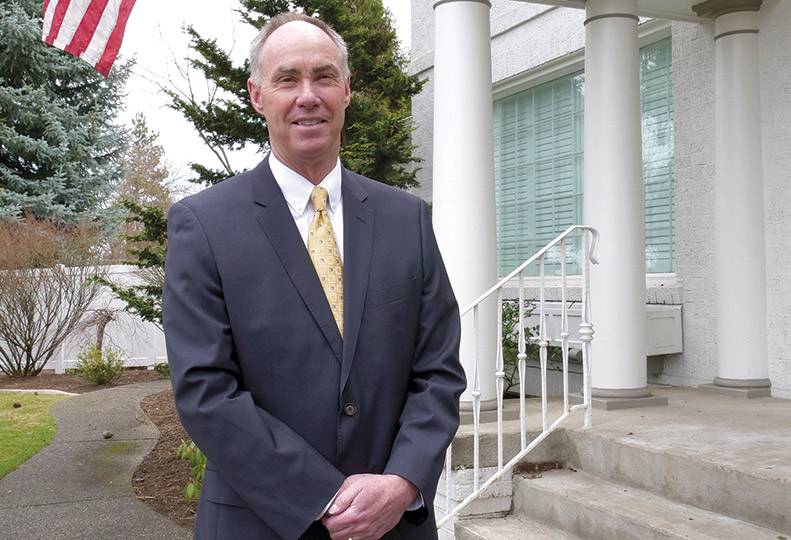 -—Virgiinia Thomas
Scott McQuilkin took over as president of Whitworth University in January, after serving in an interim role for a number of months.

Scott McQuilkin, Whitworth University’s new president, is taking the helm of the university at a time when Whitworth is focusing on its health and science programs, and while enrollment is dropping at higher education institutions throughout the U.S.

“It is a competitive environment for students at all levels,” McQuilkin says. “There are a number of regions in the country, particularly the Northeast and the Midwest, where … they have a number of undergraduate schools, and their populations are shrinking, so they are seeking students from everywhere else in the country. In the state of Washington, there are dozens of full-time admissions counselors from schools in other states.”

According to a National Student Clearinghouse report released in January, colleges and universities in the U.S. have seen undergraduate enrollment decline by about 6.6% since fall 2019.

While colleges have been anticipating the coming “demographic cliff”—McQuilkin says about 500,000 fewer high school students will be entering postsecondary education institutions by 2025 due to impacts of the 2008 recession on the U.S. birthrate – none were prepared for the effects of the COVID-19 pandemic.

“Students have now endured a couple of years of COVID education,” McQuilkin says. “Are students as prepared as they normally would be, coming into a college setting? It feels like there are more students taking a gap year who’ve just been exhausted over these last two years.”

It’s a challenge to understand what current and prospective students will need in the next few years, he says.

“We have to be nimble in such a way that we look at how this world has changed in that we are never going back to exactly where we were. So what does the demand for programming look like, even in online education?” McQuilkin says. “Are there spaces that Whitworth can and should win in continuing studies, graduate programs, and online education?”

Whitworth is in the early stages of creating a five-year strategic plan, McQuilkin says.

The university has been dedicating more resources to its health sciences programs in recent years, and McQuilkin says that momentum will continue. A dedication ceremony for Whitworth’s new 38,000-square-foot Dana and David Dornsife Health Sciences building is scheduled for today, April 21. In 2020, the Dornsifes pledged $10 million to Whitworth’s health sciences programs.

McQuilkin says that in addition to focusing on cutting-edge information and programming in health sciences, Whitworth plans to meet rising demand for science, technology, engineering, and math degrees, as well as business programs. The university is examining ways to offer more advanced degrees.

“We will always remain strong on undergraduate education. That is our bread and butter, who we are,” McQuilkin says. “We know that there are adult markets out there where we need to find our niche.”

McQuilkin was well versed in Whitworth’s culture long before he was appointed president of the university in January, having been employed at Whitworth in various capacities for about three decades.

McQuilkin arrived on Whitworth’s campus as an 18-year-old in 1980, originally intending to study computers. He decided he couldn’t face the idea of sitting in front of a screen every day and instead considered options of becoming a pastor or a high school English teacher.

“Then, I was playing college baseball here, and I caught the bug of being a coach,” McQuilkin says. “I was hired in July of 1984 as Whitworth’s head baseball coach. I was the youngest college head baseball coach in the country at the time.”

McQuilkin hadn’t yet completed his undergraduate degree in physical education with minors in math and religion. He went on to earn a master’s degree in education from Whitworth and a doctorate in sport history from Penn State University.

After he graduated from Penn State, he joined Whitworth’s faculty as an assistant professor in kinesiology, and over about 25 years, he climbed the ladder to director of athletics and professor of kinesiology.

In 2009, he was appointed vice president for institutional advancement, where he supervised fundraising, marketing and communications, and alumni and parent relations. However, he missed the contact he’d had with students during his coaching and teaching days.

“In (the vice president) role, important as it was—working with donors and alumni and our external constituencies—I had very little in the way of student interaction except for our kids,” McQuilkin says. His wife Janice and their three children are also Whitworth alumni.

“When I got to be in (the interim president) role, my interactions with faculty, staff, and students greatly expanded,” McQuilkin says. “That took me back to where I’d been for all those 25 years.”

As the university launched a nationwide search for a new president, McQuilkin considered applying for the position, but decided against it, he says.

He asked himself three questions: “Could I do the job? Do I want to do the job? Could I get appointed for the position?”

In answer to the first question, McQuilkin says he did believe he can do the job.

“But it didn’t matter, because, on the other hand, what was in the best interest of the university? I was convinced that, as the interim president and somebody who I expect would have been viewed as a viable candidate, my presence would have suppressed the applicant pool.”

McQuilkin says he thought of Bill Robinson, who served as Whitworth president from 1993 to 2010.

“He was one of the most important people in the history of the institution,” he says. “Bill would not have applied at Whitworth in ’92 or ’93 had the interim been a candidate, and what a loss that would have been for Whitworth. I had to make sure I was not involved, on the chance that I would have been preventing the potential for another Bill Robinson.”

However, the committee charged with finding a new president was unsuccessful in securing a candidate to appoint to the position.

“The board came to me in December and asked whether I would then consider being open to the conversation,” McQuilkin says. “It was at that point I entertained the question.”

McQuilkin says he doesn’t put much thought into his leadership style.

“I don’t dwell on it, I just try to be,” he says. “My responsibility in this role and others I view with the prepositions ‘with’ and ‘for.’ I work with people and for people. I want the institution to be the best. I hope I disappoint people at a rate they can tolerate.”