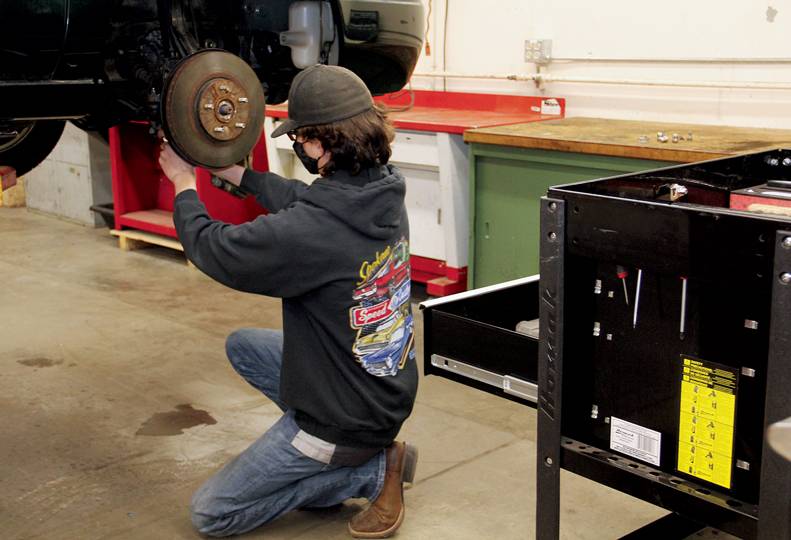 -Virginia Thomas
Nolan Langford works on a vehicle at the the NEWTech Skill Center, located at 4141 N. Regal in East Spokane. 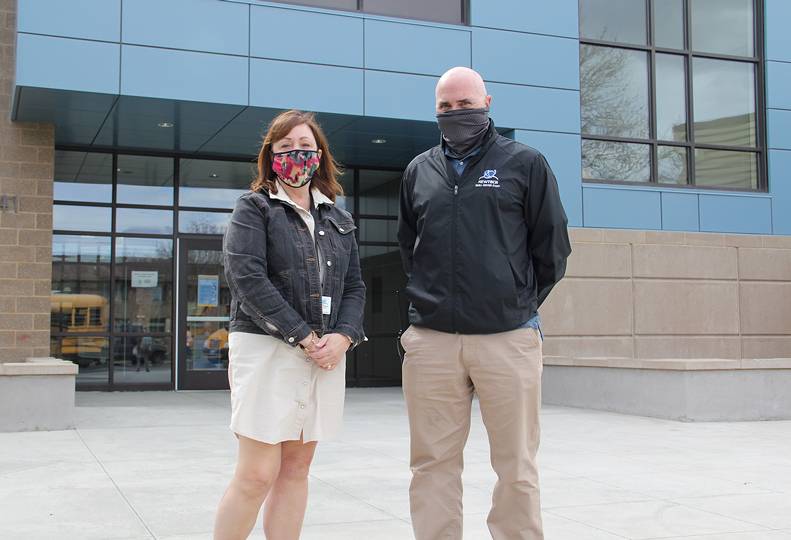 -Virginia Thomas
Karene Duffy and Patrick Lenihan say 26 of the 30 people who work at NEWTech are teachers, and all of those instructors have extensive industry experience.

At NEWTech Skill Center in northeast Spokane, about 700 students are enrolled in 14 programs, and administrators say new programs will offer additional opportunities to benefit students and employers.

NEWTech, a technical skill center located at 4141 N. Regal, is working to start up a diesel mechanic program. Karene Duffy, the center’s director, says NEWTech has fielded an increase in interest in diesel programs from both industry and students.

NEWTech intends to request funds from the Washington state Legislature to construct a dedicated space for the diesel program, she says.

“We’d really hoped to be on the list for funding for the capital project this year, and we didn’t make the initial cut, so we’re hoping we will this next biennium,” she says. “Part of that is to build a nice diesel shop that’s a pull-through type for big (rig) trucks. For now, we have to start with more of the mid-sized diesel (vehicles), but the theory is the same.”

Some students from NEWTech will go directly into a job in their chosen field after graduating from high school, and others will continue their education at a technical school, college, or apprenticeship, Duffy says.

“Our programs all are preparatory. That’s a requirement of the skill center,” she says. “That means there has to be an industry-recognized certificate .... or college credit. It’s at a more in-depth level than an exploratory course.”

Most students who apply to NEWTech are juniors or seniors.

“Some of the internships require that they be 16,” Duffy says. “For instance, the cosmetology program, they have to be 16 by the day class starts to be able to count their hours toward their cosmetology license.”

She says employers in the construction, welding, and automotive industries have been especially keen to work with interns from NEWTech.

“When times are good and there’s plenty of employees, businesses don’t tend to look at 17- and 18-year-olds as much,” Duffy says. “Now, when there’s a lot of work for a lot of the trades and they need employees, they have been strong proponents of working with the students.”

Duffy says she hopes NEWTech will expand its internship partnerships with local companies.

“Our goal in that next couple of years is that we hit the month of May and it’s a ghost town here because our kids are all out at internship sites and our teachers are out making the rounds and checking on students at internship sites,” Duffy says.

“We’ve adopted simulated workplace strategies,” Lenihan says. “Our students are in professional dress similar to what they would have to wear in industry. They clock in and clock out … like they would for a job. If they can’t make it in, they’re asked to contact their instructor, just like they would a manager for a shift.”

Typically, NEWTech’s enrollment is around 800, but Duffy says many students found it difficult to learn in the hybrid model the center used. Typically, students attend instruction at NEWTech for 2.5 hours, five days a week. The rest of their day is spent in core classes such as math and English at their high schools.

However, for most of the 2020-21 school year, students came to NEWTech for two hours once a week to work in cohorts of five. Now, they’re at the center for two hours, two to three times per week.

“We had some kids who just said, ‘I can’t see taking a welding class without being able to be here more to weld,’” Duffy says. “We have kids who are coming back this fall as seniors, who decided to wait a year.”

About 760 students have been placed at NEWTech programs for the fall semester, Lenihan says. The center will accept applications online through August.

Students earn 1.5 high school elective or career and technical education credits per semester, which are applied to their high school transcript.

Each program has a $50 uniform fee, but NEWTech doesn’t charge tuition.

The center is funded through the same mechanisms that fund K-12 public schools. Duffy notes that NEWTech receives a higher rate of funding than other schools due to the expensive equipment programs require.

NEWTech was started in 1983 as Spokane Area Professional Skill Center, Duffy says. The center changed its name in 2013 to North East Washington Tech Skill Center. It’s one of 14 skill centers in Washington.

Duffy says NEWTech operates like something between a public school and a community college.

“We are an odd hybrid of both worlds,” she says.

NEWTech is governed by an administrative council composed of superintendents from each of the 11 school districts NEWTech serves.

Spokane Public Schools is NEWTech’s host district, Duffy says. The building is owned by the district, which maintains it through a capital maintenance fund into which all 11 districts pay. SPS also handles payroll and human resources for NEWTech.

For capital requests such as new construction or remodeling, NEWTech must request funds from the Washington state Legislature.

Duffy says each program is guided by people who are involved in the corresponding industry.

“We pull together people from industry who are interested in serving on an advisory committee, and they help us decide what equipment is needed, what is the best curriculum to use, what texts to use,” she says.

Of the 30 employees at NEWTech, 26 are teachers, Duffy says.

“All of our teachers come from industry,” she says. “They have a minimum of 6,000 hours of industry experience. On average, ours have closer to 10,000 hours.”

Teachers obtain their teaching certificate before coming to NEWTech, Duffy says, and bring years of experience in their chosen field to the classroom.

“They have the street credibility with the kids. They have that understanding of what’s required in industry,” Duffy says. “That’s huge with students.”