Project will have 21 units; work set to start this fall 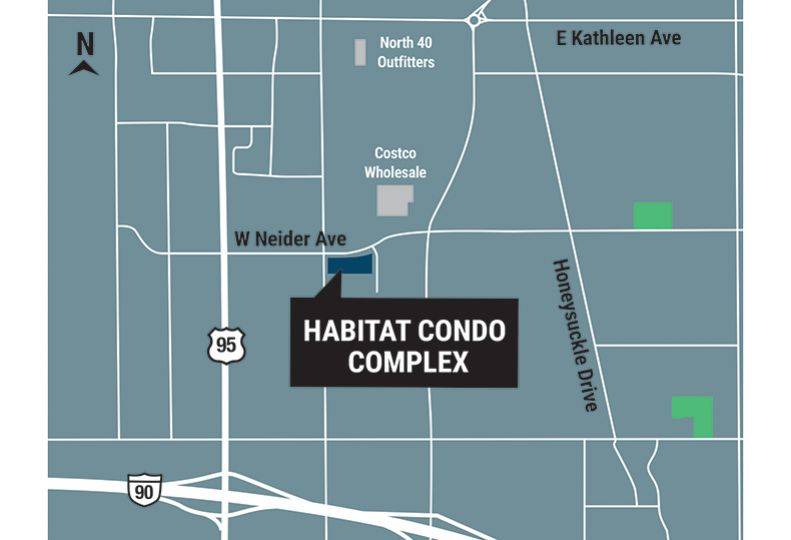 Habitat for Humanity of North Idaho Inc. is preparing a 1.5-acre site to construct a $4 million, 21-unit condominium development in Coeur d’Alene.

The site is located at 3246 N. Second, about a block south of the Costco Wholesale Corp. warehouse store in north Coeur d’Alene, says James Casper, executive director of the nonprofit housing organization.

Casper says Habitat for Humanity of North Idaho will be the contractor for the affordable housing project and work with client families and volunteers to construct four buildings on the property.

“We do have a construction supervisor who has the experience to be in charge of building a project like that,” Casper says. “We’re actually in a place where we are thinking of hiring, for the first time, more than one construction staff, which will allow us to build a little bit faster.”

Site plans show two four-unit structures will be located to the east and west of a planned eight-unit building, and a five-unit row house on the east side of the lot, for a total of 21 residential units.

“This fall, they plan on constructing the first building, which is the town home building,” Walker says.

Casper says the goal is to have all four buildings underway before winter weather sets in.

Design plans haven’t been finalized yet, but Casper says the condos will range in size from one bedroom to five bedrooms.

“The reason for that is to try to accommodate different family sizes. It can be a single person all the way up to a family with quite a few kids,” he explains.

“The for-profit development process is trying to make bigger, luxury houses that makes them more money per unit,” he says, adding that Habitat provides homebuyers with another option to get into a smaller, affordable home.

Walker adds, “(Habitat) normally does single-family homes, but because of the land value increasing in our area, they’re going to condo the project, so they can sell the condo to an individual buyer and Habitat would maintain ownership of the land.”

To keep prices down, the cost of the units won’t include the land, he says.

Designs and amenities at Habitat’s condo complex will be minimal.

“The main goal of the project is to try to provide high-quality homes at the cheapest price, so there aren’t a lot of frills,” Walker says. “For example, there’s no closed garages on the property. It’s all open parking, but it will have all the basic amenities.”

The condos will range in price from about $130,000 for a one-bedroom unit up to $260,000 for a five-bedroom unit, which Casper says is comparatively inexpensive, considering the current housing market.

Casper says Habitat for Humanity of North Idaho plans to develop similar projects in Kootenai County once the condo development is complete.

“There’s never been a greater demand for affordable housing, at least in Idaho,” Casper adds.

Idaho benefited from low property values and slow growth for much of the history of the state, he contends.

“It’s a really unique and recent phenomenon that you have such high prices that affordability for housing is such a complicated problem,” he says. “We have to figure out how to do something to help the people who are increasingly demanding it.”