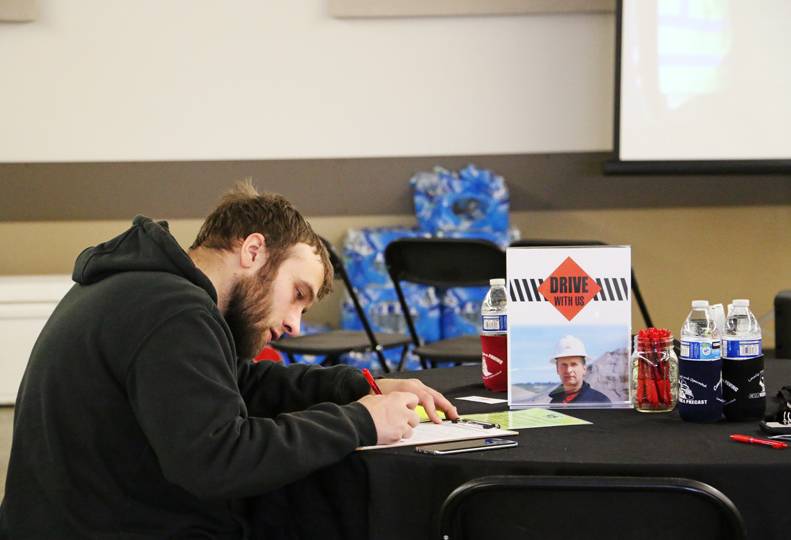 While one man sits at a table in the center of the room, pouring over his application and preparing for his third interview of the day, another is in and out before his engine gets cold.

The atmosphere is calm, as the office dogs Luna and Charlie roam the space and employees clad in neon-yellow sweatshirts line the walls, amicably chatting while they wait for their next candidate to approach.

It’s a rare moment of quiet at Coeur d’Alene Paving Inc.’s first job fair earlier this month, which had more than 20 applicants in addition to 20 to 30 employees in the room at the start of its event at the Kootenai County Fairgrounds in Coeur d’Alene.

Coeur d’Alene Paving took advantage of a growing trend in company-specific job fairs this March to help fill more than 30 job openings companywide it had at the end of winter.

“We are casting a very wide net,” says Bridget Sundahl, controller for Coeur d’Alene Paving. “With the seasonality of our work, it’s kind of difficult to get employees to come in at the right time. We’re ready to start paving when the snow is gone, so we want to get people on board, trained, and ready to hit the ground running.”

More organizations, including Kootenai Health and Spokane Public Schools, are turning to individual, or company-specific, job fairs versus larger group fairs or other means in an effort to capitalize on the efficiency of vetting large quantities of people in a short time.

“Several large businesses in our region … have hosted their own job fairs for years, but it seems like we are now seeing an uptick in the number of small businesses doing the same,” he says.

The department doesn’t have data on the success rate of such fairs, as it currently doesn’t track these events, but he says a larger group job fair hosted by the department in mid-March had 30 businesses in attendance attempting to fill 500 job openings, and the fair had an estimated 50 to 60 job seekers attend.

“Most businesses were happy to get just one or two good prospects from this event,” he says.

Sundahl says the company has attended several other group career fairs but felt the exposure wasn’t as powerful as hosting a single-company job fair.

That led the company to launch a Build with Us campaign, which advertises open positions, the culture of the company, and the potential to advance and build a career.

Holli Virgil, marketing director for Coeur d’Alene Paving, says the campaign reached over 15,000 people online and had over 175 shares on social media.

The reasoning behind the individual job fair is also to increase efficiency, says Sundahl.

“It’s overwhelming to hire so many people and interview them one by one,” she says. “It’s very time consuming and it draws the process out. In this fashion … we’ll be able to evaluate them in a shorter amount of time. It’s a more efficient process.”

“It was beneficial for the candidates to meet and mix with the owners, foreman, crew members, office staff, and even the dogs,” she says.

Coeur d’Alene Paving is expanding its concrete and paving operations this year as well, says Sundahl, which will require the hiring of more administrative staff to keep up.

She says she expects the companies paving operations will expand by 20 percent this year, and the company plans to build a second concrete batch plant at the Stateline plant location with an accompanying shop, which will require more employees.

Virgil says the fair had over 60 attendees, and the company received several applications. Following the event, it received resumes from people who couldn’t attend. As of March 21, 11 employees have been hired from the job fair, she says.

Owners Todd Kaufman and Craig Cozad say they were happy with the results of the fair, and that if the company were to have a large number of openings again, they’d hold another fair.

At Spokane Public Schools, spokesman Brian Coddington says the school district hosts company-specific job fairs on a regular basis, it’s most recent being in February, as the district often is looking to fill positions that require specific skills.

While it does participate in larger job fairs, he says, the pool of applicants usually isn’t at the quality Spokane Public Schools is looking for and only one to two applicants are usually hired per fair.

Coddington says the district-specific fair typically has a large turnout, and the job candidates tend to be of higher quality than those at multiple vendor fairs.

“Recruitment and hiring practices are always being reviewed and refined,” he says. “We’re always looking for new ways to identify people who want to come work for Spokane Public Schools and who have the skillsets necessary to meet the needs of our students.”

The proximity of the fair helps current Kootenai Health employees advance their careers because they can come down on their break, have an interview on-site, and go back to work so they don’t have to block out a large amount of time to do so, Wolfinger says.

It generally takes 15 to 30 minutes for recruiters to screen applicants at a job fair, she says, and it cuts down on the possibility of applicants not returning for a second or third interview, because everything is taken care of that day.

“While they’re here, we can have multiple interviews taking place,” she says. “And having them do a face-to-face interview right away … or do a quick tour. And that really solidifies for them … if they’re going to be a good fit going forward.”

Typically, Kootenai Health sees between 30 and 70 attendees, not including internal applicants, Wolfinger says. It holds at least one fair per season and blitz, or rapid hiring, events will be held multiple times a year depending on need.

While attending larger fairs has value, she says, the company is competing with other organizations for the best applicants and usually only one to two employees are hired from such events.