2020 saw a record $10M in grant awards, well above amount in previous year 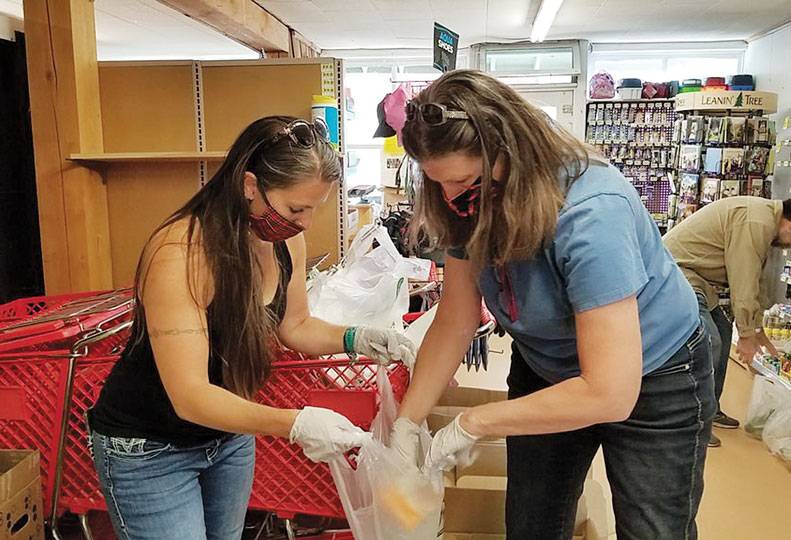 -Innovia Foundation
Heather Kestner, left, and Karen Crosby bag food to take to central Idaho residents. They were among the volunteers with ties to Innovia Foundation who stepped up early in the pandemic.

When Innovia Foundation CEO Shelly O’Quinn moved all office operations from an antiquated database server to a cloud-based system, she had no idea how big of a deal the decision ultimately would be.

“It was painful at the time,” says O’Quinn, who took over as CEO in 2017 and initiated the move shortly thereafter.

O’Quinn hardly foresaw the arrival of a crippling global pandemic looming on the horizon.

“It was just important for the team to have all the tools they needed in order to be successful,” she says.

Those tools and shift in operations proved to be critical because once COVID-19 arrived in the U.S., the nonprofit agency didn’t miss a beat as its 13 employees were able to begin working from home immediately, she says.

The foundation was able to receive and distribute money to its nonprofit partners in order to help those in immediate need, she says.

In response to the pandemic, Innovia, with the help of the city of Spokane Valley and Spokane County, secured $28 million in funding through the Coronavirus Aid, Relief, and Economic Security Act. Meanwhile, charitable contributions from private donors to Innovia reached $4.5 million, and an All-In Washington COVID Relief Fund grant generated another $3.3 million, she says.

“The pandemic has definitely ignited generosity,” O’Quinn says of the amount of private contributions that came to Innovia.

Between mid-April and mid-June last year, in the immediate aftermath of stay-at-home orders issued by Washington Gov. Jay Inslee and Idaho Gov. Brad Little, Innovia managed to distribute 300 community-based grants totaling $3 million to its nonprofit partners for people in need of food, housing assistance, and many other forms of help, she says.

In normal times, it generally takes six months to get $1.5 million out the door and into the appropriate hands for distribution, she says.

O’Quinn says Avista Corp., Spokane County, and The Equinox Foundation of Sandpoint, Idaho are among a plethora of Innovia’s partners that helped deliver many forms of assistance to communities across the region.

In addition to its regional partners, Innovia’s network of approximately 200 volunteers helped make it possible to get immediate needs, specifically food, to those confined to home, she says.

“What we saw last year, and are still seeing, is a regional collaborative effort to what is a tragedy,” she says.

Innovia serves a 20-county footprint that includes 10 counties each in Eastern Washington and northern Idaho. The service area encompasses 38,000 square miles and has a combined population of 1 million.

Prior to remote work, Innovia operated primarily in 5,600 square feet of space on the sixth floor of the Paulsen Center, at 421 W. Riverside, in downtown Spokane. O’Quinn says the organization didn’t have to execute layoffs.

“The way our revenue works, we were already funded for the year,” she says. “Our challenge is going to be starting with our next fiscal year in July. I’m hoping we won’t have layoffs, but I won’t know until we close out the quarter on March 31.”

Today, the foundation manages approximately $145 million. During fiscal year 2020, which ended June, Innovia distributed a record $10 million in grants, topping the foundation’s previous high of $6.9 million the year before.

In a national survey conducted by the National Association of Charitable Gift Planners, organizations such as Innovia reported increased interest in nearly all categories of planned giving. Specifically, respondents reported seeing a 62% increase in charitable bequests.

“Most organizations (63%) have seen planned-giving donors increase gift amounts during the pandemic,” the report says.

“Despite the fact that the CARES Act waives required minimum distributions for IRAs and retirement plans in 2020, organizations have seen increased interest in qualified charitable distributions,” according to the report.

Here, however, the pandemic forced Innovia to delay a campaign that it was preparing to kickoff at the beginning of 2020.

Based on a previously commissioned study of the Inland Northwest in 2019, Locus Impact Investing placed the region’s current household net worth at $293.3 billion.

Locus, a Richmond, Va.-based nonprofit, estimates a wealth transfer of $41.6 billion will occur in the region during the next decade. The report projects $376 billion could change hands over the next 50 years.

A 5% capture over the next decade could generate $2.1 billion in charitable contributions to the Inland Northwest. Over a 20-year span, that amount could support average annual grantmaking of almost $115 million, McMurray says.

“It’s a simple and clear call to action,” McMurray says.

She says charitable giving across the region has deep roots, however, she is concerned about the community experiencing “giving fatigue.”

“In light of the pandemic, it will be interesting to see how long it lasts,” she says.