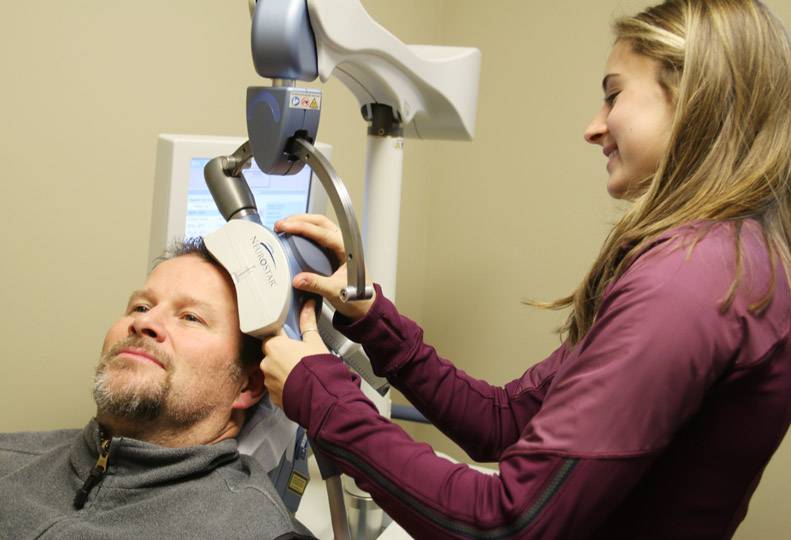 Operators of a startup company here that uses technology to treat depression plan to open more clinics in Spokane—and in other parts of the country where what’s known as transcranial magnetic stimulation is seldom used.

The young company, TMS Solutions, uses short, magnetic pulses to stimulate nerve cells in the area of the brain believed to control mood.

“It’s amazing technology that has a clinical success rate of 80 percent,” claims Christopher Blackburn, the CEO and co-founder of Colorado Neuro Health & Wellness LLC, which does business here as TMS Solutions.

TMS Solutions began operating here in October and moved in February to a medical office building owned by Orthopedic Specialty Institute LLC at 26 E. Fifth, on the periphery of downtown Spokane.

The transcranial magnetic stimulation procedure was approved by the U.S. Food and Drug Administration roughly a decade ago for patients who often suffer from major depressive disorder and who haven’t benefitted from prior antidepressant medication, Blackburn says.

During such a procedure, a certified technician uses a handheld, curved device containing magnetic coils to stimulate specific areas of a patient’s brain by resting the device on his or her head. During the procedure, a patient is reclined in a chair without sedation.

The full treatment of transcranial magnetic stimulation through TMS Solutions involves a 40-minute outpatient procedure five days a week for a total of six consecutive weeks, and the company now has eight active patients, enough to use fully a single chair, Denniston says. The company has a second chair on order to handle additional patient demand.

Blackburn and Denniston say they want to open two additional TMS clinics—one in North Spokane and the other in Spokane Valley—during the next 18 months.

Most medical insurers won’t cover the cost of transcranial magnetic stimulation until there have been multiple unsuccessful attempts to treat depression conventionally, such as with prescribed medications. The cost for the full treatment is $9,000, Denniston says.

TMS Solutions, now 4½ years old and still considered a startup, recently secured funding after Blackburn made a pitch to investors in the Spokane Angel Alliance. Blackburn says the alliance contributed $800,000 in investment capital.

Blackburn says the company will begin transitioning its corporate headquarters to Spokane from its current location in Grand Junction, Colo., with the desire to begin networking with staff and personnel at Washington State University’s Elson S. Floyd College of Medicine. He says he’d like to complete the transition later this year.

TMS Solutions currently has between 20 and 25 employees at its clinics here and in the Colorado cities of Denver, Fort Collins, Grand Junction, and in an area south of Denver known as Cherry Creek.

Of those, four employees are located here. Denniston says Blackburn is exploring potential growth markets in the Midwestern U.S.

“Neither of the (U.S.) coasts are strangers to this form of technology,” Denniston says. “So we’re looking at those areas in the middle of the country that might not be as familiar with it.”

TMS Solutions has partnered with Spokane-based neurologist Dr. David Greeley, who opened Northwest Neurological in 1999 and is located at nearby 610 S. Sherman.

Greeley’s online biography lists himself as the medical director of “the only program providing TMS in the Inland Northwest.” His bio says he’s been the principal investigator in more than 60 clinical research studies, primarily focusing on Alzheimer’s disease treatment and prevention.

Kendall Christy serves as the company’s certified technician at the Spokane TMS Solutions office while Greeley is the attending physician and oversees patients during the course of the treatment.

Anecdotally, Christy says the majority of patients have responded favorably to the treatment.

“I think it’s effective if you’re committed to it, because there is such a time commitment involved,” says Christy, who says she worked at another family practice clinic in Spokane before joining TMS Solutions.

“We saw a lot of patients with depression who were always switching medications; they either didn’t see any benefit, or, if there was benefit, then they experienced some negative side effect,” Christy says of her work at her prior clinic.

Using what looks like a handheld mechanical paddle, Christy softly rubs a treatment coil housed inside the paddle along the surface of the patient’s head in front of—and not directly over—the portion of the brain known as the motor strip, according to Denniston.

The motor strip, responsible for voluntary movement and muscle activation, is about an inch-wide area of the brain that runs from one ear to the other over the top of the head.

If Christy applies the device on the left side of the brain, when a pulse is sent from the treatment coil, she’s looking for a slight twitch in the right hand, Denniston says. It’s important not to apply the treatment coil directly on the motor strip in order to avoid the risk of seizure, he says.

With more than 2 million transcranial magnetic stimulation treatments performed in the U.S. to date, the frequency of seizures related to treatment is .001 percent, Denniston says.

In a story last November reported in U.S. News & World Report, the National Institute of Mental Health said that brain stimulation “can play a role in treating certain mental disorders.”

The NIMH added, “While these types of therapies are less frequently used than medication and psychotherapies, they hold promise for treating certain mental disorders that do not respond to other treatments.”