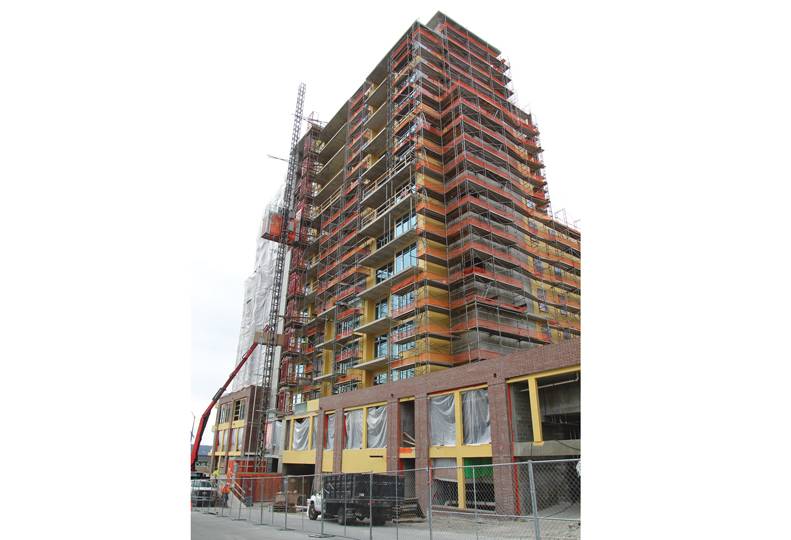 -Natasha Nellis
The 15-story One Lakeside building will have 40 condominiums and 29 rental units.

The 15-story, $20 million building is being constructed at the northwest corner of First Street and Lakeside Avenue, near the west edge of downtown Coeur d’Alene.

The contractor on the project is UPA Construction Group Inc., of Harriman, Utah.

Oz Architecture, of Denver, designed it.

Subcontractors based in North Idaho include Peck & Peck Excavating, of Post Falls; Metalcraft Mechanical LLC, of Hayden; and Etco Services, of Hayden Lake.

The project is being developed by One Lakeside LLC, which is led by Greg Hills, an Aspen, Colorado-based developer.

Hills says the project is scheduled to be completed in June, when interior work is expected to be wrapped up.

One Lakeside will have 40 luxury residential condominiums and 29 rental units.

Living space will range greatly in size,  from 750 square feet of space to 3,200 square feet.

The “club level” rooftop will have an outdoor pool and hot tub area along with a lounge and a fitness workout facility.

The building also has one 1,500-square-foot ground-floor retail space for lease.

Hills says 27 of the residential condos have been sold.

The rental units will be managed through Columbia Hospitality, of Seattle, which hasn’t begun reserving them yet, Hills adds.

Hills first proposed One Lakeside in 2012, and the development company first obtained building permits for the project two years after that.

The project was put on hold, however, until 2018, when the developer reapplied for building permits and began construction.

To make room for the project, a vacant, two-story apartment building, which was formerly known as the Mudge or Beutler building, was demolished.