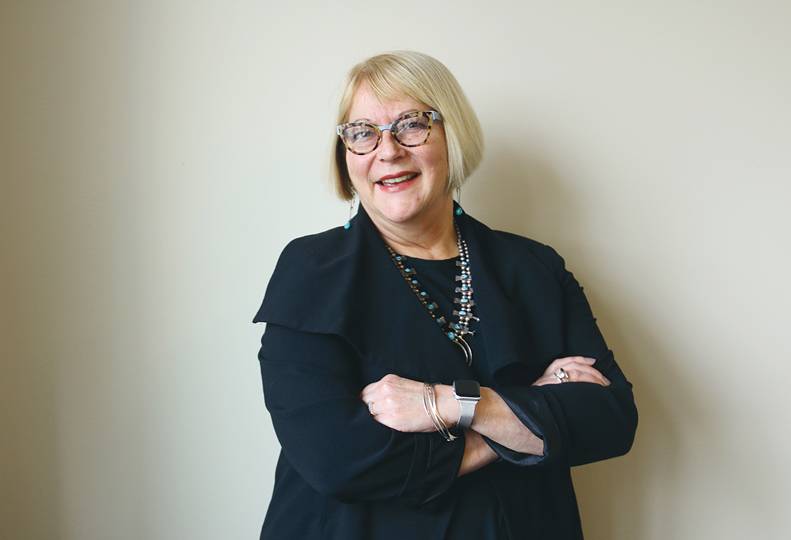 Peering out from behind her signature, fashionably bold glasses, Joyce Cameron is quick to laugh.

She’s just as quick to recall with quiet reverence the rare moments during which she met a recipient of a grant, witnessing first-hand the impact of her work.

Cameron has spent the most of her 34-year career working in fundraising and philanthropy in Spokane, most recently as chief philanthropy officer at Providence Health Care Foundation, a role she’s held for more than 14 years. She’s been in similar positions at the Northwest Museum of Arts & Culture, the American Red Cross, and Planned Parenthood.

Cameron is preparing to retire April 1. The Journal sat down with her to talk about her career, what she’s learned in her years in philanthropy, and what adventures she’s planning next.

Journal: What were some high points in your career?

Cameron: I think this is probably the best place to end my career. I am at the top of my game. I’m ending my career just at the peak.

When I started here back in 2006, it was myself and one other person. I was just raising money for one hospital — Sacred Heart. Fast-forward to 2012. I posed the same question that I had during one of my interviews to a bunch of hospital leaders: Why do you have three different foundations — Holy Family, Sacred Heart, and Children’s had separate foundations — raising money for the same organization?

There are three of us at three different foundations asking the same businesses and the same people for their money. That was my mission in life, to get this changed. In 2012, we brought the three foundations together, and then we brought together the INHS Foundation, then the two hospitals in Stevens County. I went from two staff people and raising money for one hospital to 15 staff people raising money for six hospitals. My team and I, over the last 13 years, have raised over $50 million for our hospitals.

What attracted you to the world of fundraising, and what do you enjoy about it?

Fundraising is really all about relationships. It’s finding the person who has a passion for something, connecting their passion to a project ... and making them happy about what they’re doing, as far as giving of themselves and their financial selves to make an organization better and to help more people.

I think the thing that excited me about it was opening the checks that come back when you send out a direct mail piece. All these envelopes come in, and opening them up and reading the things that people write ... “They saved my life.” … “Going to that exhibit changed my life.” … “Having that health care for my family member saved their life.”

You’ve been in foundation work for decades. What’s changed over the years?

There’s a part of it that hasn’t really changed at all — the part that’s about building relationships with people, finding out what they’re passionate about, and connecting it to something that they might be interested in funding.

But it’s all the other background things that have changed. We now have systems that can track donors and donations. I could pull a wealth engine on you right now, put your name in, and find out how much you make, how much you’re worth. We can go do prospect research. We can find people in our community who maybe aren’t donors of ours right now, and look to see if they might have that capacity. Now we’ve got more technology that enables us to find out who those donors are, how we can connect with them, and then keep track of what they give.

When I started in fundraising, we had index cards with donors’ names written on them, and every time they gave, we’d write down the date and how much they gave. That’s how we kept track of donors back then.

What’s the greatest challenge that you’ve faced in your career?

Making everybody else within the organization understand the importance of philanthropy being at the table when decisions are made. Especially for larger organizations. When I came here 14 years ago, I wasn’t given a goal. Now, we’re given really high goals, and it increases every year, because now philanthropy has done so well, and leaders within organizations know that getting the right people raising the money for your organization is going to be even more successful.

I don’t know if there’s anything I would do differently, because my path — from YWCA to Planned Parenthood to the Red Cross to the MAC and then to Providence — was a perfect transition. People go, “Wow, you’ve had such a diverse career,” but little do they know I was doing the same thing — public relations, marketing, and development — at all those places. I don’t know that I’d change any of it.

I have made mistakes, but I learned from them. If you can get past beating yourself up when you make mistakes and just learn from them and move on, I think you’re going to be a better person because of that.

What advice do you have for your successor, Colleen Fox?

We did a national search, and we chose her for lots of reasons. She’s fabulous, which is making my transition really easy. I walked into her office and took her some flowers on her first day, and put on the card, “You got this.”

As I tell her, when I brought these six foundations together in 2012, it was like birthing a baby. And we got through it. Now, we’re successful. I told her, “Now you need to take it to the next level and take it through the teenage years.”

She has 3 1/2-year-old twins and a busy husband, and she’s busy. I told her, “Just make sure that you’re taking care of yourself and your kids and your husband.”

She is a very smart woman, and she’s going to be a great leader. She’s doing a hell of a good job already, so I’m just going to sit back and enjoy.

I’m retiring because my partner is 17 years older than I am. He and I really want to travel. We want to do it while we’re both healthy.

I’m 61, so I’m a little young to be retiring … but it’s time. It’s time to just do something totally different. We’ve got five trips planned already. At the end of April, we’re going to go to New York to hit the museums and go see a Billy Joel concert at Madison Square Garden — that’s like two bucket list checks right there.

I retire about the time you have to start gardening. I love gardening and traveling, and I’ve got a 7-year-old granddaughter who is just the light of my life. She lives here in Spokane, so I’m looking forward to spending more time with her.