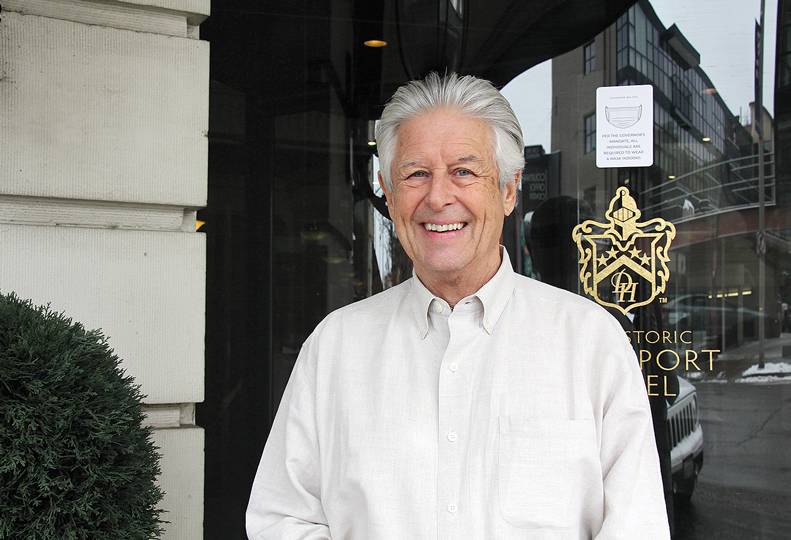 Ed Clark is a lifelong Spokane resident who has spent the last 50 years in advertising, a “mad man” as he says. At 75, he is finally taking a step back from his career and looking back on decades of memories creating thousands of advertisements for local and national brands like Washington Water Power Co.—which is now Avista Corp., Rosauers Supermarkets Inc., PepsiCo Inc. and 7 Up.

Clark was born in the northeast Spokane neighborhood of Hillyard and attended Eastern Washington University, where he received a bachelor’s degree in sociology. Working in advertising, he lived in Seattle for five years, and later in Portland, Oregon, for another two years before retuning permanently to his hometown.

He started his own small public relations, advertising, and marketing company, The Clark Co., in 1988. The company has had one associate for the last 30 years, Nancy DeStefano, who has now taken over operations. In March 2020, when the pandemic hit and everything closed, Clark decided it was a good time for him to slow down as well, though he wasn’t fully divested of the company until late last year.

The Journal recently caught up with him to talk about his lengthy career.

How did you decide to go into advertising?

My mom. I was a sociology major in college, and I really liked it. But I realized I didn’t know what to do, and I didn’t want to be a social worker. When I told my mom this she said “You ought to be a PR man. You’re always trying to get attention, maybe you can get paid for that.”

Public relations—I hadn’t thought of that. But then a magical thing happened. I was the night janitor at the AAA building downtown. One night, I emptied a trash can and on top landed a brochure from Thomas G. Hogan public relations. I went to him and ended up getting an internship with his firm.

It was January 1969. That’s when the ride began. I went from the garbage can to the very top of the business because this guy was the quintessential, connected, good, professional PR man in town. Legendary guy—died young but did so much.

What did you learn from him?

Since then, I’ve had the opportunity to produce tens of thousands of ads for hundreds of different clients and had the most amazing career I could have ever imagined. It’s exponentially more than I could have dreamed of. It was just unbelievable—50 years of being a mad man.

Does the show “Mad Men” reflect a lot of what you experienced?

Much of it is true. One of the truest parts of it is something that Roger Sterling said, something like “The minute you get a client in the advertising business, you’re in the process of losing them.” It’s a fickle business. I’ve had clients for 30 years, and others for a few months.

Of course, it was different, communication was different. It was more hands-on than it is today. When I had a press release, and I needed to get it down to the Spokesman-Review, I would type it up and personally take it to the city editor and hand it to him. Nowadays with the digital world, you get it in a snap.

You can get a picture of whatever you want online and put it on your ad for a spec or layout. We used to have commercial artists who used to draw those pictures. It was a lot of work. I keep wondering, how did we do all that? The digital world really impacted our business in a huge way as you can imagine, but it sure made it a lot easier.

What wisdom or advice would you give to someone starting out?

We’re trying to persuade, shape, mold, and motivate the human psyche to do what we want them to do. To me, the difference in marketing today is the media. When radio came in, it was a really big deal and changed things. Then television came and radio shrank. Now digital media is having an effect. The message is still the important thing. Getting into the mind of the prospect and giving them a reason to do business with you.

The interesting thing about advertising is people don’t know what it means. It comes from Latin, to advert, which means to turn toward. So when it was translated to English, the first newspapers read “Notice.” That’s what it’s about. Turn people toward your message, your product. As you know, we’ll do anything to get your attention.

My advice for anybody is to always be learning. And to connect, connect, connect all the time. You know how they say, “It’s not what you know, it’s who you know?” That’s not true. It’s who knows you.

I had the opportunity to do a three-minute radio and TV spot that aired Sunday mornings for several years called How’s Business. And that was a huge connection. It was a gift. Out of that grew a newsletter that I’ve been doing for 20 years. The best compliment I ever got about that newsletter was: “God I love your newsletter because it’s not about you.” You know, you have to be subtle, don’t be overbearing.

What do you plan to do now with your retirement?

I just turned 75, and nobody was more surprised than me. When I was 65, I had no idea about retiring. But the business changed, and I got to the point where I had to ask myself how long I wanted to keep going. The shutdown helped with all that. I’m still involved, but it’s very limited.

The pandemic has really impacted that too. So, it was kind of perfect because suddenly everything was shut down, and there was not much to do.

I have no plans to reinvent myself. I’ve done enough traveling, and I don’t want to go anywhere. I’m just enjoying life and enjoying a flood of memories. It’s great to watch the reruns.

What were some of your best memories?

There are so many highlights. Business in Japan, network TV ads, campaigns for stores in Chicago, Disney on Ice, Ringling Bros. and Barnum & Bailey Circus. Just amazing stuff. But some of the most heartfelt memories are the things that happened here—bond issues and levees.

I was fortunate to be involved in the bond issues that helped build grade schools in Spokane in the ’70s and the bond issue to build the Spokane Arena and the Convention Center. Those community campaigns were really satisfying, to drive by and say, “Yeah, I had a little part in that.” It was a thrill to do all that. When you take a step back, you say, “Wow, that was really something.” Boy, advertising was the right thing for me. It was fantastic.