Uptick in patient diversity is attributed to increase in educational outreach 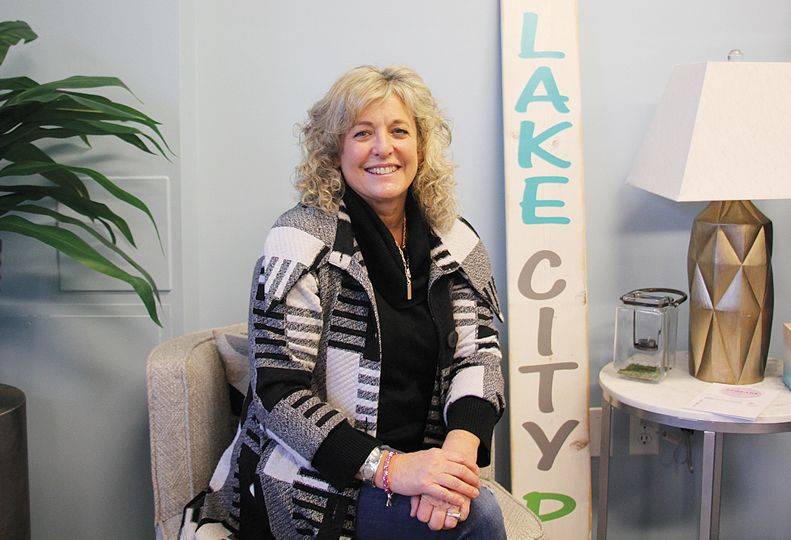 -Karina Elias
Sheree DiBiase, owner of Lake City Physical Therapy PA, says education on pelvic issues for both sexes has contributed to the increase in demand for treatment.

While pelvic health traditionally has been viewed as a women’s health issue, providers assert that pelvic health impacts men and children, too. In men, pelvic health dysfunction can manifest as incontinence and sexual issues. In children, it can be seen in issues like constipation and trouble toileting.

Providers attribute the growing patient numbers to an increase in educational outreach, access to online information, and an aging population.

Diana Smith, a physical therapist at Summit Rehabilitation Associates, located at 407 E. Second, oversees the pelvic and cancer rehabilitation program for men and women at Summit.

At Summit, therapists work with men following a prostate cancer diagnosis to reestablish urinary control if they’ve had surgery or radiation treatment. In addition, pelvic therapy is also used for patients following a gender confirmation surgery. Kegel exercises are sometimes recommended for men.

Other types of patients that seek pelvic therapy might be patients that have suffered trauma, whether it is physical or sexual in nature.

“Maybe patients have already had to cope with this trauma from a legal or counseling standpoint, but physically, there’s other things that manifest with how our body works,” she explains.

Smith describes the trunk of the human body as a canister. The roof is the diaphragm, and the walls are the abdomen, lower back, and hips, and the pelvic floor is the bottom of that canister, she says.

The pelvic floor sweeps from the pubic bone, which is the most forward-facing of the main pelvic bones, to the lower lobes of the main pelvis bones, known as the sit bones, in the back-facing part of the pelvis, and forms a diamond shape filled with muscle groups.

The internal structure is similar for men and women, she says, adding, “It’s just a difference of external genitalia.”

Smith explains that a system of nerves and muscle tissues interacts with the pelvic floor, affecting the bladder and urinary system, the colorectal gastrointestinal system, and the reproductive system.

“Men, children, and women have all three,” she says.

The urinary system for males and females encompasses not just urinary function, but reproductive function, she explains.

For men, “One of the earliest signs of early heart disease is actually erectile dysfunction,” she says.

Smith estimates that about 30% of male patients she sees who aren’t referred by their health team, are frustrated and desperate with their conditions and dive into research themselves. Additionally, she says she feels that social media, websites, and growing willingness to talk about health concerns in the community has created greater awareness.

Summit has three other clinics throughout Spokane. During the pandemic, Summit stayed open and busy, especially providing cancer-related care, she says. However, Smith say she believes the Spokane area has a shortage of pelvic health providers.

Physical therapist Sheree DiBiase has been specializing in pelvic health for nearly 30 years and is the owner of Lake City Physical Therapy PA, which has six clinics in the Spokane-Coeur d’Alene area. Her newest location opened earlier this year on the South Hill, at 3009 S. Grand Blvd., and a seventh clinic is planned to open in Liberty Lake by year-end.

Lake City Physical Therapy offices are designed with a boutique-like quality of pastel to bright colors, flowers, and comfortable couches so that patients feel safe and calm, says DiBiase.

She attributes the growing interest in pelvic health to women’s education.

“Women make 80% to 90% of all health care decisions for family systems,” DiBiase says. “Teaching people about wellness is about pulling women in, because then they pull in their children and husbands.”

Pelvic health often can seem like an obscure field because it remains visibly hidden, says DiBiase.

“If your elbow or thumb or ankle is not turning correctly, it’s something you can point at and know that it’s not right.” she says, adding, “If nobody talks about (pelvic health), how can you know that pelvic physical therapy can alleviate constipation, incontinence, or the inability to have an orgasm?”

DiBiase says she is looking to hire five providers to keep up with the growing demand for pelvic health therapy. Like Smith, she sees a short supply of therapist specializing in pelvic health, and physical therapists in general across the country.

“We have a huge baby boomer group of people,” she says. “We can’t keep up to what our population base is (with) the number of physical therapists coming out of school.”

Washington is an all-access state for patients seeking physical therapy, says DiBiase. That means anybody who wants to see a physical therapist is allowed to walk into any office and make an appointment without needing a referral from their primary health provider.

However, she contends, not all insurance companies adhere to this access rule, and some still require authorizations from a patient’s primary-care physician.

DiBiase says she encourages patients to come in instead of waiting three months for an authorization, and she has her staff help with the paperwork and authorizations needed at the time of a patient’s visit.

Julia Salazar opened her practice Core Pelvic Physical Therapy, located in the Spokane Valley, in 2019. She employs three therapists including herself and says she is booked until February. She’s currently expanding her 1,500-square-foot clinic to 2,500 square feet and hiring an additional provider to help keep up with demand.

Since opening her practice, Salazar has made education an integral part of her marketing. Before the pandemic, Salazar led monthly workshops with different organizations. She spoke to Spokane-area prostate cancer support groups to share information on what to look for, what to expect, and when to see a doctor. She’s also spoken to Spokane Urology, and Eastern Washington University’s athletic trainers to inform them of common pelvic injuries in athletes.

“Men will come into my clinic and say things like, ‘I don’t even know why I’m here, my doctor sent me. I don’t even have a pelvic floor,’ and I say, ‘Actually, you do.’”

Two years ago, at the Spokane Health and Fitness Expo, she delivered a talk for women about leaking during exercise and was surprised by the number of young men in their mid-20s who made their way to her booth.

“They would say, ‘I’m having pain. I can no longer do squats because I’ll have horrible testicular pain. Can you help me with that?’” she says.

Salazar says such pain often is attributable to a tight pelvic floor, “They are upregulated and tight. When they go into that deep squat, they are stretching those muscles and compressing those nerves.”

For some children with pelvic health issues, Salazar contends bed-wetting and trouble with potty training frequently stems from constipation, but parents often are told by their pediatrician that the child eventually will outgrow it.

“It’s usually moms taking their own initiative and doing the research because they were simply given some medication or told to wait it out,” Salazar says.

Looking ahead, Salazar says she hopes to get involved with the public school system to include pelvic health in sexual education classes. She says education remains her priority in getting the word out about the importance of pelvic health.

“I talked to a lot of the pelvic floor therapists who are trying to get the word out,” she says. “There’s so much work to go around, we’re not threatened or see each other as competition.”