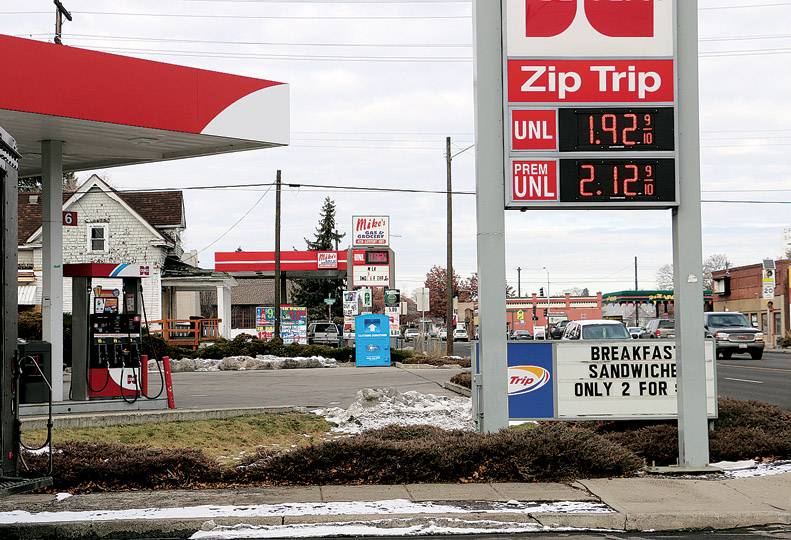 -—Katie Ross
While fuel prices here have continued to decline, some analysts are predicting rates will stabilize in the near future.

As the price of gasoline continues to fall in Spokane and throughout the U.S., consumers here are finding that they have more money to spend on other household needs, and businesses are seeing benefits as well. Some observers suggest, however, that the welcome economic impact of that price decline might not be as great as it would have been in the past.

As of Monday, Jan. 12, the price in Spokane for regular unleaded gas averaged $2 per gallon, 12.6 cents per gallon lower than a week earlier, according to fuel price tracker website GasBuddy.com. The website says it surveys 187 Spokane gas outlets daily.

The average price for gas in Spokane on Jan. 11 was approximately $1.10 lower than it was on the same day a year ago, GasBuddy says.

According to the U.S. Energy Information Administration, diesel prices have been higher than gasoline prices almost continuously since 2004. Prior to that, gasoline was almost always more expensive. The higher diesel prices now are due to increased demand globally and less refining capacity compared with gasoline, as well as a higher demand in the U.S. in particular for less-polluting fuels. Also, in the U.S., the federal excise tax for on-highway diesel fuel is about 24.4 cents a gallon, which is 6 cents higher than the gasoline tax.

“For them, it’s going to be a considerable break and give them some alleviation on their household budget, especially those low- to middle-income workers who are driving back and forth to work every day,” he says. “In terms of the consumer, that’s the group most likely to benefit.”

Another segment that should see a large benefit from the lowered prices is those who live in rural areas, Forsyth says.

“Rural areas tend to have few public transportation options, so there are no good ways to substitute away from driving when gas prices are high,” he says. “In addition, fuel costs tend to be a significant part of farming costs, so lower fuel will also benefit those rural families dependent on farm income.”

Beyond the agricultural sector, any companies that are involved in transport, Forsyth says, should also see reduced expenses.

“For anywhere that fuel is a big operating cost, it’s definitely going to be a big benefit for them,” he says. “And don’t forget airlines; fuel is a big cost for them. This is a pretty big deal for airline companies.”

However, Forsyth says the recent drop in gas prices may not be quite as beneficial to businesses as it would’ve been 20 or 30 years ago.

“We already went through high prices,” he says. “Companies have gotten more efficient, so over time, that’s insulated them from declines and rises in price. In general, companies have been working toward better energy efficiency for a while.”

For example, some companies are using more fuel-efficient vehicles or have moved towards alternative fuels such as natural gas, Forsyth says.

“Those kinds of options weren’t available 20 or 30 years ago,” he says.

“We’ve seen some of our freight pick up a bit,” he says.

However, the lower price doesn’t affect Trans-System itself as much because it charges its customers a fuel surcharge, which balances out price fluctuations, Proctor says.

Proctor says he thinks carriers in general could be affected if prices go up, especially smaller carrier companies.

“I think it has a bigger impact on the micro-carriers,” he says. “What tends to happen is, if you see a rapid spike in fuel prices, some of the micro-carriers will leave the market, either temporarily or permanently, causing an increase in demand for the rest of the trucks out there.”

“What the tea leaves, if you will, are telling me is we are probably going to expect to see prices maintain for the short term,” he says.

Forsyth says that, looking toward what prices might be like for 2015, he tends to monitor what the futures market is reporting. Based on indicators from that market, the average price for regular unleaded gasoline could be between $2.20 and $2.30 a gallon this year, he says.

While some observers might feel that the drop in prices occurred rather suddenly, Forsyth says it’s been brewing for a while.

“I think it took the markets a while to pull all the information as far as supply and what the demand was globally, and then they realized it’s a mismatch,” he says.

The discrepancy in supply and demand mainly is the result of an increase in supply from the U.S, Forsyth says, and a drop in demand internationally.

Also, there’s been some tension between Saudi Arabia, a low-cost, high-producing oil country, and the Organization of Petroleum Exporting Countries (OPEC), which also is contributing to the surplus, he says.

“It turns out a lot of members of OPEC have been cheating, pushing supply,” he says. “Saudi Arabia has been like, ‘If you’re not cooperating, we’re going to produce even if there’s no demand.’ They’re willing to wait this out and maybe even increase production until the other OPEC members start cooperating again.”

The public transportation sector also could see benefits from lower fuel prices. Steve Blaska, director of operations for Spokane Transit Authority, says, however, that STA needs to take a long-term view in terms of commodity costs such as fuel.

Blaska says that, as of Dec. 15, STA was paying about $2.46 for diesel and $2.39 for gasoline. All of the agency’s fixed-route buses use diesel; only a few of its paratransit buses use gasoline.

Reflecting on the recent trend in gas prices, he says, “Of course, we welcome the fact that they’re going down, but relatively speaking … prices right not today are still about 34 percent higher than what (STA) paid in 2007, based on our average price in 2007 for diesel.”

Jennifer Cook, a Bellevue, Wash.-based spokeswoman for AAA Washington, says in a typical year, fuel prices start to increase around February, because that’s when refineries reduce their production and do maintenance work.

“They also switch from winter fuel blends to summer fuel blends, and summer is more expensive to produce,” Cook says. “Usually we see prices go up right before summertime … but every year, something happens to disrupt this trend, such as refinery fires or something that causes a lot of fuel to be pulled somewhere, or if there’s a major disruption in a major crude-producing country.”

Another factor contributing to the current low fuel prices is that this isn’t a high-travel time of year, Cook says, but she adds, “If crude stays low, prices will stay low, unless something disrupts.”

She says the average price in Spokane is about $1.07 less than a year ago.

“We’ll probably see prices level out; I don’t know how low they’ll go,” she says. “Prior to 9/11, I could almost tell you what was going to happen day-by-day, but after 9/11, things have been very different year to year.”

Cook says AAA also noted an increase in travel and consumer spending over the holidays, probably due to the lower gas prices.

“My guess is part of it is spending less on gasoline; people have more money in their pockets,” she says.

Bryn West, general manager of River Park Square, says the mall did see a rise in spending over the holidays. However, it’s difficult to attribute that to a single factor, she says.

“Whether that’s due to the economy or more directly linked to gas prices, it’s tough to say,” she says.

The mall has seen a definite uptick in out-of-state cars in its parking garage last year, West says, which she does attribute directly to the gas prices.