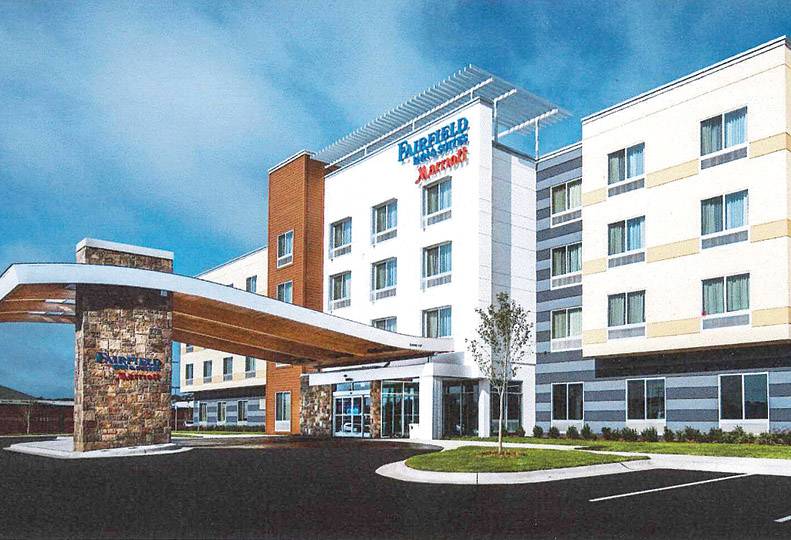 -—Miller Stauffer Architects PA
A Fairfield Inn & Suites hotel, illustrated here, is proposed in Coeur d’Alene at the site of the Garden Motel, at 1808 Northwest Boulevard. Two other buildings also are planned at that site.

Coeur d’Alene businessman Ron Ayers says the hotel he’s planning would be the engine that drives an economic development campus, in addition to increasing lodging capacity near downtown Coeur d’Alene.

Ayers proposes to develop a $10 million, 112-room Fairfield Inn & Suites by Marriott hotel as part of a larger $20 million, entrepreneurial-focused economic development complex at 1808 Northwest Boulevard, across from the Riverstone urban village.

The four-story Fairfield Inn would be built at the current site of the aging Garden Motel, which would be razed to make room for the project.

The complex would include Coeurwork, a 16,000-square-foot, three-story co-working building, and Incoeurbator, an 18,000-square-foot business incubator facility.

Coeurwork would feature co-working space in which entrepreneurs rent work space as needed with access to shared amenities, such as high-speed Internet, conference rooms, and common spaces.

The Incoeurbator building would provide space for business startups. It also would introduce a concept called “makerspace” to Coeur d’Alene, Ayers says.

“Makerspace is a place where everyone from kids to adults can go and learn about creating objects,” he says. It could include access to software systems, 3-D printers, computer-controlled manufacturing equipment, milling machines, and other tools.

“It could have computers and classes for learning about inventing and making things with the idea that companies and jobs will be created,” Ayers says.

Ayers also envisions a 1-acre pad site facing Northwest Boulevard, which he hopes to sell for use as a restaurant or a bank, if not both.

Ayers says the hotel construction likely would begin first, although the Coeurllaborate building might be erected simultaneously.

Vandervert Construction Inc., of Spokane, likely will be the contractor for the development, Ayers says, and Miller Stauffer Architects PA, of Coeur d’Alene, is designing it.

He asserts the energy-efficient hotel will have solar-energy features and will be certified through the Leadership in Energy & Environmental Design rating system for sustainable development.

Ayers hopes to begin construction this summer for a possible hotel opening in the spring of 2017.

The Coeur d’Alene City Council recently approved a zone-change request to allow commercial development at the site, and Ayers has submitted a project plan, which is under design review in the city’s planning department.

“It’s moving very quickly with the convergence of many things speeding us along and feeding the project as we go,” he says.

“There’s no question that during the summer months, Coeur d’Alene is an incredibly popular destination,” says Wilson, former general manager of the Coeur d’Alene Resort and the Best Western Plus Coeur d’Alene Inn.

The off-season, however, can be a struggle for some lodging facilities, although exceptions to that include the Coeur d’Alene Resort downtown, with its ability to attract smaller conventions, and Triple Play Resort Hotel & Suites, in Hayden, which has an amusement park with an indoor water park.

“Triple Play has done remarkably well in becoming a winter destination,” Wilson says. “It’s even raised the occupancy bar for other surrounding hotels.”

He says the Garden Motel location likely would be a good site for a modern hotel because of its proximity to downtown Coeur d’Alene and to Riverstone.

He adds, “My guess is that because of its location, they also are banking on the overflow connection from the downtown core. If you want to be close to the water, where do you go?”

Wilson says there’s a strong movement within the hotel industry to develop limited-service hotels that don’t include full restaurants.

“It’s very unusual in markets of our size to have too many full-service hotels. Most new brands have limited service, with breakfast included,” he says. “They’re not in the food-and-beverage business, but they try to be near restaurants.”

Wilson points out that nearby Riverstone has several restaurants from which guests of the planned hotel would be able to choose, including the soon-to-open Anthony’s seafood restaurant. Less than a mile north a of the Fairfield site, a long-anticipated travelers’ favorite, a Cracker Barrel Old Country Store restaurant and gift shop, is under construction, he says.

With such an addition, the resort could accommodate a 500-room, 800-person convention in a self-contained venue, Wilson says.

“That’s a niche they currently have to say ‘no’ to,” he says.

Wilson expects Hagadone Hospitality eventually will approach the city with another expansion proposal.

“I would be surprised if we don’t see something within the next couple of years, although I have no information right now that they’re going to do that,” he says. “The demand side appears to be there still. It’s a matter of whether you can build it in downtown Coeur d’Alene.”

The most recently developed Coeur d’Alene hotel is the SpringHill Suites, another Marriott-brand facility, which opened in 2013 at 2250 W. Seltice Way. The $12 million, 120-suite facility is located about a half-mile northwest of the planned Fairfield Inn.

“Every big hotel chain out there has competing brands,” Wilson says. “SpringHill Suites is a trendy brand that has more of an urban young feel and is little pricier compared with Fairfield Inn, which is associated with value pricing and the family market.”

Katherine Hoyer, manager of the Coeur d’Alene chamber’s Convention & Visitor Bureau, says hotels have been doing well in the last few years, especially during the peak season of June through September.

“Last summer was the strongest,” she says.

Hoyer says she expects to see a similar increase in 2016.

The Coeur d’Alene area has about 2,500 lodging rooms, she says.

“It’s one of the bright spots in the national economy,” he says. “Locally, I see no difference. I believe our hotel will outperform the market. The public will realize they are supporting an economic development ecosystem just by staying at our hotel.”

Ayers, 55, has a background in hotel franchise development. He bought the Sleep Inn & Suites at 157 S. Pleasant View Road in Post Falls in 2002, and bought the Garden Motel the following year with the intent to develop a hotel there.

“Forward looking, I felt it was a great site,” he says. “Then we had a boom-and-bust cycle.”

Ayers also had owned the Cedar Motel & RV Resort, at 319 Coeur d’Alene Lake Drive, for about five years before selling it recently to Hagadone Hospitality.