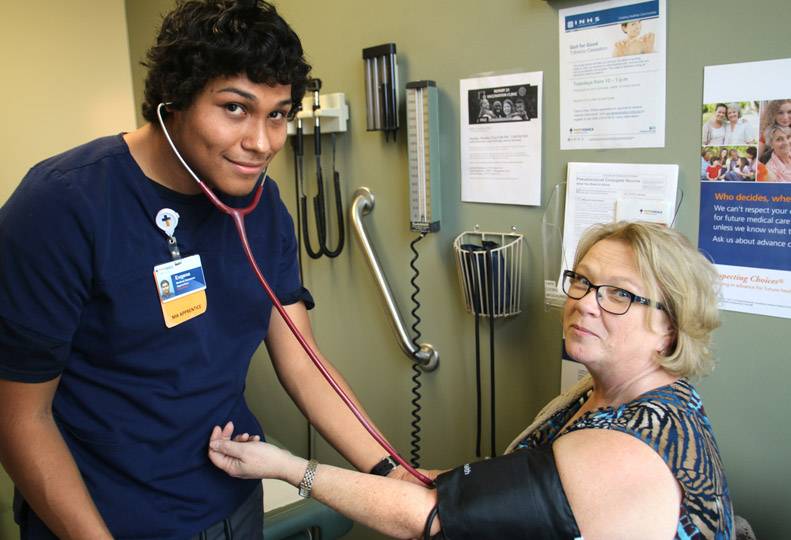 Like a Major League Baseball franchise, the Spokane-based Providence Medical Group within the last year has developed its own farm system of sorts in an effort to meet the increasing need for medical assistants at the organization’s regional hospitals and clinics.

The inaugural Providence Health Care Medical Assistant Apprentice Program currently has a total of eight students here, most of whom are recent high school graduates who had taken medical assistant classes at Spokane Valley Tech and Spokane’s NEWTECH Skill Center.

Apprentices must be at least 18 years old with a high school diploma. Val Higginbotham, senior director of Providence’s pediatric division, says future apprenticeship classes also will be available to qualified Providence employees who aren’t working in health care-related jobs but have a desire to join the medical field.

“Medical assistants are valuable in the clinical setting,” says Higginbotham, whose medical career began as a medical assistant. “They’re critical to daily operations, and the fact is there’s just a real shortage of them.”

“They’re more-often-than-not the most frequent point of care for patients,” she says of medical assistants.

Locally, medical assistant training programs at both Spokane Community College and Spokane Valley-based Carrington College have produced the largest number of medical assistants for the Spokane area. However, both colleges combined are unable to meet the high demand for medical assistants that now exists here, Higginbotham says.

Across the Inland Northwest, the Providence Medical Group today has more than 50 medical clinics with more than 600 providers in the Spokane, Colville, Chewelah, and Lewiston areas, says Bryan Fix, the interim director of Providence Health Care.

Through growth and acquisitions, Providence has seen its number of medical assistants increase from just under 40 in 2010 to more than 300 this year, according to statistics provided by Fix.

As a result of this growth and other market forces, Providence last year began planning to grow organically its own medical assistant training program, and the group created the apprentice program.

That fact has led to a bidding war in recent years among local health care clinics and facilities for talented medical assistants, which traditionally had been a low-paying job.

“Retaining top talent at that position has been a challenge,” he says.

Higginbotham says most new medical assistants have student-loan debt and start work at or just above minimum wage.

“That was my situation when I started as an MA,” she says. “So when another clinic offers a $1 or $2 more per hour, an MA isn’t going to hesitate to take that offer. It’s created a huge turnover rate.”

So, Providence has partnered with the Washington Association of Community & Migrant Health Centers in the creation of its 12-month apprenticeship program that prepares students to take the certified clinical medical assistant test through the National Healthcareer Association, Higginbotham says.

The program has been approved by the state of Washington as an equivalent to a certified medial assistant program at a community or technical college, she says.

Apprentices are required to complete 2,000 hours of paid, on-the-job training with the support and guidance of an experienced one-on-one medical assistant coach and 364 hours of supplemental online coursework, she says.

Apprentices must complete an application process and be accepted into Providence’s apprentice program. If approved, apprentices receive a $6,000 forgivable Providence education loan to cover the cost of the apprenticeship. Apprentices start at minimum wage with full benefits and can quickly earn increases depending on performance, say the program’s organizers.

If an apprentice chooses to leave employment from Providence at the completion of their training they will be asked to repay their education loan, Fix says.

Says Higginbotham, “This is an ideal way to relieve the financial burden on MAs at the end of their training because typically they have to complete a four- to six-week, unpaid clinical externship once they earn their certification.”

Long term, Providence wants to see its apprentices advance beyond the position of medical assistant and follow a career track resembling the one Higginbotham pursued.

“If they want to grow, certainly other opportunities will follow,” she says.

“My job is to make sure they’re where they need to be in their academics,” says Harvey, who already calls the apprenticeship program a success.

Harvey says the next student cohort will be a dozen students—most of whom are currently Providence employees.

Eugene Florez, a 19-year-old apprentice currently in the program, says he previously was studying sports medicine when he first heard of Providence’s apprenticeship program and decided to apply.

“I love it,” Florez says of the program. “I wanted to do something where I could help people. This whole program is amazing, and I’m being paid to learn.”

Coincidentally, Higginbotham says Florez took her vital signs recently when she visited a Providence clinic due to illness.