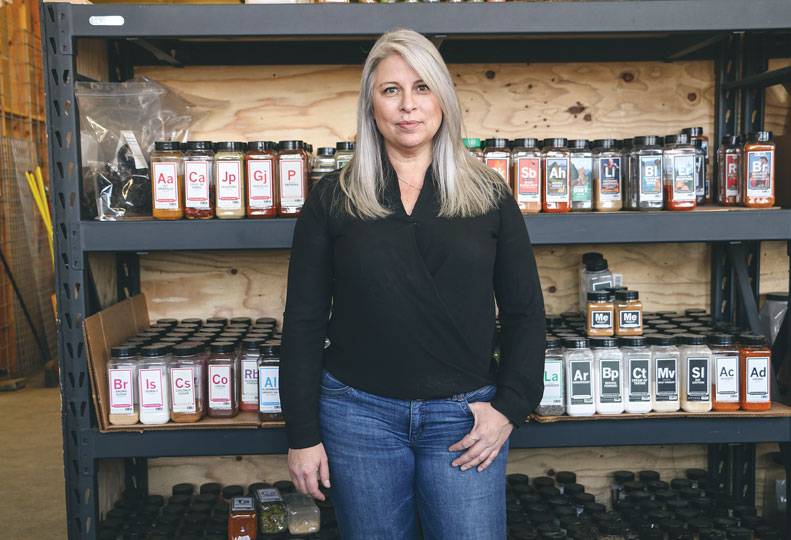 Heather Scholten has been with Spokane-based spice and rub mix startup Spiceology Inc. from the beginning.

She almost didn’t take the job.

In 2012, she was spending her days testing recipes and posting to her food blog, Farmgirl Gourmet.

“One day, I randomly got an email from Pete Taylor saying that he was looking for somebody like to me join him in launching this spice company,” says Scholten of Spiceology Inc.’s beginnings. She hesitated in joining Taylor, she says. “But I had this epiphany one day that if I didn’t go with Pete, I was just going to regret it.”

Eight years later, Scholten and Taylor’s spice company now has annual revenue of about $10 million and more than 35 employees.

Scholten has been chief information officer at Spiceology for about a year—she was previously the chief operating officer—but Scholten says she’s now transitioning into a more creative role at the company.

The Journal spoke with Scholten to learn about her next step within the company, how Spiceology weathered the worst of the pandemic, and what’s next for Spiceology.

How did you get into the food industry?

I’ve always been someone people would contact about recipes. I was working as a real estate agent, and I wasn’t really enjoying it. My husband at the time said, hang up your real estate hat, take the winter off, and figure out what you want to do. That was in 2010.

I’d had the blog for a while and not really put a lot of love into it. I dove head-first into it. I was really enjoying it and I wanted to see if I could make money doing it. I quickly got on board with Emeril Lagasse. I was one of the bloggers who would do book reviews for him. Then it mushroomed into a lot of other collaborations with large companies like Sabra, Dole, and KitchenAid.

I truly enjoyed it. I love coming up with recipes. One of the most popular recipes on my blog is homemade Hamburger Helper. It was a joke, because my ex-husband had been raised on the boxed stuff, and I was like, there’s no way you’ll ever get me to buy a box of that at the grocery store, so I’m going to figure out how to make it from scratch. That’s what I did. It was fun. It was kind of like what we do at Spiceology, with innovative blends.

How have sales at Spiceology been during the pandemic?

On March 16 of last year, everything was coming to a screeching halt. Our main focus was on food service. We were selling to restaurants and hospitals and sports facilities. Everything kind of stopped. We were like, what the heck are we going to do? That day was a pretty tough day, wondering if we’re even going to have a spice business after this, or are we going to be able to weather the storm?

That was when we shifted focus. If food services are going to turn off, then we need to go to people who are all stuck at home, and figure out how to entice them to buy Spiceology products to be able to enjoy cooking again. That’s what we did. Since then, we far exceeded what we thought we were going to do. It’s going wonderfully again this year. Every month, I’m pinching myself. People love the brand, they love the spices, and everybody’s cooking at home.

What’s next in your vision for Spiceology?

When you look at us as a company, we’re a small size in the big landscape of spice companies. It’s about expansion and getting more people to know who we are. We used to be in groceries. We pulled out of that because we didn’t do it right at the beginning. Now, it’s time. We’ve got the momentum behind the brand, and now it’s time to look at that again.

I’ve been our CIO for quite some time. I have decided that I want to go back to my roots and get back in the kitchen to develop recipes and help with our content, boosting our website, our social media channels, and advertising. That’s going to be a really fun experience for me.

I’ve been doing this for eight years. Anybody who’s ever started a business from nothing knows you’re burning the candle at both ends with a flamethrower in the middle. Every day is go-time. Twelve or 15-hour days are normal. Not that I’m trying to say I want to be stuck in the corner or put out to pasture -- I still definitely want to have a large impact on the company, but in a role that’s not quite as taxing on me.

Spiceology is a brand, and we regurgitate a lot of other people’s web content because we just don’t have anybody in-house who can keep up. This is our chance to show people things that are made with our stuff, that are beautiful, that show how attainable our spices are, instead of someone else’s recipe that may or may not even have had our spices in it.

The other day, I made green beans in the air fryer with togarashi spice and just a tiny bit of olive oil, and it was amazing. It’s such a quick little thing, but take a photo of it, and now we’ve got content that we can put out there and say, you guys should try this.

We just hired my replacement. Probably in the next four weeks, he’ll be a little more on his own and I can go off and start focusing on making tasty recipes. I used to do it for the brand early on. A lot of the older recipes on our blog and whatnot were from me. I really enjoyed it.

One of the recipes I came up with in the earliest days was adding our raspberry chipotle to brownie mix. You think, raspberry chipotle? I’m putting this on ribs or chicken or steak, and you’re telling me I can put it into brownies? But it’s epic. Doing that kind of thing, showing the versatility of the blends that we have -- not everything is for throwing it on a piece of meat and grilling it -- is the fun thing for me. It’s almost like I’m a scientist.

What attributes or skills would you say helped you most in getting you to where you are now?

I think if you asked anybody at Spiceology, they would probably tell you that I’m the jackie-of-all-trades. When Pete asked me to join him, he really needed somebody who could do web development, who had photography skills, who could do marketing, recipe development, graphic design. Those are all the skills you have to have as a food blogger and when you’re running your own business. Those are the skills I bring to the table, plus I have an information technology background.

That’s how I landed in the CIO role. When you’re an entrepreneur starting out, you don’t have money, so you have to go and figure out how to do it on your own, and that’s what Pete and I did -- we rolled up our sleeves and did whatever we had to do to make it happen.

What drives you on a day-to-day basis?

We’ve got this little rocket ship. Every day is something new, and it’s exciting. That’s the thing that keeps everybody going -- what cool thing is going to happen today? This business has been a whirlwind of excitement and so many cool things. I get up in the morning and want to see what’s going to be next.

It’s peanut butter cups. I get the dark chocolate ones at Trader Joes. I keep them in the fridge, and I allow myself to have two of them at night. Otherwise, I’ll eat the whole thing.