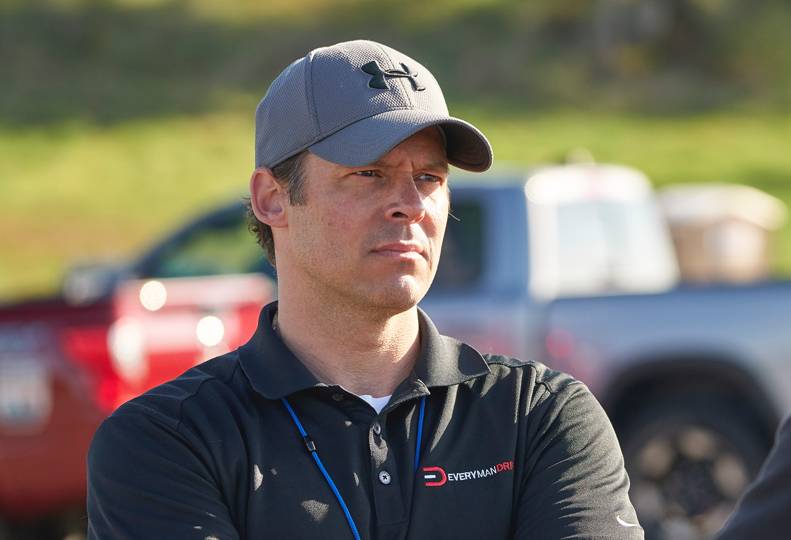 Dave Erickson was in broadcast journalism for 15 years, during which time he spent more than four years at Spokane’s KXLY Broadcast Group. Erickson is still in front of the camera, but he’s no longer reporting from a studio desk.

Erickson now works full-time as owner and managing editor of the Everyman Driver channel on YouTube, where he reviews vehicles, provides information on maintenance, and posts videos that are more entertainment-oriented, such as “Man Duct Taped to Mustang at 90 mph.”

The Journal spoke with Erickson about the switch from TV to YouTube, how the Everyman Driver channel works behind the scenes, and how YouTube can benefit business owners.

Journal: How did the Everyman Driver channel start?

Erickson: I was freelancing for somebody else, and I asked if I could be a bigger part of their channel. They refused, so I started my own channel. I needed to make more money than what I was making.

In a way, it was a glorified internship, barely getting gas money in return for the time I was putting in. It wasn’t about the money, it was about the experience, and after I got the experience, I thought I’d proved myself. They weren’t interested in bringing me on as a member of the team, so I started my own channel.

In August of 2012, I officially created my channel and started making videos for that channel soon after. Almost 90 million viewers later, it turned out to be a good decision.

When did the channel start getting popular?

I was averaging about 25,000 subscribers a year for the first three to five years. That was pretty consistent. The revenue kicked in last year. I had five or six years of flat revenue, and then last year, something hit. I don’t know whether it was a tipping point, whether it was just finally some brand recognition, experience. Whatever it was, it took off with some very popular videos for my channel, and then the revenue more than doubled last year from the previous year. In fact, I made more last year in my single YouTube channel than I did my last year as a TV news anchor.

I’m not sure we’re supposed to. It’s one of those rules that when you sign up for the YouTube Partner Program; you’re not supposed to say how much you make. It wasn’t six figures, but it was close.

What do you think has made the channel successful?

I hope it’s the everyman quality, being relatable and presenting in an easy-to-understand way. It’s hard to say that I’m not highly produced, because my production value and quality is much higher than those without my background from doing TV news, reporting, and one-man studio shooting and editing. I have a wider base of information and skillset than most people who start. I understand production value, framing, audio, storytelling, sequence, on-camera presentation, and bookending it for the end consumer.

How do you get vehicles to review?

I’m a member of the NWAPA—Northwest Automotive Press Association. I’ve been a member of this press association since probably 2013 or so. A manufacturer will distribute press vehicles, a dozen or so in a certain market, like Seattle. That’s where I get my vehicles. There is a middleman, a fleet services company, that has all the cars, and they distribute them to journalists around the area that are approved by a manufacturer. The PR people for those manufacturers have to approve who gets vehicles, and I’m on that approval list. I get a vehicle once a week, for the full week. It’s all taken care of in terms of gas, insurance, and so on. I’m driving it throughout the week, assessing it, and then on one day, I’ll shoot my presentation and do my car review shoot, and then I’ll edit it.

When I was in TV, it was over a 15-year span, from 1996 until 2011. My first TV job happened to be in the Tri-Cities, at the NBC affiliate. I went to Washington State University, and then I had an internship in Portland at a TV station there. That’s when I discovered that I love the storytelling element of TV news.

After I left TV news, I decided to do video production as a one-man band. I formed my own Dave Erickson media production company, where I would help small businesses or individuals share their message. I’d do interviews with them or just have them on camera and help coach them on getting their message across.

It was during this transition time that I got a job. It’s a weird segue. I’ve always been an athletic guy, and I got into triathlons real seriously after I moved here to Spokane, although I’d been doing them for years prior. Because of a few public relations connections and me being in the media, I met the right people, and eventually I left TV news, because I was done with TV. I wanted to pursue a life as a triathlon reporter.

I started working for the World Triathlon Corp. as an on-site reporter. It was during that time that I met the guy who was doing the automotive videos. We both had a background in triathlons. I said, “Hey, is there anything I can do for you?” That partnership formed. I was already doing some triathlon fitness videos on a YouTube channel, so I knew a little bit about YouTube, but I wasn’t monetizing it. I wasn’t using it for money. The automotive part presented itself as a way to make a living.

Has anything about the experience of running a YouTube channel surprised you?

How challenging it is. The immense amount of patience you have to have to be successful. Some people will start and give up because they’re not patient. I think that’s the thing that was tough for me for the first five years.

The YouTube algorithm has a big part of it, whether it’s watch time, which is a big factor in whether or not a video gets promoted, or how many videos you have out there, so the likelihood of the video coming up. It’s a game of discipline, patience, persistence, putting your head down and just doing the work. It’s a hobby unless it can pay the bills. It was a hobby for the first four or five years, and then it started to become a real income generator.

What’s the best part about running the Everyman Driver channel?

The freedom to do it however I want. You can’t be wrong, as opposed to you can be wrong if you report the wrong stuff on the news. Having an opinion has value. And being able to have fun with the video process, which I always loved when it came to storytelling.

I don’t have to get the right sound bite or ask the right questions. It’s about how I can get the cool shot, how I can showcase this car or demonstrate in a way that’s more entertaining and more helpful to who’s watching. I can smile on camera, make fun of myself, and mess up. Be human.

What advice do you have for business owners who want to get into YouTube to enhance their business?

Share what you know. They say the expert is someone who knows a little more than you do. Every one of these business owners knows their business better than the consumer does, most likely. Just start creating content. If your business gets a number of questions on a regular basis that are the same, create a video and answer those questions once. You can put up a page that’s an FAQ video page. If you are a coffee shop, show how you make your coffees. If you are a salon, show how you cut hair. Give me a reason to come visit you. Tell me what you know.

This is where patience comes up again. There is no overnight success in YouTube. It’s a long game. Do and keep doing without worry of judgement. You’ll have people who judge you, and that’s not your audience.