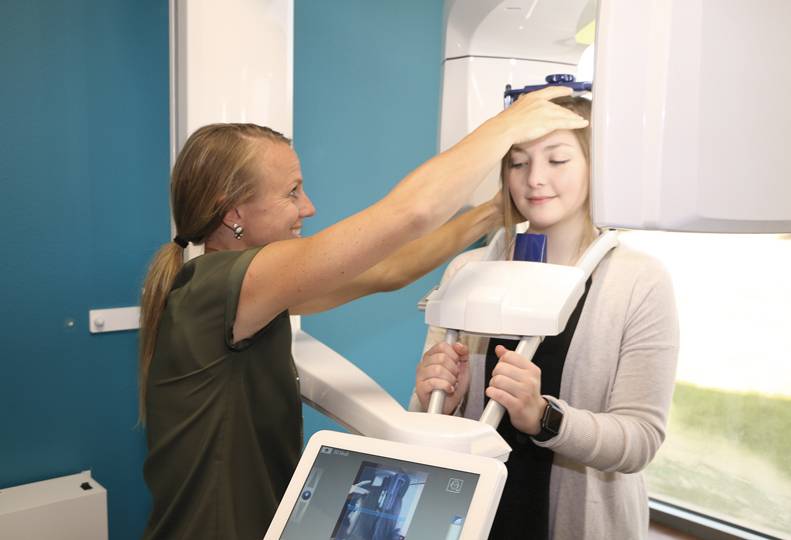 Rachae Bell’s sentiments have gone from a skeptical, woo-woo, to a celebratory, woo-hoo, as it relates to what she once thought about being a chiropractor to now opening a second clinic more than 12 years later.

Bell, 37, still sometimes chuckles to herself about her decision to bypass medical school to become a chiropractor.

“In my head, chiropractic was very woo-woo,” she says.

To her that meant chiropractic techniques weren’t based in science.

“I thought that (science) was necessary for quality care,” says Bell, a former pre-med student with an undergraduate degree in biology.

Once convinced that wasn’t the case, she proceeded to earn a doctorate in chiropractic studies, and her Spokane-area practice has taken off since she started it seven years ago.

Over time, Bell wants the new location to serve as a research and development center hosting new technologies.

Bell says she’s a proponent of the Blair upper cervical technique, a specific system of analyzing and adjusting the upper cervical vertebrae of the spinal column.

“A lot of times you go to a chiropractor, you get adjusted and then you leave,” she says. “In our office, we have you rest in a zero-gravity position and then we recheck you so that we know that the adjustment actually achieved the desired changes we need to see.”

Blair is a blend of a variety of upper-cervical techniques used by chiropractors, Bell says.

“It is gentle. It is specific, and using my hands to adjust patients instead of instruments is very important,” she says.

As part of her practice, Bell employs the use of a cone beam computed tomography machine, which allows her to capture a digital view of a patient’s cervical spine.

Once used almost exclusively by dentists, CBCT technology has expanded to increase the field of view from the mouth to the upper spine, Bell says.

“We can see the entire head and neck. Without this imaging, we’re left to guess where, and to what extent, a misalignment exists,” she says.

Bell was born in Spokane, and her family moved a few years later to Davenport, Washington, where she grew up.

Bell graduated from Davenport High School in 2003 before attending the University of Redlands, in Redlands, California, where she earned her undergraduate degree in biology, while playing volleyball and basketball.

Her desire to study medicine started in her freshman year of high school when she sprained an ankle playing third base while attempting to tag a base runner. She was taken to the hospital for X-rays, she says.

“The doc there said I’d be out for six months, and playoffs were in three weeks. I told him, ‘That’s not going to work for me,’’’ she says with a laugh.

Her parents took her to ankle specialist in Spokane who placed her in a walking boot instead of putting her on crutches.

“I was back in three weeks to play,” Bell says. “That intrigued me to want to work with athletes to help them get back to doing what they love faster.”

In college, Bell got a chance to serve as an athletic trainer in the sports in which she wasn’t competing herself.

While applying to medical schools, Bell got the chance to observe at nearby Loma Linda University Medical Center, in the emergency room and other departments that included family practice, oncology, orthopedics, and pediatrics, she says.

Her observation also included the chance to view what she describes as overextended hospital personnel.

Meanwhile, in the ER, after seeing someone’s life saved, she often wondered what ever became of those patients after they were discharged.

“I’m a relationship builder; I’m a connector,” she says. “I wanted to know what happened to them.”

After coming home one day, as she shared with her roommate some of what she was feeling, it was the roommate – who worked for a chiropractor in Boise during the summers – who suggested to Bell that she consider becoming a chiropractor.

Bell scoffed at the idea.

As she continued to apply to medical schools, during a career fair at the University of Redlands, Bell met a recruiter from Life Chiropractic College West, a private college in Hayward, California, known for its chiropractic doctorate degree program.

“I wish I could remember who she was, she was just an amazing woman,” says Bell. “She was pregnant at the time and so passionate about chiropractic ... the body’s ability to heal from the inside out.”

The interaction with the recruiter created more intrigue in the chiropractic field.

“She helped me begin to see that chiropractic was more than neck pain and back pain,” Bell says.

Shortly thereafter, upon an invitation from the college roommate who had returned to her summer job at the chiropractor’s office, Bell got a chance to meet the owners of the practice. It helped further solidify her desire to be a chiropractor.

She enrolled in Life Chiropractic College West in the fall of 2008 and completed the four-year doctorate program in three years.

Bell says operating her own practice allows her the chance to interact with her clients in a way that would’ve been harder had she pursued the traditional path of medical school.

“This is just the fit right for me,” she says.