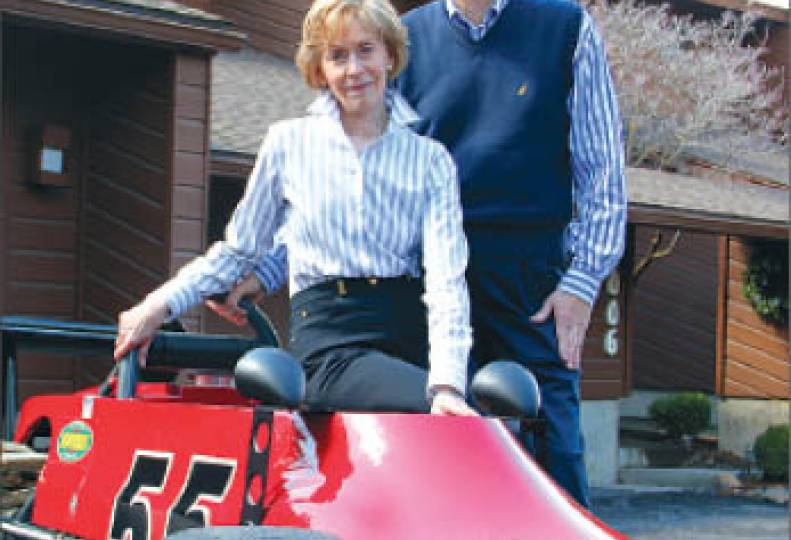 -—Staff photo by Treva Lind
Judi and Jim Sloane have become active in the Parkinson's Resource Center of Spokane since Judi was diagnosed in 2006. An upcoming race will benefit the nonprofit.

At least two years before her diagnosis of Parkinson's disease, Judi Sloane remembers the earliest sign that something was wrong. She found it difficult to fasten the buttons of a blouse.

"I remember thinking, how did these button holes shrink?" describes Judi Sloane, who lives in a South Hill home with her husband, Jim Sloane, former city of Spokane attorney now with the Paine Hamblen LLP law firm. Then, other subtleties gave her pause. "I noticed it was taking two hands to brush my teeth. In the shower, I realized one hand was washing my hair and one hand was just resting on my head."

Parkinson's disease, named after British physician Dr. James Parkinson who first described it in 1817, is a neurodegenerative brain disorder that progresses slowly in most people. An estimated 5,000 people in the Spokane-Coeur d'Alene area have the condition. Symptoms include trembling in parts of the body, rigidity or stiffness, slowness of movement, and impaired balance.

Judi, 67, knew her grandmother and her father had Parkinson's. After a neurologist diagnosed her in 2006, both she and her husband remember feeling lost about getting enough information on the disease, which typically has symptoms that begin on one side of the body and may spread over time to the other side.

"There wasn't any real information," Judi says. "We didn't know where to begin. We didn't know what questions to ask. You're in denial, but you're also moving into acceptance."

Through mutual friends, the pair met Ed Ewell, a Spokane pharmacist diagnosed in 1999 with Parkinson's who in 2001 founded the Parkinson's Resource Center of Spokane, a nonprofit group to provide resources and support for Parkinson's patients, their families, caregivers, and friends. Soon after that encounter, Judi and Jim plugged into the group.

Today, Judi is a PRC board member who stays active in its mentoring and support groups, and Jim is throwing his passion for vintage car racing toward a PRC benefit race at the Spokane County Raceway in Airway Heights on June 4 and 5. For entry fees of $15 for one day or $25 for two days, spectators can watch classic racing cars from the 1950s, '60s, and '70s—including Ferraris, Porsches, and Mustangs—compete on the 2.25-mile course. Money raised from entry fees will go toward the Parkinson center's support and services for Spokane-area residents.

Jim's own Crossle Formula Ford 2000 will be in the vintage race, although a friend will take the steering wheel. He says Ewell and his wife Jacquie encouraged the fundraiser idea after Jim talked about current safety improvements under way at the raceway worth $797,000 that are scheduled to be done by early May and include realigning the course and separating it from the drag strip. The improvements will enable the regional Society of Vintage Racing Enthusiasts to bring its first race to Spokane.

"We feel this could grow to a phenomenal fundraiser for the PRC," Jim says. "It's a combination of a car show and a car race."

The Sloanes have thrown their support behind the PRC because of the lifeline it provides for them and others with Parkinson's. Once Judi plugged into the group about four years ago, it led to her finding a neurologist who specialized in movement disorders and to a physical therapist who sees Parkinson's patients. The center also connected her with another female Parkinson's patient as a mentor.

"We talked about how you can live with Parkinson's, that you can challenge the disease through physical exercise and being socially active," Judi says. "You build brain cells so you can combat the disease."

Today, Judi also is a member of the PRC's Tremble Clefs singing ensemble, which has practice sessions to improve voice volume and projection leading up to performances. Some Parkinson's patients deal with loss of voice volume and control, and research has shown that singing can help offset that loss. Additionally, Judi attends the Women With Parkinson's Disease monthly brown bag lunch.

"It provides support and friendship with women at different stages of Parkinson's," Judi describes. "We laugh together. We share experiences and bring in experts. One day we brought in a permanent makeup artist because on some days the eyebrow pencil goes on a little better than on other days."

She and Jim now mentor through the center. "We were invited to a couple's home recently, and she had just been diagnosed," Judi says. "She was experiencing the same fears, lack of information, and anxiety as I was at first. It's wonderful to be able to reach out to her the way someone did for me."

The couple also describes how the center provides monthly interactive health video conferences at St. Luke's Rehabilitation Institute that bring in regional experts as speakers, and question-and-answer sessions among attendees.

"Parkinson's is a very individual disease," Judi says. "It's very different for each person, although there are some common symptoms. It changes in your body, too. It's opportunistic. For example, under stress, I get TMJ (temporomandibular joint disorder) and the Parkinson's will move in and cause rigidity in my jaw, neck, and even into my eye."

Judi believes that the support and information she's received through the Parkinson's center has helped. "My particular disease seems to be progressing slowly," she says.

Although she has had family members who had Parkinson's, the disease isn't always inherited. The National Institute of Neurological Disorders and Stroke, part of the National Institutes of Health, says scientists have identified several genetic mutations associated with Parkinson's, and many more genes are tentatively linked to the disorder. Most researchers believe environmental exposure, such as to certain toxins, may increase a person's risk.

The institute estimates about 50,000 Americans are diagnosed with Parkinson's each year, although an accurate number is difficult to target because many people in the early stages of the disease assume their symptoms are the result of normal aging and don't see a doctor. There is no definitive test for the disease, and other conditions may produce the same symptoms.

More men than women get the disease, but the reasons for that are unclear, the institute says. The average age of onset is 60 years, although about 5 percent to 10 percent of people with Parkinson's have "early-onset" disease that begins before the age of 50.

The disorder occurs when nerve cells, or neurons, in the area of the brain called the substantia nigra die or become impaired, the institute says. Normally, these neurons produce a brain chemical known as dopamine, a chemical messenger responsible for transmitting signals between parts of the brain to produce smooth, purposeful physical movement. Studies indicate that most Parkinson's patients have lost 60 percent to 80 percent or more of the dopamine-producing cells by the time symptoms appear, resulting in abnormal nerve-firing patterns within the brain that cause impaired movement.

Parkinson's disease has no cure, so doctors focus on treatments that help control the symptoms, says the National Parkinson Foundation. Treatment may include some drugs that work directly or indirectly to increase the level of dopamine in the brain. Medical professionals also may recommend standard physical, occupational, and speech therapy as well as exercise, diet, and dietary supplements to help people with Parkinson's improve their mobility and flexibility.

Parkinson's is both chronic, meaning it persists for a long time, and progressive. By itself, it's not fatal, and many people live with the disease for 20 years or more, the institute says.