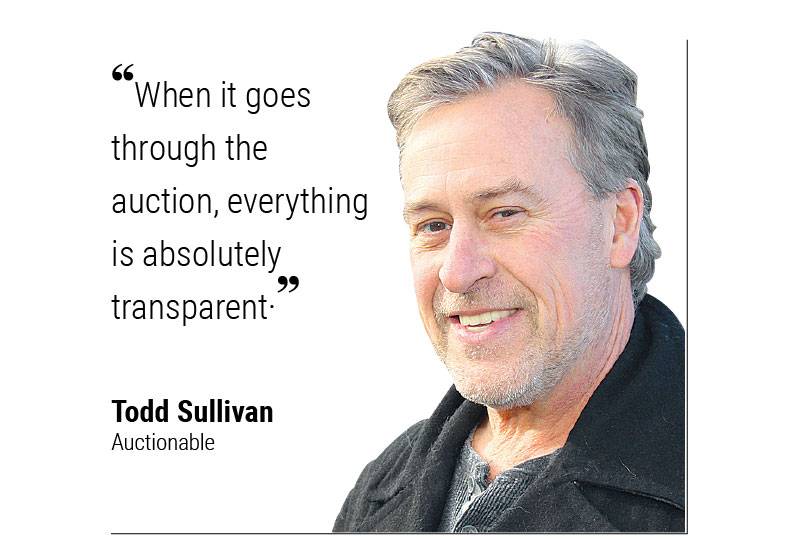 Auctionable, a new real estate tech company based in Liberty Lake, plans to launch this spring in the Spokane, Coeur d’Alene, and Boise markets, says Todd Sullivan, an Inland Northwest homebuilder and cofounder of the startup.

Sullivan says the company will provide homebuyers with the option to complete an entire home purchase-and-sale transaction online through its application’s “buy now” button. In addition, Auctionable will have a service for clients to purchase or sell a home through an auction.

Sullivan says Auctionable’s main function is combining the Multiple Listing Service search function, similar to those on other real estate sites, with the option for a Realtor to add a “buy now” feature and an auction platform.

When a buyer clicks the “buy now” button on a property, a 48-hour hold will be placed on the listing to show it as a pending sale, while agents are contacted, and the purchase and sale documents are created.

With the online auction option, listing agents control the reserve price, the duration of the auction, and buy-now price, if applicable.

“When it goes through the auction, everything is absolutely transparent. You know who’s bidding. You know the price of the houses,” he says. “You’ll get an email immediately saying you’ve been outbid. Then, you can go back in and put another bid in or click the buy-now button.”

Abbey Parsons, broker with Coldwell Banker Tomlinson, in Spokane Valley, says emerging real estate technology companies such as Auctionable or Spokane entrepreneur Jordan Allen’s Doorsey Inc., can be additional tools for agents to use to help their clients.

Millennials are the leading homebuying group and tend to embrace technology and transparency, Parsons contends, so a platform that provides those could be a great option for that generation.

“I think the industry as a whole—the buyers and sellers—are both wanting more transparency. They want to know more,” Parsons says. “Millennials … want answers and will research and go find answers.”

She adds that agents who remain educated about new technologies will serve their clients better as well.

Auctionable also will provide an online management tool called a project manager for both agents and homebuyers. For homebuyers, the project manager will offer scheduling, document storing, and contact information for services including movers, cleaners, and utilities.

For agents, the management tool also will provide scheduling, and track listings and communications as well.

Auctionable has three employees, including Sullivan and Strom.

Sullivan says the company also outsources work to two technical teams. By the end of the year, he hopes to have about 20 employees.

The next steps for the company will include a round of fundraising. If it’s successful at raising capital, the company will expand to Seattle and Portland before entering the Los Angeles and San Francisco real estate markets, he says.

The company also plans to launch an e-commerce store toward the end of the year, Sullivan says.

Sullivan declines to disclose Auctionable’s previous round of funding raised through a private investor in January. However, he says, after launching this spring, the company will seek to raise $3 million from venture capital markets. Then, the company will look to expand to additional MLS markets along the west coast.

Sullivan says he wants Auctionable eventually to be a competitive option to sites such as Realtor.com and Zillow across the nation.

The National Association of Realtors reported in November that 95% of all buyers use online tools in the search process. Sullivan says Auctionable will help buyers continue the process online.

The company will earn revenue by providing clients with access to mortgage partners, an escrow company partnership, and an online home store, that will sell home accessories and offer professional services, according to Sullivan. Customers won’t be required to use Auctionable’s partnered companies to complete their transactions though, he adds.

He contends the company will be less expensive for real estate agents than Zillow, which can charge thousands of dollars a month for agents to market themselves to homebuyers within a certain ZIP code.

“We’re a tech company. We’re not a broker. We’re not selling homes. But the service will be free for real estate agents,” Sullivan adds.

Sullivan says Newhomes.house was a platform for agents to sell pre-priced plans constructing new homes in partnership with certified homebuilders and lenders familiar with new construction loans. However, the company experienced challenges at the beginning of the pandemic.

“We launched that about eight or nine months before COVID hit,” he says. “It did well, generating $176,000 in revenue, which is very surprising for a startup. Then we ran right into COVID.”

At the onset of the pandemic, builders became too busy to accept new clients, Sullivan says. So, he decided to go back to the drawing board with an idea for another real estate tech platform.

“And that’s where Auctionable came from,” he says.