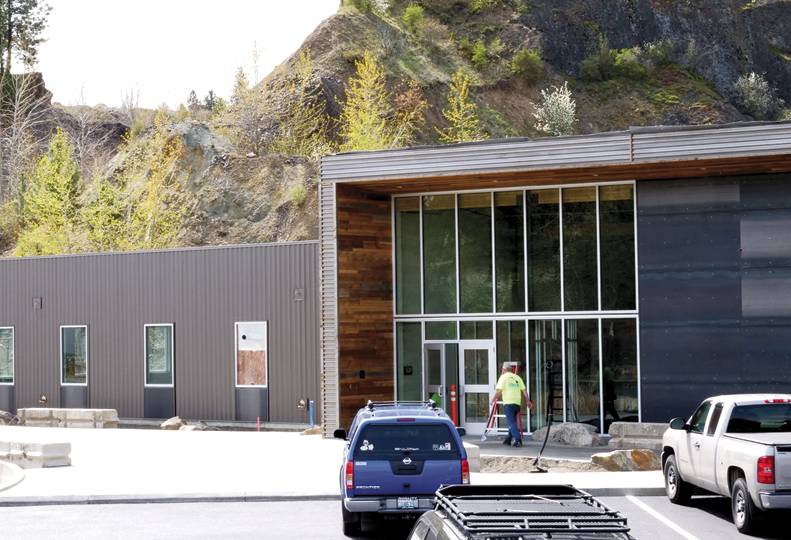 -—Erica Bullock
As envisioned, this new 15,000-square-foot building could house a mix of office, event, and common space.

The Spokane Conservation District’s 50-acre conservation and business campus, dubbed 8th Avenue Quarry, is entering a new stage of development with a goal to bring in businesses to the property to work onsite.

Meantime, the organization is considering other methods to bring the public into the Spokane Valley site, including trail improvements and the creation of public demonstration areas, says district director Vicki Carter.

The conservation district also is wrapping up the first phase of developments with the completion of a 15,000-square-foot multitenant building on the campus, at 4420 E. Eighth.

Carter says the district is interested in developing a 5,000-square-foot conference center in the new multitenant building, with a flexible layout that would allow for events that would accommodate 200 to 300 people. The structure then would have about 6,000 square feet of leasable tenant space and 4,000 square feet of common space.

Kilgore Construction Inc., of Colbert, is the general contractor on the multitenant building, which is designed by Integrus Architecture PS, of Spokane, and AHBL Inc., also of Spokane.

The conservation district initially had plans to lease the new multitenant building to Spokane Valley-based Intrinium Inc., but the proposal fell through in December and plans for the structure are now under consideration, Carter says.

Intrinium has been occupying a 7,000-square-foot preexisting building on the property at 4418 E. Sprague. Before the pandemic, the information-technology and cybersecurity company notified the conservation district of its need to expand, and Carter says she helped to secure $4 million in funding for a new building.

Since then, however, the company has given notice of its plans to leave the campus altogether, and the conservation district is now reevaluating how to use the space, Carter says.

Nolan Garrett, founder, owner, and president of Intrinium, says the company is leaving the campus because its staffing model has shifted from in-person to remote work since the pandemic began. He says the company is hiring staff nationwide and no longer has a need for office space for employees.

Carter says the 81-year-old conservation organization worked for 18 months on a master plan for the property, which envisions a total of five stages of development, with each stage taking about two years to develop.

The district’s offices are located on the same campus, directly east of the multitenant building, at 4422 E. Eighth.

“This property was so appealing to us is because it has significant hydrology and geology and it’s a unique property in Spokane,” Carter says. “It had been a rock quarry and also an asphalt batch plant so there was a lot of industrial use and it had come to a time where it needed to be reclaimed and revitalized.”

Carter says future development at the property will align with the district’s mission to teach about nature, explore nature, and potentially live in nature at the site. Plans for a potential farmer’s market, interactive art features, and tiny homes or short-term rental cabins are among the site considerations.

Spokane Conservation District is one of 45 conservation districts in the state of Washington and has 16 full-time employees. The organization is charged with the voluntary management of natural resources, although it’s a nonregulatory agency with no enforcement authority.

“Everything we do is to provide technical and financial assistance for (landowners) to be better stewards of their land or their property where it concerns their natural resources,” Carter says.