Copenhaver prepares land near base for development 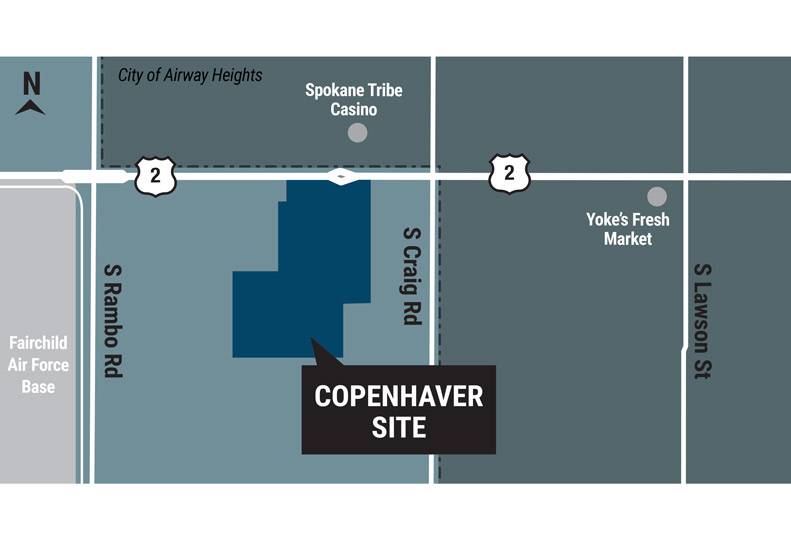 The owners of Copenhaver Construction Inc. have started planning for the development of 89 acres of commercial- and industrial-zoned land just west of Airway Heights, says co-owner Guy Copenhaver.

Prairie Ridge LLC, a real estate property investment company governed by four members of the Copenhaver family, has applied for a commercial grading permit with the city of Airway Heights to add water and sewer infrastructure to the site.

The site is across U.S. 2 from Spokane Tribe Casino, just east of Fairchild Air Force Base, and bordered to the south by 21st Street.

Grading at the site already has begun and is about 30% complete, Copenhaver says.

While the final development plans for the property are still in progress, Copenhaver says the company will file for permits for a new office and heavy-equipment mechanical shop in the coming months. He estimates the office and shop will occupy about 10 acres.

“We’ll hire a general contractor, and we will do all the site civil work ourselves, including all the earth work, groundwork, utility work,” Copenhaver says. “W.M. Winkler is going to do the concrete work.”

Copenhaver says Prairie Ridge will be open to development proposals for the remaining 79 acres of land, which will also be available for sale.

“Residential development is really out of the picture for this site” because of the Fairchild Air Force Base Joint Land Use Study’s no-fly zone, Copenhaver says. “But regional commercial, light industrial, and heavy industrial, all of those uses are okay.”

Copenhaver says rumors of a proposed Costco Wholesale Corp. at the property are hearsay.

“It’s really a lot of wishful thinking,” he says, adding, “It’s on the outskirts, but the thing we like about it is it’s such a large and clean slate. We’re not developers. If somebody had the vision and had the resources, I think it’d be a cool deal, but it’s going to take time and take money.”

Based in Creston, Washington, about 60 miles west of Spokane, Copenhaver Construction was incorporated in 1991 and currently employs about 80 people. The company specializes in rock crushing, aggregate products, site preparation, mass excavation, road work, and utility work.

“While we had quite a bit of space in our old lease, we weren’t configured in a way that lent itself to the type of collaboration that’s necessary,” he says.

Tenant improvements for Banner Marketing’s new office suite took about four months to complete and were performed by the property’s landlord, he says, adding that most of the renovation work was focused on removing walls throughout the office, in addition to updating equipment and minor office changes.

Banner Marketing’s move coincides with the company’s recent announcement of its rebranding efforts that were completed about a year ago.

“We updated our logo, our look, our messaging, and our persona,” Nasca explains. “I feel like our previous branding spoke more to specific solutions and not so much about who we were as a consultant and partner. Ultimately, we wanted to change the perception that we were a print-only company, but we’re really an omnichannel marketing agency.”

Nasca says business has been good so far this year and Banner Marketing is planning to expand from a retail-centered business focus to include the real estate and tourism industries, including actively working to become the agency of record for the Central American country of Belize.

•SRM Development LLC, a Spokane-based real estate company, has announced plans to produce nearly 1,600 senior housing units at nine sites in California. SRM recently secured the financing on a $25 million, 206-unit senior housing project in Studio City, California, according to a press release from the company.

SRM has also recently started construction on a $70 million, 157-unit senior housing facility in Hayward, California, that will be managed by Seattle-based Leisure Care. The project is dubbed Bellara and is anticipated to be completed in spring 2024.