Distribution space is in high demand across the Inland Northwest 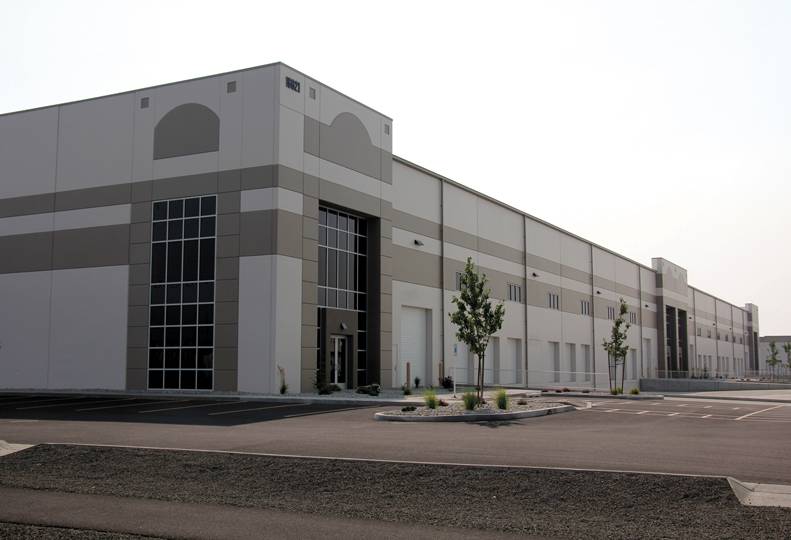 -Natasha Nellis
The Euclid Logistics Center, which Crown West Realty LLC has developed in Spokane Valley, is one of a number of distribution complexes coming online in the Spokane area.

Spokane is booming with new manufacturing and distribution warehouse space as developers attempt to seize on the area’s most in-demand commercial sector.

At least 2.6 million of that new square footage is attributable to the Amazon.com Inc. fulfillment center on the West Plains, which has another 1.6 million-square-foot facility underway in Spokane Valley. As the facility wasn’t completed by the time the report was released, it wasn’t included in the square footage increase.

“(Spokane has) this confluence of relatively cheap land. We are near an airport, and we are, of course, in the path of progress from the coast where all of the large containers coming in from ships to one of the many ports,” says Marc Mowrer, director of commercial leasing for Leavitt Capital Co.

Mowrer also works with AT Acquisitions LLC, which recently built a 187,000-square-foot distribution facility on McFarlane Road on the West Plains and plans to add another 218,000-square-foot facility next to the first building.

“(When) we built the 187,000-square-foot building, we didn’t have any groups that were right then ready to sign a lease, we were just building them not unlike Field of Dreams—where if you build it, they will come,” he says.

Building on speculation—in other words, without tenants committed to take the space—is becoming increasingly common in the industrial market. In Spokane Valley, nearly 2 million square feet of industrial space is planned or underway, including the 1.6 million-square-foot Amazon distribution center.

Crown West Realty LLC is developing the 500,000-square-foot Barker Logistics Center near the northeast corner of Barker and Euclid roads in Spokane Valley, near the former Katerra facility on east Garland Avenue.

Meantime, the 67,500-square-foot Selkirk Industrial Park is in progress near the corner of Barker Road and Garland Avenue.

At 3619 N. Barker, MyGrant Glass Co.’s new 105,600-square-foot distribution and office facility is edging closer to completion. That building is represented by Drew Ulrick, of NAI Black, and has about 25,000 square feet available to lease.

Just north of MyGrant is another 140,000-square-foot facility underway at 4414 N. Barker Road that’s represented by Darren Slackman, of NAI Black, says Mowrer. About 70,000 square feet of that is currently available, according to the NAI Black website.

Then, to the west, the 120,000-square-foot Euclid Logistic Center at the Spokane Industrial Park has been completed.

The burgeoning West Plains has roughly 4.2 million square feet either planned or underway.

“Demand for new industrial space has been fairly constant; the lack of product is what has been driving up costs,” he says.

The majority of his clients occupy space ranging from 1,500 square feet to 10,000 square feet, a range of space which is limited at the moment.

“There’s a lot of space for really big users, but for small users, there’s not much left,” he says.

Rent costs have increased to about 65 cents a square foot from about 50 cents the year prior. Still, McFarland says rates in the Seattle area are roughly double what they are in Spokane.

Demand is so strong that most listings are acquired before they publicly post, he says.

“Until there’s more product built, that sector will continue to be very hot,” he says.

Spokane’s position in the state as a gateway to the rest of the country, along with its relatively cheap land and multiple modes of transportation nearby, have been the primary drivers of the industrial space boom, Mowrer says.

“Spokane, as a secondary or tertiary market; we’re the next logical choice to be picked up,” he says. “It’s the same reason why Boise has exploded, why Albuquerque has exploded, and why Reno has exploded. All of those markets have cheaper land, close to an airport, and are in the path of progress for wherever those ports are.”

Additionally, the consumer shift toward online buying, which was accelerated by COVID-19, has aided in the boom, he says.

“COVID, for all the terrible issues that it caused and the very negative ramifications ... it just accelerated that paradigm from brick-and-mortar to a straight distribution facility to the end user,” he says.

Mowrer says supply chain shortages and other delays caused by the economic shutdown to combat COVID had limited-to-no effect on the building of industrial spaces.

Builders are working with slimmer margins due to supply cost fluctuations, and some projects are getting declined, especially if they required a lot of office space within the warehouse, he says.

“You look at industrial as the cheapest thing to build, and it still is. But man, it’s not cheap anymore. It’s gone up enough that the idea of this $50-to-$75 a square foot concept ...  that is a different era,” he says.

Supply cost fluctuations make it challenging to know just how much it costs to build a warehouse today compared to a as recently as 2019, he says, but it’s hovered at about double the rate of $50-$75 a square foot in recent months.