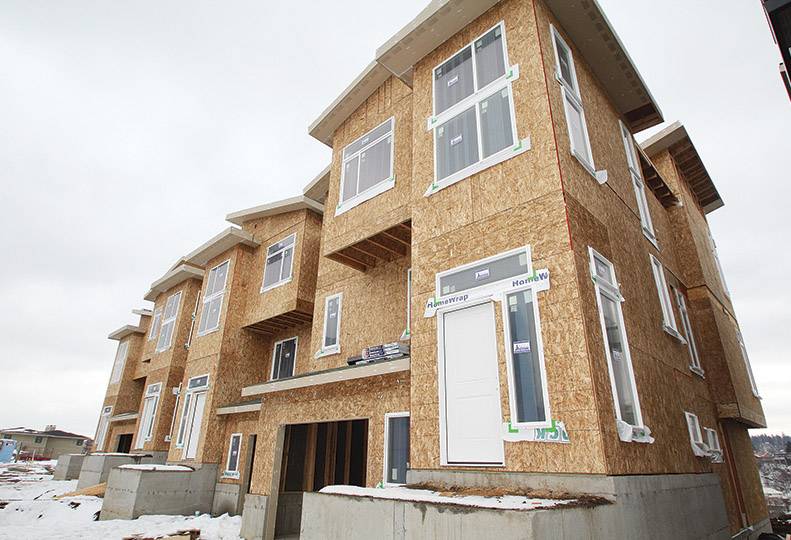 -—Linn Parish
Greenstone Corp., of Liberty Lake, adds living units along the south edge of the Kendall Yards development, overlooking the Spokane River gorge. Companywide, Greenstone sold a total of 204 homes last year, including a number of them at this development northwest of downtown Spokane. 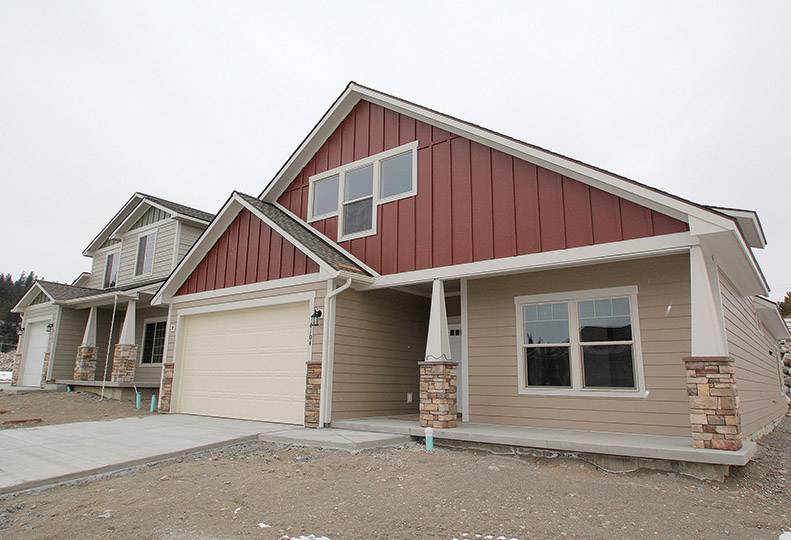 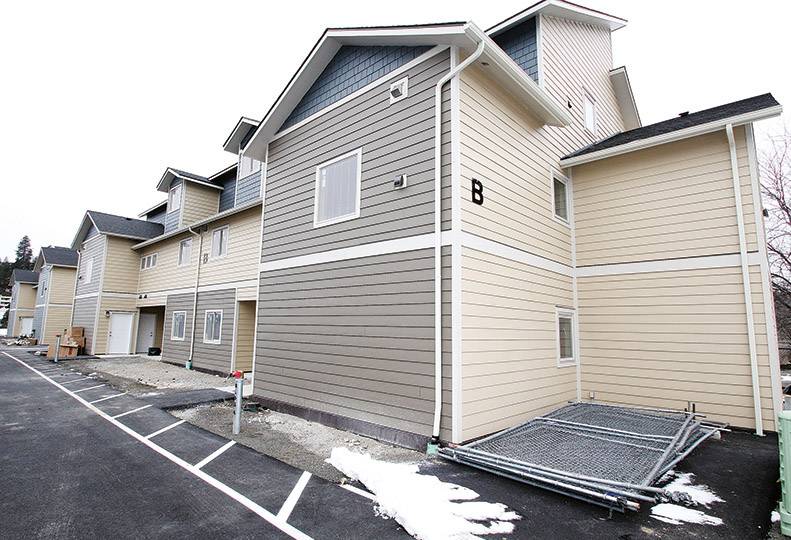 -—Kim Crompton
Cedar Crossing apartments near completion on Spokane’s North Side. The new units are part of a mixed-used development northeast of the Francis Avenue-Maple Street intersection.

The residential construction market here is continuing to strengthen, but some market observers expect the rate of improvement to soften a bit this year compared with the gains of the last two years. Regardless of the pace, it’s clear that the trend still is upward.

Spokane County and the cities of Spokane and Spokane Valley last year issued a combined total of 1,003 permits valued at $308.8 million for single-family homes, data from those jurisdictions show. They issued permits valued at another $95.1 million for townhouse, duplex, and apartment units. Comparative numbers weren’t available for 2012, because similarly separated residential permit data from the city of Spokane Valley wasn’t available for that year.

However, combined figures just for the county and the city of Spokane showed strong growth in new-home construction in 2013.

Those two jurisdictions issued 902 permits valued at $291 million for new single-family homes, their data indicate, with the county issuing the lion’s share of them for projects in unincorporated areas. That represented a 43 percent increase in the number of permits and a 39 percent increase in total valuations from 2012, when the city and county together issued 632 permits valued at about $208.7 million.

Joel White, executive officer for the Spokane Home Builders Association, cautions that sizable percentage gains in the number of permits being issued during the last two years should be viewed in the context of the depths to which the residential real estate market had sunk during the Great Recession. The level of new-home construction here still is substantially below what it was in the years preceding the recession, White says.

Market demand slowed down at the end of last year and early this year, but for the reduced number of builders that survived the recession, he says, “They’re as busy as they’ve ever been. They’re finishing projects that they lined up last year.”

White says he expects the residential construction market to continue to improve this year, but at a slower growth rate than last year once it rebounds from the winter slump as the weather improves.

“We’re still not back to a normal level for Spokane, but we’re getting closer,” he says.

Returning to a normal level of construction activity here is going to present its own problems, White says.

“We’re going to have a workforce shortage when the industry does completely recover,” due to so many skilled workers leaving the industry during the downturn, he says.

Already, he says, some builders report they’re trying to get by with skeleton crews.

Joe Frank, vice president of Liberty Lake-based Greenstone Corp., parent company for Greenstone Homes, says, “We’ve always thought it was going to be a slow, steady slog out, and I think that’s still the case. We’re encouraged with the activity we’re seeing, but I don’t think we anticipate anything dramatic.”

Frank adds, “That’s what I would prefer to see—just a nice steady growth.”

Frank is the son of company CEO Jim Frank. Greenstone Corp. develops various types of projects, including residential. It currently has single-family home projects progressing at a number of locations, including Eagle Ridge, Rock Hill, River District, and Ponderosa Ridge in Spokane County and Montrose in Post Falls and Coeur d’Alene Place in Kootenai County.

One of the company’s most attention-getting project sites, though, is the 78-acre Kendall Yards mixed-use development along the Spokane River northwest of downtown.

“Kendall Yards continues to be a strong project,” Frank says, adding that the company is “really trying to do new and different” types of housing there. Consumers are showing a lot of interest in the housing options available there, he says.

The company expects to begin construction there in May on a $6 million, 56-unit apartment complex that will be called Highline West Apartments, he says. It will be located on a 1.5-acre parcel of land at the southeast corner of Bridge Avenue and Oak Street.

The project site is west of Maple Street, where Maple runs under Summit Parkway north of the Spokane River. Summit will be the main east-west boulevard through the Kendall Yards development. Ponderosa Ridge Homes LLC, a Greenstone construction affiliate, is the contractor on the Highline West Project, and Greenstone designed it.

Highline West Apartments will be a sister complex to the $9 million, 84-unit Highline Apartments complex, which is just east of the Maple Street underpass.

The Highline West complex will include eight apartment buildings with five to 10 living units in each building, and most of the apartments will be two-bedroom units with 1,100 square feet of living space.

Separately at Kendall Yards, Greenstone is moving toward completion of the $3 million Highline Lofts structure, a residential-over-retail project at 1209 Summit, east of the other Highline projects. Highline Lofts is a three-story, 27,000-square-foot structure with a number of retail units on the main floor and 24 studio and one-bedroom residential apartments on the second and third floors.

Frank says that structure is expected to be completed in about three months.

Additionally, Greenstone secured building permits last August to begin construction of 28 townhome units along Summit and Bridge, west of the Highline complexes. The company had said earlier that it expects prices for the townhomes to range from about $180,000 to $420,000.

Cindy Mathis, a spokeswoman here for Eagle Ridge developer Newland Communities Inc., described the Oregon-based company as a “value-priced” builder that would build homes in the master-planned community at prices starting in the low $170,000s.

Hayden Homes will build about 18 homes in the 91-lot ninth addition at Eagle Ridge, with homes in that addition expected to be priced from $170,000 to $290,000 and targeted at first-time and empty-nester homebuyers, Mathis said.

Newland Communities broke ground on the ninth phase at Eagle Ridge about a year ago and said all of the lots there were under contract with builders. Other builders in that phase include Greenstone, Paras Homes, and Morse Western Homes LLC, of Liberty Lake.

Eagle Ridge is a 554-acre development located west of U.S. 195 and about four miles south of the Interstate 90 junction. The development had about 700 occupied homes as of about a year ago, and a Newland spokeswoman  said the company anticipated bringing on 100 or so lots for each of the next three years, which would bring the development to its roughly 1,100-lot, build-out completion in 2016.

Copper Basin Construction is working on residential projects valued at roughly $25 million on a portion of the big River Run development near the Spokane River in northwest Spokane.

The projects will include a 118-unit apartment complex, a total of 16 townhouse-style rental units, and 38 single-family homes. The construction is planned in a number of phases, some of which will be developed simultaneously, in the northwest section of River Run.

The original River Run development includes 170 single-family lots on 130 acres, with the southern edge of the development fronting the Spokane River. Fort Wright LLC, of Spokane, which is headed by brothers Tim, Mike, and Dan Murphy, has been developing the subdivision for more than a decade.

Copper Basin, a longtime North Idaho developer and home builder, expanded into the Spokane market five years ago, buying lots in residential subdivisions that had been started by other developers in Liberty Lake, on the Five Mile Prairie and on the West Plains. The company has specialized in building homes for the entry-level market, with prices ranging from about $130,000 t0 $260,000.

PDH LLC, a Spokane Valley company owned by prominent builder-developer George Paras, is proceeding with a project it began last year to develop the bulk of a stymied 300-plus lot subdivision that’s adjacent to the big Northwood neighborhood and overlooks Spokane Valley.

The planned development, the previously mentioned Valley Springs, includes 363 preliminarily platted lots, 39 of which had been developed as of last August, but Paras said the total number of lots probably will be reduced to around 324 over the course of the multiphase development. Paras Homes, a separate company in which Paras is a principal, will build most of the homes there, but other builders also might participate in the project, he said.

The large, upscale Northwood development is located on sloping, wooded terrain west of Argonne Road and north of Upriver Drive and encompasses a couple of hundred homes. Valley Springs will be located on a hillside just west of Northwood’s sixth addition and will extend west to Thierman Road.

Along with the multifamily construction activity happening at Kendall Yards, sizable apartment and renovation projects—some of them targeted at low-income seniors—are under way at locations elsewhere in Spokane County.

Acting as its own contractor, Rudeen Development LLC, of Liberty Lake, started work last year in Spokane Valley on one of the area’s larger projects, the 135-unit Mirabolante Apartments complex, which city of Spokane Valley officials valued at $14.8 million.

The project site is near the southwest corner of Broadway Avenue and Conklin Road, about a half-mile east of Sullivan Road.

Meanwhile, Catholic Charities of Spokane expects to wrap up work by this fall on a $3.5 renovation of the historic eight-story, 83-unit Delaney Apartments building, at 2442 W. Riverside, that also provides housing for low-income seniors. The construction arm of Spokane Valley apartment development company Inland Group LLC is the contractor on that project.