Span over river will go out to bid in fall 2022 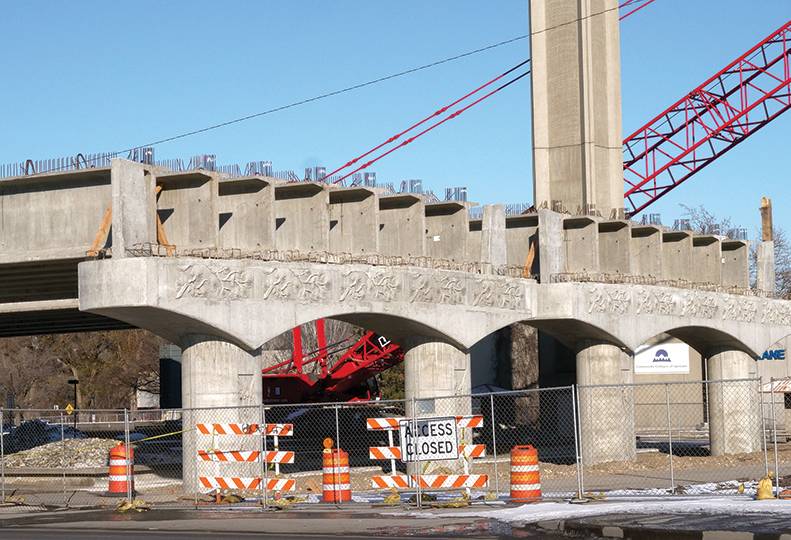 -Virginia Thomas
The Washington state Department of Transportation worked with Spokane Arts to add elements to the structure near Spokane Community College. Those elements will be colorized once construction is completed.

Recent progress on the North Spokane Corridor has been conspicuous as sections are completed along North Market Street and near the Spokane Community College campus.

Washington state Department of Transportation design project engineer Bob Hilmes says work has been swift after completion of a project that involved relocating BNSF railway tracks to make room for the $1.49 billion highway.

“That work was completed last fall, and that allowed the floodgates to open for all the construction north of the Spokane River,” Hilmes says.

Scheduled to be completed in 2029, the corridor ultimately will create a 10.5-mile freeway linking Interstate 90 in east Spokane to U.S. 395 north of Spokane. The project received $194 million last year for the current biennium.

“If you’re driving north of Mission Avenue, you’ll see the girders being set,” he says. “The deck placement will start this spring.”

Work on that phase is expected to be completed this year, he says. Much of that section will feature designs inspired by native plants and animals—such as arrowleaf balsamroot flowers, redband trout, and pine trees—cast into the concrete of the piers, columns, and crossbeams of the freeway structure.

“We worked through Spokane Arts and onboarded an artist to come up with artistic renditions of the things that came out of the public engagement process,” Hilmes says. “At the end, we’ll colorize those so they come to life and make the public spacing around those structures come to life.”

Next, the WSDOT will focus on constructing a bridge across the Spokane River, Hilmes says. The project will go out to bid in the fall and is scheduled for completion in 2024, Hilmes says.

Construction of the North Spokane Corridor also includes extending Children of the Sun Trail, which currently curves northeast from Hillyard to the Fairwood area of North Spokane.

“We’re still in the process of determining where the trail goes, south of the Spokane river, other than it has to follow the corridor generally,” Hilmes says. “We’ll connect it to other regional trails as we work through that. There’s the southeast trail on the south side of the river, a future railroad trail we’re planning to connect to, and, on the far south end, there’s the Ben Burr Trail.”

The North Spokane Corridor is funded by biennial allocations through the Connecting Washington transportation package, passed by the Washington state Legislature in 2015.