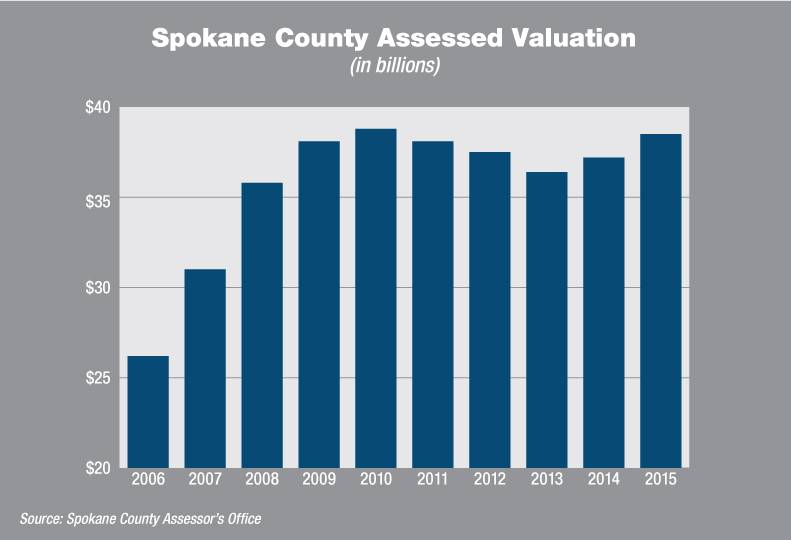 The overall property value in Spokane County ticked upward in 2014 for the second consecutive year.

Prior to the 2013 valuation, property values fell for three consecutive years to a low of $36.4 billion in 2012, 6 percent below the 2009 peak, due to the lingering effects of the Great Recession on the real estate market.

Property taxes levied for 2015 totaled a record $529 million, which is up 3.8 percent compared with last year’s total taxes.

Taxes for 2015 are based on the 2014 valuations. Tax rates, though, have been fairly level for the last three years, Hodgson says.

The 2014 value of new construction totaled $504.4 million, up a third compared with a year earlier.

New construction also accounted for 42 percent of the 2014 increase in the county’s total valuation.

New construction valuation only includes new projects that were substantially completed by July 31.

“What happens after July 31 goes onto the next assessment year,” he says.

For example, most of the $135 million Davenport Grand Hotel project downtown, likely will be assessed this year and go onto the tax rolls next year.

The county government’s take of the total tax assessment is about 11 percent.

The majority of the assessment, 56 percent, goes to local and state schools, while 16 percent is divvied up among Spokane, Spokane Valley, and 11 other incorporated cities in the county.

Hodgson says property owners appealed 829 valuations for the 2014 assessment year. Of those, 331 cases resulted in some reduction in assessed value.

As of earlier this week, six cases were outstanding and scheduled for hearings before the end of the month.

“It’s amazing to have all of the hearings done in February and March,” Hodgson says. “Not that many years ago, hearings used to go into September.”

Hodgson says a historically low number of appeals have been filed under Assessor Vicki Horton’s tenure. Horton was first elected in 2010, and she’s now serving a second term.

He attributes the reduction in appeals to a flatter real estate market and improved quality of assessments through the use of modern software and advanced programs.

The Spokane County Assessor’s Office revalues all real estate annually and physically inspects each property at least once every six years.

State law mandates that all property must be assessed at market value.

The Assessor’s staff has 43 employees, including 24 appraisers, Hodgson says, adding that the department hasn’t had any growth in staff for several years.