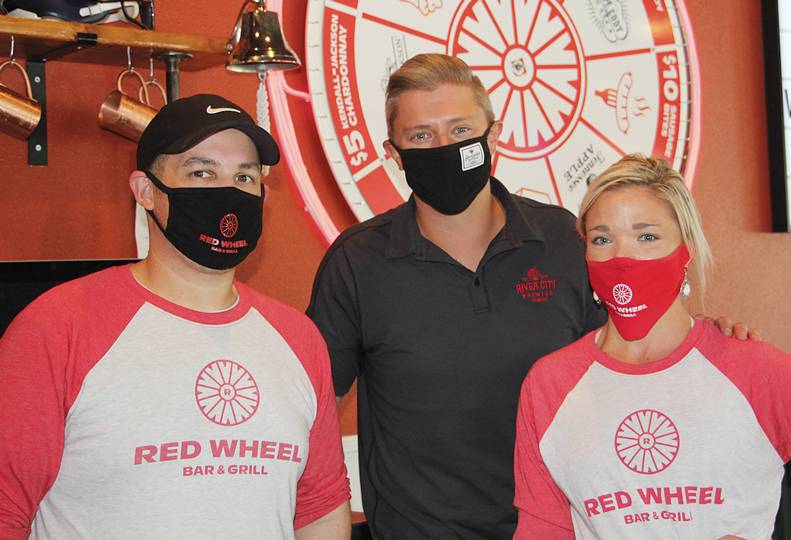 Every hour, on the hour, an on-duty bartender literally spins a mounted red wheel behind the bar. A different drink is listed in each space on the wheel, and wherever the wheel lands, that drink is $4 for an hour.

Then there’s the ‘Half-Off Table,’ which is available on a first-come basis. If your party can secure that table, for the next two hours, everything on the food and drink menu is half off, Tangen says.

But what has the 36-year-old Tangen excited about The Red Wheel more than anything is its location, at 501 S. Thor, on the lower South Hill.

“It’s another 24 blocks to the next spot,” he says excitedly.

The Red Wheel originally was scheduled to open March 19. On March 23, Washington Gov. Jay Inslee signed the “Stay Home, Stay Healthy” order requiring restaurants to stop serving on premises in the effort to stop the spread of COVID-19.

Despite the setback, Tangen says he still felt the restaurant could be successful because of where it’s situated.

Tangen says he acquired the building, which formerly was occupied by a pizzeria, and promptly “opened it up” after installing large windows to allow more natural light in, building a patio off the back, which will soon be expanded, and soon installing a garage door on the south side to create an even more airy feel to the establishment.

With 14 employees, the restaurant serves American-style food specializing in burgers and sandwiches, he says.

Despite the fact business is off to a strong start at just 50% capacity due to continued statewide gathering restrictions, Tangen says he’s indeed worried about the future of the restaurant business.

“I feel like this is going to be me and my partners’ last restaurants for a while,” he says. “The bankers we talk with say lending in the hospitality industry is at least another three years out.”