CornerStone to include mix of condominiums, offices 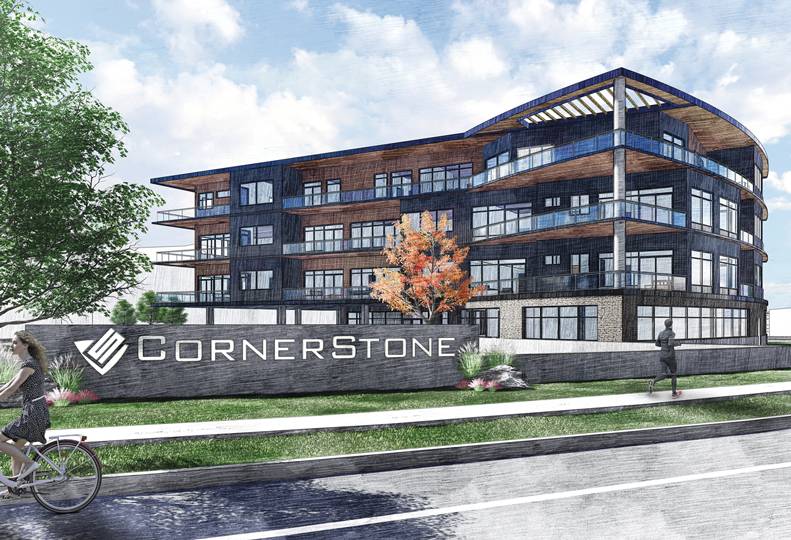 -Architects West Inc.
Work on the CornerStone project is expected to start later this month.

Longtime developer John Stone and partners Nikole Cummings and Ryan Martin are taking their last bow in the development of the Riverstone District with plans to build one final mixed-used building in the Coeur d’Alene urban village.

The four-story building will be located at the northwest corner of Riverstone Drive and Beebe Boulevard, on a triangular parcel of land across Beebe from Red Robin Gourmet Burgers & Brews.

“It’s kind of the last lot that we have to develop in Riverstone that wasn’t already owned by someone,” says Cummings, of Riverstone Holdings LLC. “Before we hung up our hat on the project altogether, we wanted to do one last fun little building that was a little bit unique in Coeur d’Alene.”

A total of 15 living units are planned on the upper three levels of the 57,000-square-foot project, while the ground floor will be office space available for lease, says Cummings. Underground parking, with two parking stalls per unit for a total of 30 parking stalls for residents, is also included in the project, she adds.

The condos will include a mix of two- and three-bedroom units on the second and third floors, while the fourth floor will house three penthouse units.

Information provided by Architects West says the residential units will include “spacious balconies, spectacular views, high-quality interiors, underground parking for owners, and easy, convenient access to everything Riverstone and Coeur d’Alene has to offer.”

Crews are slated to break ground on the project later this month, says Cummings. The project is expected to be completed in summer 2022.

Cummings notes that the timeline of the development is dependent on building material availability and how quickly the company can acquire the materials.

Cummings declines to disclose a total construction value of the project, dubbed the CornerStone, noting that the development company is currently receiving final bids for the project. That cost also will determine the price per square foot of the condominium units, she adds.

“Hopefully, we’ll have that homed in on by mid-June when we break ground,” she says, adding that the company is finalizing the design of the building.

For comparison, Ginno Construction completed a $6.5 million, three-story, eight-unit condominium project with underground parking in downtown Coeur d’Alene last year. Dubbed Seven27, that project is roughly half the size of the CornerStone project.

The project has presented some challenges, she adds, noting that the triangular shape of the property is tricky to develop a square structure on.

CornerStone will be the first project with a residential component the team has developed since the Village at Riverstone condos were built in the mid-2000s.

Stone began developing the 160-acre Riverstone development in the late 1990s. In total, the development is estimated to be valued at more than $350 million. The development contains about 40 restaurants and businesses, as well as three hotels and hundreds of condos and apartments. It celebrated its 20th anniversary in 2019.

In December 2020, about 93,000 square feet of the development was sold to Bellingham-based All Terr LLC.