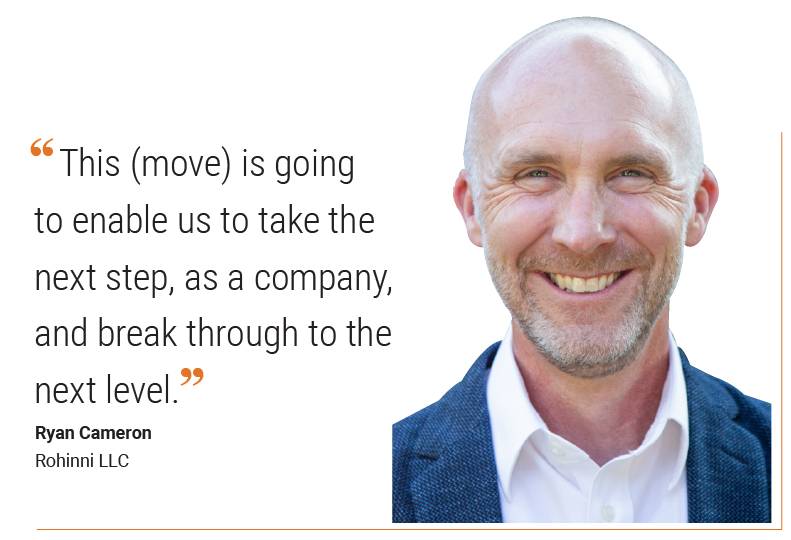 Coeur d’Alene-based tech engineering startup Rohinni LLC has hired a new CEO and plans to move across the state line to Liberty Lake later this year.

Rohinni, which engineers mini and micro-LED lights and manufacturing technology, has named Ryan Cameron as its new CEO. Cameron, who previously spent 27 years at Pocatello, Idaho-based ON Semiconductor Corp., started with Rohinni on July 19. He replaces Matthew Gerber, who left Rohinni in March to work for an Ontario-based web-hosting company.

Last month, prior to Cameron’s arrival, Rohinni signed a lease for a 28,000-square-foot building at 23221 E. Knox, in Liberty Lake.

It's the next step in the company's growth, Cameron says.

"Our customers are driving us to need a little more lab space," he says. "(The new facility) will expand our lab space by 170%, and that's really the impetus that's driving the move."

It's also the reason the company is crossing into Washington, he says.

"We couldn't find a facility that met all of our needs in Coeur d'Alene," Cameron says. "The Liberty Lake property not only allows us the lab space requirements that we currently need, but we'll be prepared for more growth. This is going to enable us to take the next step, as a company, and break through to that next level."

The building once was occupied by a Land Rover dealership. It later was a manufacturing facility for high-end outdoor products maker Integral Designs USA Inc., which filed for Chapter 7 liquidation in 2009. Most recently, it served as headquarters for video security company OpenEye, which has moved elsewhere in Liberty Lake.

Cameron says remodeling work--including removing some inner walls, rewiring, and painting--will begin in a few weeks. The company's 25 employees will be fully moved into the new space next winter.

"Some of our staff will start to move in during the fourth quarter, and we plan to complete the entire move by the first quarter of '22," Cameron says.

The expansion of Rohinni's physical location means it can hire more employees, Cameron says. How many it hires in the next six to 12 months will depend partially on the results of a strategic planning process.

"I'm assessing what the current strategy is, and then we'll be going through a strategic planning process and doing a lot of listening over the next couple of weeks and months," Cameron says. "By the start of the fourth quarter, we'll be taking some new ideas to the board on what the next phase of the company looks like."

The company currently is located at 2139 N. Main, in the Village at Riverstone development, northwest of the Coeur d'Alene city center.

Cameron says he held a variety of positions during his time at ON Semiconductor, which he joined shortly after graduating from the University of Idaho with an electrical engineering degree. He was most recently vice president and general manager of the industrial and offline power division.

"My background in semiconductor technology is in an adjacent space to what Rohinni's technology enables," Cameron says. "We service a lot of the same industries and applications, and the executive management part transports across those industries pretty well."

Cameron says he was attracted to Rohinni because it's a small company.

"I had over 500 people in my division at ON Semiconductor," Cameron says. "Being part of a smaller, more agile company where your decisions are pertinent, and being a leader of a really innovative and sharp team that has world-class technology and capabilities was just too good for me to pass up."