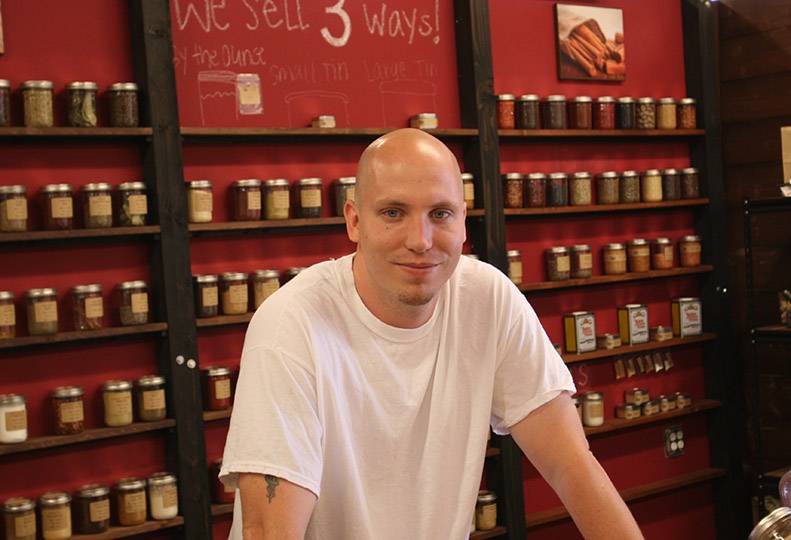 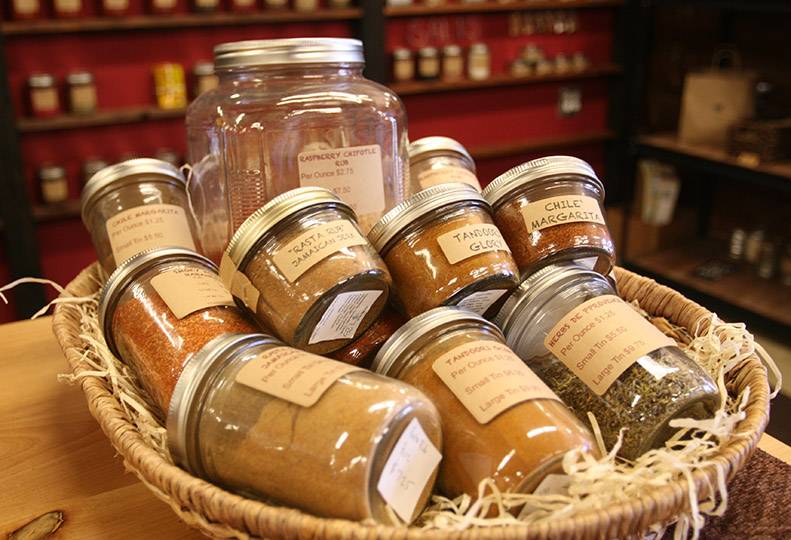 Pete Taylor has been in the restaurant industry for most of his life, working most recently as an executive chef with a catering company when he decided to spice things up by launching his own business, SAVORx LLC.

The company, which Taylor started almost two years ago, specializes mostly in producing and selling spices and rubs.

SAVORx products, sold online and at the Spokane Public Market at 24 W. Second, include more than 100 whole and ground spices, rubs, and infused finishing salts. Spices range from common ones such as crushed chili pepper, to more unique finds, such as raspberry flakes and beet root powder. The company sells nine rubs, including Chile margarita, pink peppercorn lemon thyme, and raspberry chipotle, which Taylor says is its most popular rub.

Products can be purchased in bulk by the ounce, or in four-ounce and eight-ounce square tins. Spice prices by the ounce run between 75 cents for whole coriander and dill seeds, to $15 for ghost chili powder.

The company employs four people full time, including Taylor, and two people part time, he says. He expects to hire three or four additional employers soon. Employees mostly work with retail customers in the store and at events, or handle packaging and mailing of spices and rubs.

Taylor began operating in the Public Market in May, he says, selling through its website and at events or farmers markets up until then, he says.

"It's just enough space to hold 100 spices and rubs, and we sell all the spice-grinding equipment there," Taylor says.

For July, Taylor projects the company will achieve $10,000 in online sales, and $40,000 in sales through its booth in the Public Market, farmers' markets, and events.

"That's what I love about the Public Market," Taylor says. "We get so many repeat customers."

The company also recently negotiated several contracts to supply spices to boutique shops in the Spokane-Coeur d'Alene area, he says, including a couple bakeries on the South Hill. He says sales at the company have increased sharply over the last year, due in part to its Public Market presence, and to him transitioning to full time at SAVORx.

"I wouldn't say it was stagnant, but we didn't do sales like we do now," Taylor says of the company a year ago. "In the last two months, it's grown by leaps and bounds."

He says online, more people are buying a la carte spices, or by the ounce, instead of purchasing tins.

Taylor estimates to date, he's put between $50,000 and $60,000 into the business, and says he'd like to get additional investors onboard soon. He says any profit the company has turned since he founded it has been put back into the company to help continue its expansion. It's most recent undertaking is a wooden spice rack it's looking to fund through its second crowdsourcing venture.

"Ever since we launched the Kickstarter, we've seen a huge increase in sales," Taylor says.

Kickstarter is a project crowdsourcing platform that enables people to pledge money online, typically in exchange for a specified amount of goods or services.

Partnering with food blogger Heather Scholten, he launched his second Kickstarter campaign last month following a successful campaign two years ago that raised almost $13,000, which Taylor used to get SAVORx up and running.

The campaign aims to raise $50,000 to fund its next product line, a spice rack—he refers to it as a spiceologist block—that holds up to 44 tubes of spices.

The rack, which Taylor jokingly describes as what would happen if a spice rack and butcher's block had a baby, is a two-piece, tiered wooden rack that holds glass vials similar to test tubes of spices.

Similar in size and shape to a kitchen knife block, each piece holds 22 spices, with customers having the option of buying just one piece or both pieces. Each tube holds almost two ounces of spices, he says.

The funding would be used to make roughly 200 full sets a week with the intention of being able to begin shipping them to customers by the end of the year.

With slightly less than a month left in the campaign, SAVORx had raised more than $20,000 toward its goal.

Although spices are popular, Taylor says the company's main revenue generator is its rubs, which is what he sells at farmers markets.

SAVORx buys spices from two companies in Portland, Ore., and San Francisco, Calif. that receive spices from around the world.

Taylor says he's mulling the idea of creating a subscription-based rub of the month club, and adding seasonally-available rubs to its lineup.

In addition to individual spice and rub sales, SAVORx has garnered 80 subscribers for its culinary kits. For $14.95 a month, a subscriber receives two kits a month that include a recipe, all of the SAVORx spices needed to prepare the dish, and a link to an instructional video.

He says that service, which earned him honors at the Spokane Start-up Weekend competition in April 2012, has continued to grow.

Taylor says the company uses additional storage space at the Public Market for processing that he refers to as the spice cellar.

Taylor says he uses the space, which is only a few hundred square feet in size, to store, package, and grind spices he later sells. He says the space is at capacity currently, and he anticipates he will be looking for additional processing space soon.

Taylor says he's planning a trip to India this year, with plans to set up a fair trade market for spices, similar to that which exists for coffee beans. He hopes he'll be able to buy spices directly from farmers after the trip.

"When you're using a middle man, you don't know how long it's been in the warehouse," Taylor says, adding the quality of the products is important to him.

SAVORx is one of at least a couple of spice companies here. Others include The Michlitch Co., operating as Spokane Spice at 130 N. Stone, and Spice Traders Mercantile Inc., at 15614 E Sprague in Spokane Valley.