Building will have 51 apartment units, some commercial space 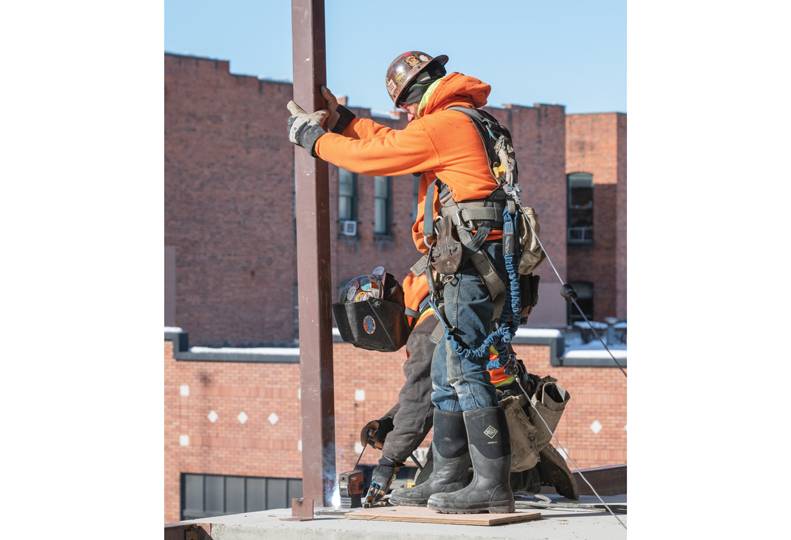 -Erick Doxey
Steelwork is erected on the 1st Avenue redevelopment project in downtown Spokane. The building will be seven stories tall when completed.

Work on the seven-story, $10 million-plus multiuse building on west First Avenue at the west end of downtown is well underway.

Spokane-based T.W. Clark Construction LLC is the general contractor on the project, and Trek Architecture, also of Spokane, designed it.

Jordan Tampien, project lead, says three floors have already been constructed, and construction on the fourth floor began in early March. The 52,800-square-foot building is expected to be completed by year-end.

Tampien is also a Spokane real estate broker and co-owner of Tampien Brothers LLC, which does business as 4 Degrees Real Estate. The business will be the management company for the project, named 1st Ave Redevelopment.

The structure, located at 1309 W. First, will have 51 one-bedroom and two-bedroom apartments, ranging in size from 550 to 1,050 square feet of living space, says Tampien.

The development will have an “urban flair,” according to Tampien, and will be geared toward attracting young professionals. To that end, the development will include a fitness center, high-speed internet, and lockers for packages.

The developer also is converting the roof of the neighboring building at 1303 W. First, home of the call center and wireless services company Pass Word Inc., into an outdoor patio area that could include greenery and decking, Tampien says.

Also included in the project is just under 3,600 square feet of street-level unfinished commercial space that will be made available for lease.

A vacant, single-story building located at the project site was demolished in August.

The developer also has tentative plans for a two- to four-story parking garage, which are on hold until the company can gauge demand for the structure, Tampien says.

Tampien has been active in the Spokane real estate scene lately, and his other in-progress or recently completed projects include the Brick West Beer restaurant and brewery, at 1312 W. First, which he co-owns with his brother Joel Tampien and Matt and Ryan Goodwin. Other projects include $1 million in renovations to a two-story building on the west end of downtown at 1229 W. First, which will be converted into Airbnb-style, short-term lodging for visiting corporate executives; and $1.4 million in renovations to a building at 915 W. Second, for new offices for 4 Degrees Real Estate.