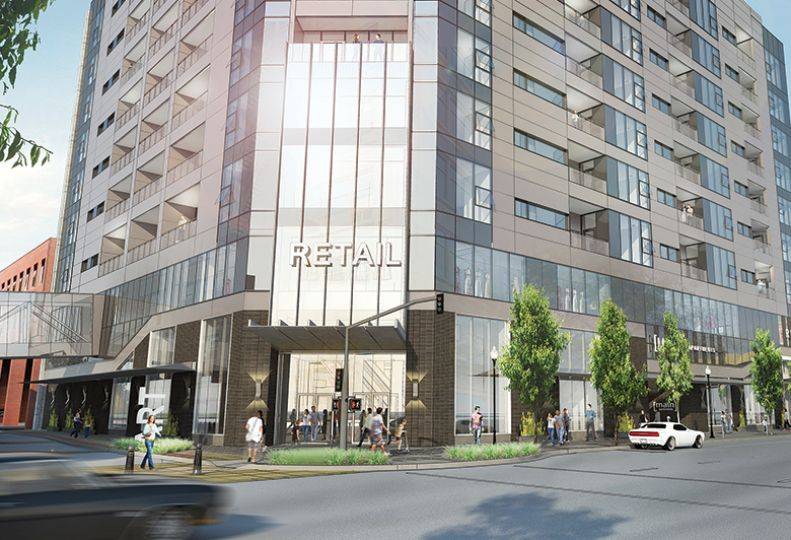 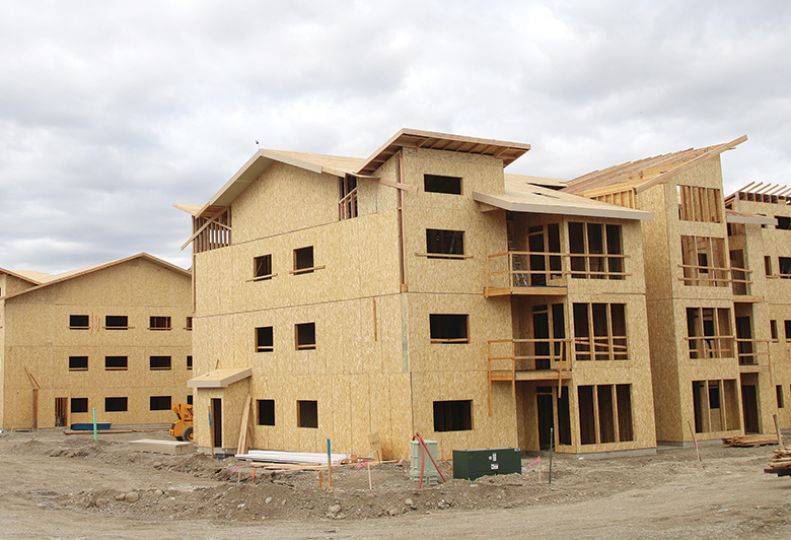 -—File
Work started last year on the $17.5 million Bella Tess apartment complex, in Spokane Valley. It was one of the larger projects permitted in the Valley last year. 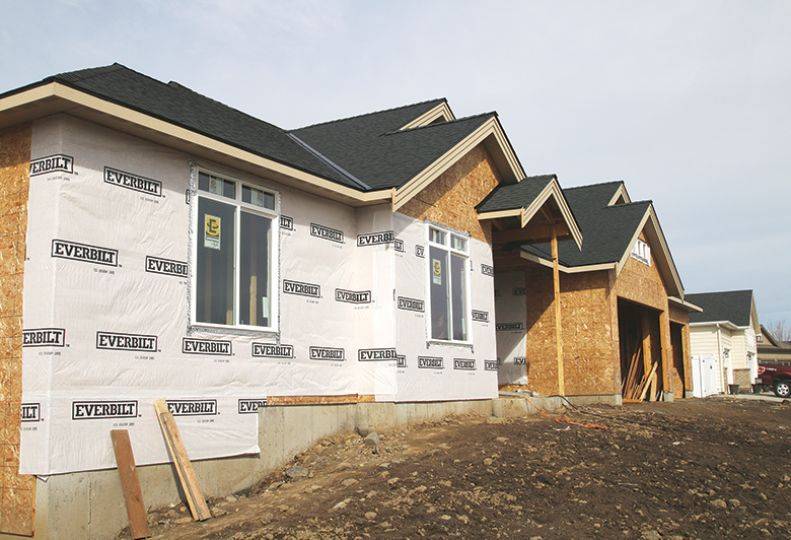 -—Mike McLean
Builders in the Spokane area pulled permits last year for 1,276 new single-family homes, such as the one being built above by All West General Contracting Inc., of Spokane, in the Five Mile Heights neighborhood.

The residential construction market here, much like last year, is expected to continue to sizzle through the rest of this year, although a worrisome lack of developable lots and qualified subcontractors is increasingly on developers’ and builders’ minds.

The expectation of more growth in construction of both single-family homes and apartment buildings is based partly on the fact that last year’s robust permit activity is providing a good springboard for further gains through the rest of 2017.

Some market observers believe, though, that demand is peaking and could begin to weaken late this year.

As the Journal reported recently, single-family home permits in the County’s three largest jurisdictions were up 16 percent in unit numbers and 13 percent in dollar volume last year compared with 2015 totals.

The rate of increase in new-home starts last year outpaced the growth in overall home sales, which includes existing home sales, through the Spokane Multiple Listing Service. The MLS 2016 growth rate in unit sales was 9.9 percent.

The lack of developable lots and shortage of skilled laborers are “slowing down construction as far as the time to build a home or unit. It’s not stopping the project from being built; it’s just taking longer,” says Joel White, executive officer for the Spokane Home Builders Association.

“We’re still in a great position. We still have a shortage of available home inventory,” driving up the demand for new homes, White says, adding, “The industry is busy to start the year. Last year was a great year. We exceeded the average rate of new home construction significantly.”

He says he expects the level of home-building activity here this year to be similar to last year, but says rising mortgage rates and lumber prices, among other contributing factors, likely soon will have a dampening effect on the market.

“We are reaching a peak. I don’t know if we’re going to be able sustain this peak for a long period of time. I think it could tail off toward the end of the year,” White says.

In a recent interview with the Journal, Craig Roberts, Condron Homes’ general manager, described 2016 as a “great year” for homebuilders, and said he expects continued growth in 2017. Roberts says Condron Homes sold 32 custom homes last year and expects to sell 45 this year.

Condron Homes is primarily building homes in the $350,000-plus range in the Wandermere Heights and Pine Ridge developments on the North Side. Roberts says average prices for Condron Homes in 2016 were up about $10,000 compared with a year earlier.

Looking forward, Roberts said there’s some concern that demand for new-home construction could outpace new-lot development in coming years. “We’re going to be in need of (lots) two to three years down the road if sales continue the way they are,” he said.

Viking Construction, a longtime Inland Northwest home builder, built about 325 homes in Eastern Washington and North Idaho last year, marking its best year since 2005, and potentially could increase that by 10 percent this year, says Scott Krajack, the company’s land acquisition and development director.

“This year is starting out busy again,” Krajack says.

Viking develops some apartment complexes, but is predominantly a single-family homebuilder, having constructed several thousand homes in the Inland Northwest since 1980. It currently is building homes in nine neighborhoods in the Spokane area, four in the Tri-Cities area, and five in Idaho, Krajack says.

About a year ago, it launched one of its newest developments in Idaho, called Viking Estates, in Post Falls, just south of Post Falls High School, on 16th Avenue between Greensferry and Cecil roads. The subdivision has a total of 87 lots and is being developed in three phases. Home prices in that higher-end neighborhood start mostly in the $300,000s.

Formerly based in Hayden, Idaho, Viking Construction moved last June into the former Nut Factory property on the east edge of Spokane Valley and has consolidated its offices there, although it remains active in Idaho. The property, which it bought in 2015, includes a 15,600-square-foot building and a little over 5 acres of land.

“I don’t think we see any major indicator that there’s going to be a drop-off, but it’s a matter of time” before the market starts to soften, Frank says.

The total number of homes the company built last year was “probably about 25 percent higher than we projected,” and the average sale price for them was just over $300,000, he says.

In early 2015, Hayden Homes agreed to buy 1,200 residential lots in the Inland Northwest from prominent homebuilder and developer Copper Basin Construction Inc., of Hayden, Idaho, in a phased approach over a several-year period.

Meantime, Copper Basin said it plans to focus on its land development and multifamily residential construction, while it phases out of single-family home construction.

A company spokeswoman couldn’t be reached for comment, but Hayden Homes had projected that it would build 300 homes in the Inland Northwest last year.

Developer Newland Communities Inc. says sales at its big Eagle Ridge community remain strong as it begins work on the 84-lot, 12th and final addition there.

“We had almost 100 home sales last year. Things have not slowed down,” says Lori Henriksen, vice president of operations here for the Oregon-based company, adding that she expects this year’s sales to surpass last year’s total.

“What’s different is the higher price point has come back,” and the development is seeing a rebound in sales to buyers from “feeder” markets outside of the Inland Northwest.

Eagle Ridge is a 554-acre development located west of U.S. 195, four miles south of the Interstate 90 junction. The community had about 850 homes at the end of 2015, and will end up with about 1,080 homes when builders wrap up work in the final addition.

The development originally was approved for 2,300 homes but Newland decided to leave more natural area intact throughout the sprawling community, which resulted in the total build-out number of homes being reduced sharply.

The final addition will be at the south end of the development, south and east of the 10th and 11th additions, and a trail, stretching probably three-quarters of a mile in all, separates the 11th addition from the 12th addition, Henriksen says. Lot improvements should be completed in September, and home construction won’t start until October, she says.

Newland is continuing to work with the same four builders at Eagle Ridge, which include Hayden Homes, Greenstone, Paras Homes, and Morse Western Homes LLC, of Liberty Lake. Hayden Homes joined the roster of homebuilders there in 2013, bringing an entry-level line of homes into the largely upscale community.

Multifamily-housing construction has been continuing at fast-paced clip in Spokane County, with apartment projects accounting for four of the 10 largest construction projects permitted in the county last year.

As the Journal reported earlier this year, Rudeen Development LLC has obtained building permits to construct a $21.4 million, 221-unit second phase of the Blue Point Apartments complex north of Spokane in the Wandermere area.

The project site is on an 11-acre parcel of land at 15001 N. Wandermere Road, a quarter-mile south of Hatch Road, and is bordered by U.S. 395 to the west and Wandermere Road to the east.

The parcel of land where the second phase is to be developed borders the south side of a 6-acre parcel where Rudeen recently constructed the $9.9 million, 99-unit initial phase of Blue Point Apartments.

The demand for apartments has been hot enough that the vacancy rates have remained low despite a substantial number of new apartment units opening to prospective tenants.

Catholic Charities and its housing partners have multiple developments planned and under way that will provide nearly 500 low-income apartments in the area. Also, a couple of large apartment complexes targeting low-income residents are planned in Airway Heights.

The development, named Aspen Village Apartments, will be located at the northwest corner of Fourth Avenue and Cannery Road, near Shelley Lake. It will include five apartment buildings, four of which will have 24 apartment units, and one with 18 units, a city official said.

The second phase is to include six three-story apartment buildings, each with 20 to 24 units, and six garage structures with 36 garage stalls in all.

The Seattle office of Menlo Park, Calif.-based Katerra Inc. is the contractor on the project and Bernardo|Wills Architects PC, of Spokane, designed it.

In downtown Spokane, as the Journal reported recently, Spokane developer Ron Wells says financing is coming together for acquiring and converting the long-shuttered Ridpath Hotel complex into downtown housing in a project with an overall estimated value of $22 million.

Wells plans to redevelop hotel rooms on the second through 11th stories of the Ridpath tower into the Ridpath Club Apartments.

Baker Construction & Development Inc., of Spokane, is the contractor on the project, and the Spokane office of Coeur d’Alene-based Trindera Engineering Inc. is supplying engineering services. The apartment projects includes 110 one-bedroom micro-apartments, 54 one-bedroom units, and one two-bedroom unit, with all units ranging in size from 250 to 1,000 square feet of living space.

Separately, Centennial Properties Inc., the Spokane-based property developer that is part owner of the River Park Square downtown retail center, is continuing work on a major downtown apartment project. One involves the continuing renovation of the 10-story former Macy’s building, now called The M, which will include retail space on the first two floors and apartments on the upper floors.

Additionally, Centennial last year launched a project to convert four floors of the Chronicle Building at 926 W. Sprague downtown into apartments, creating eight living units per floor on the third through sixth floors in the seven-story structure.

MMEC Architecture & Interiors, of Spokane, is the architect on that project, and Walker Construction is the contractor.