Work on $2 million Blockhouse project could start in early fall 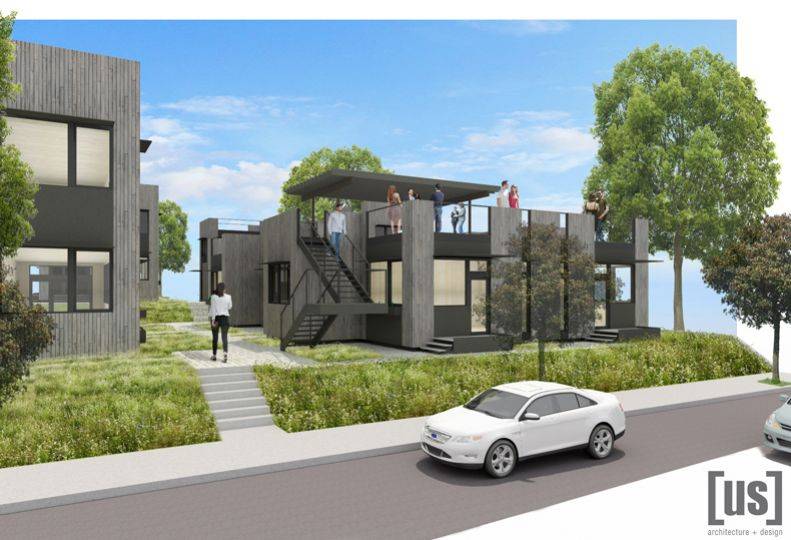 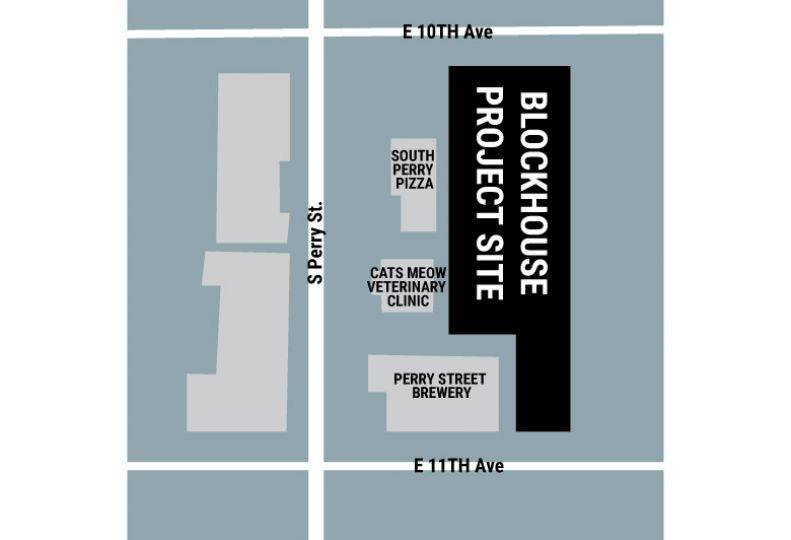 Six businesspeople from a variety of industries are coming together to build a $2 million “smart” housing development, called Blockhouse, in the South Perry District.

Andy Barrett, one of the partners in the Blockhouse collaboration, says the group envisions 16 rental units on nearly a half-acre site, at 1410 E. 10th, just east of South Perry Pizza and Perry Street Brewing. The living units will be made of cross-laminated timber panels, with some units reaching into the treetops overhead. Cross-laminated timber is a construction material created by gluing together several layers of wood (see a story about recent CLT legislation on page B3).

The configuration of living units on the site hasn’t been finalized yet. As currently planned, however, eight 240-square-foot studio units, four 480-square-foot one-bedroom units, and four 960-square-foot three-bedroom, two-story units will be constructed using what Barrett calls a Ground Control Smart Wall System. Made from CLT panels and fitted with plumbing and electrical wiring during the manufacturing process, a smart wall, which will be manufactured through Spokane-based Vestis Systems Inc., will be the heart and brain of each unit, Barrett says.

“For instance, you can talk to the wall and make a phone call. You can order your AmazonFresh. You can tell the wall goodnight, and it will lock the front door; it will turn your temperature down to what you want it to be, and turn off the lights you’ve got it programmed to do,” he says.

Barrett, who is also chairman of Spokane Valley-based remote camp shelter manufacturer Berg Manufacturing Inc. and managing partner of manufacturing startup incubator The Toolbox, says the Blockhouse project began a few years ago with a grant from Washington State University to develop a supply chain for cross-laminated timber. That grant brought Barrett together with Russ Vaagen, founder and CEO of Colville-based CLT manufacturer Vaagen Timbers LLC.

“We developed (Perry Street Brewing), and while we did that, we saw this opportunity and have been kind of waiting for the highest and best use,” Cody Coombs says. “We went and talked to Andy about doing cargo container homes, and that’s kind of how this all got transformed into Blockhouse. We just feel like the South Perry District is such a great community and a great area to try this out on.”

The project is currently in the predevelopment phase, according to city records. Collins says the ownership group expects to break ground by early fall, with construction being completed by the end of the year. The unusual speed with which CLT buildings can be constructed, compared with traditional methods, is one of the benefits group members say they’re excited about.

Barrett says, “If we can repeat Matthew (Collins’) beautiful designs over and over again in the factory, that’s where we can really eliminate or reduce a lot of the labor and inefficiency that we see in construction.”

Valliant adds, “We’ve got a shortage of skilled construction workers across all trades, framing included, and what (CLT) does for us is it uses less manpower to assemble on site. A lot of that stuff is already done in the shop, in the manufacturing process. All that results in speed of construction increasing and lowering overall cost.”

Vaagen says the speed of the process could create opportunities for the construction of affordable housing.

“I spend a lot of time in the Seattle and Portland markets, and when we see economic growth in those places, housing can’t keep up,” he says. “A lot of people talk about affordable housing, and I think it has a lot to do with the speed at which we can react to growing populations.”

In addition to the speed of construction, Vaagen argues that CLT panels are a more environmentally responsible construction. Because CLT culls small-diameter and sometimes diseased or dead trees, it minimizes some of the risk of wildfire. Its carbon footprint also is smaller than other construction materials, Vaagen says.

“The eco-friendly aspect is multifaceted, and frankly we don’t know all the benefits yet,” Vaagen says. “It’s still so much better than the steel and concrete that we’re using now, because we’re replenishing the land to absorb all that carbon, and when we cut the trees we embed it into the product, that carbon stays in that structure.”

Collins says there are also architectural benefits to creating structures with CLT.

“They’re structurally very stable, so we’re able to create great amenities like rooftop gardens and other features that we wouldn’t be able to do with conventional framing,” Collins says. “CLT gives it an aesthetic expression on the inside, so rather than a drywall box you have this beautiful wood environment that is really a step above where the market is.”

Vaagen says T3 Building that Amazon.com Inc. leases in Minneapolis is a good example of the benefits those spending time in a CLT structure may enjoy. The seven-story, 220,000-square-foot T3 Building is said to be the first such commercial building to be constructed completely of engineered wood.

“They track data everywhere, and I was talking to one of their Ph.D. industrial psychologists who does all this stuff for them, and they were talking about how they have less absenteeism there and lower turnover compared to their other spaces,” Vaagen says. “They attribute it to people liking the natural elements in the wood structure.”

Barrett says the group is eyeing some other projects. While he says it’s too early make any announcements, he says the City of Spokane has been supportive of the Blockhouse project.

“The mayor’s office has been involved, and they’ve been talking to us about how this might transform a lot of the struggling neighborhoods in Spokane,” he says. “I think that’s exciting. We all want to leave a better place, and I think that if we can create something that can be duplicated and improve the neighborhoods and be local, that’s just an awesome story.”

Others in the ownership group agree.

Whether similar groups will form to create smart wall CLT structures remains to be seen, but Vaagen says it’s impossible to pull off similar projects alone.

“We’ve all got really good core competencies, and when we add them together we get an exponential effect,” Vaagen says. “When you produce lumber, you get separated by a whole chain of distribution to get it to market. CLT allows you to be involved in that design phase.”