Some are highly occupied with months-long waitlists 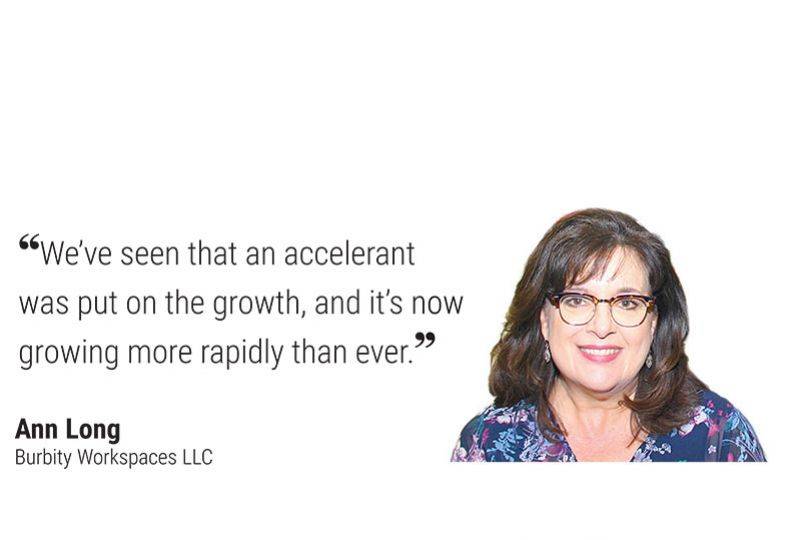 High occupancy levels at coworking facilities are expected to climb even higher with continued strong demand, in what representatives of coworking centers here describe as a permanent, post-pandemic shift in the market for office space.

Ann Long, founder of Burbity Workspaces LLC, headquartered in Liberty Lake, says, “Work life is never going to be the same as before. I think we’ll see it’s going to be a lot more flexible than ever.”

Coworking describes a group of professional workers who are self-employed or who share a workspace separately from their place of employment. Amenities generally included at coworking centers are access to Wi-Fi and other technology and the use of common spaces, such as conference or meeting rooms, and sometimes complimentary beverage stations.

Long says Burbity’s three coworking centers have all seen a big increase in demand and are about 97% occupied currently.

“Coworking was growing prior to the pandemic, but now that the pandemic is hopefully behind us, we’ve seen that an accelerant was put on the growth, and it’s now growing more rapidly than ever,” she says.

Burbity Workspaces are located at 23505 E. Appleway, in Liberty Lake; Sullivan Valley Commons, at 2818 N. Sullivan Road, in Spokane Valley; and in the Framingham Building, at 1722 E. Sprague, in East Spokane.

One reason coworking centers have reported high occupancy is the variety of services and spaces the centers can offer, Long says.

Workers who prefer a quiet and private space can find what they need, and workers who enjoy being close to others will find areas for networking and collaborating with like-minded individuals too, Long explains. Burbity’s facilities offer hot desks, dedicated desks, private offices, team suites, meeting rooms, and virtual offices.

Hot desks are spaces that allow for multiple people to use the same workstation or desk at different times as needed.

Oxford says most of Niche Coworking’s tenants are nonprofits, with a handful of freelancers and for-profit business employees also using space.

Niche’s coworking desks are in high demand, says Oxford, who oversees the program’s waitlist. She says the waitlist is an indication to her that demand isn’t expected to change.

“The pandemic really showed that people want to get out of the house … or just wanted someplace else to go. So, we’re completely full right now,” Oxford explains. “I have someone moving in this month who’s been on the waitlist for six months.”

She says Niche had about one or two openings at any given time before the pandemic began.

With a continuously evolving workforce, many coworking centers have created a flexible model that caters to changing worker needs with a variety of designated workspaces of different size options, amenities, and lease terms.

Some coworking centers cater more to tenants in dedicated offices while still offering some coworking spaces, as is the case at the Crescent Executive Suites, in the Crescent Building, located at 707 W. Main, in downtown Spokane.

Tania Baca, operations and leasing director for ESDI Inc., a Newport Beach, California-based commercial real estate company that operates the Crescent Executive Suites, says the company is about 60% occupied at its 62 executive offices. It also has 19 spaces for coworking, of which there are no permanent tenants.

Crescent’s private offices start at $400 a month, she says.

She says she welcomes the addition of more coworking space here and has collaborated with some of the companies to refer business to one another to help potential clients find the right space for their needs.

“In Spokane, we have a healthy mix of options for the whole entire community,” she says.

The coworking industry overall is strong with plenty of room to grow additional services in the future. Virtual offices and co-warehousing spaces are additional areas of growth at coworking centers that are expected to increase future business, says Long.

“We just need to listen carefully to their needs and adapt as we can,” says Long.