Spokane economy grew for some in pandemic year 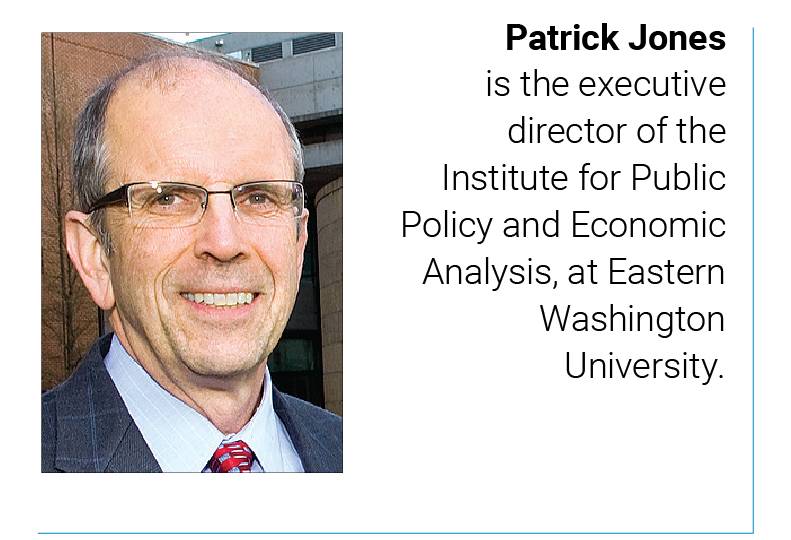 What a difference a year makes. In May 2020, U.S. employment had slipped over 25 million from its February 2020 peak. The nation was lurching toward the largest quarterly drop in gross domestic product in history with a 32% decline. Washington state’s Economic and Revenue Forecast Council was about to forecast a $4.5 billion decrease in state revenue for the subsequent 12 months, and Gov. Jay Inslee warned all state agencies to prepare to cut 15% from their upcoming July-June budgets.

Locally, county government was planning on a 6% to 10% drop in sales tax revenues, its largest source of funding. The city of Spokane was budgeting an even greater plunge, close to 20%, in its sales tax revenues. Businesses were forced to close. Pink slips and hiring freezes became the norm. Within a span of three months—February through April—the ranks of Spokane County’s employed dropped by 9%.

Most economists dismissed the prospects of a V-shaped recovery. Instead, they proposed a “square root” pattern, in which a quick bounce back would be followed by painfully slow pickup in economic activity.

And the evidence today? Nationally, real (inflation-adjusted) GDP in the third quarter shot up by 33% and by over 4% in the fourth quarter. For the year, the nation’s economy shrank, but by much less (3.5%) than forecasted. Preliminary estimates put GDP growth in the first quarter of this year at over 6%.

Washington state fared considerably better. For 2020, real personal income, a sister measure of GDP, tallied a gain of 5.4%. That increase was actually better than in 2019 and just about as good as the gain in 2018. Annual taxable retail sales didn’t fare as well, registering a 1.5% decline over 2019, but a far cry from the mid-year forecast.

Locally, Spokane County performed better yet. It will be fall before we learn about local personal income and GDP growth. But the 2020 retail sales data are now in. Countywide, sales increased by 1.6%. True, the gain wasn’t evenly distributed. The city of Spokane experienced a 2.9% drop in sales, but the decline was far less than originally feared. Spokane Valley’s economy performed well, with a gain over 2019 of 5.8%. And the city of Liberty Lake took home the prize, with a gain of 22.7%.

A look at sales in certain sectors between 2019 and 2020 helps explain some of this pattern. Those that gained the most were: building supply and garden equipment, at $116.9 million; holding companies and healthcare, at $114.7 million; electronic and appliances, at $84.6 million; and general merchandise stores, at $43.1 million. Those sectors that lost the most were: hospitality, with a decline of $341 million; apparel and accessories, down $58.2 million; followed by construction, with a $22.6 million decline. In short, some sectors won and some lost during the pandemic. A good part of the decline in the city of Spokane was its mix: it is “over-represented,” compared to the county as a whole in hospitality, apparel and accessories, and general merchandise stores.

And for 2021? We won’t have first-quarter sales data for another two months. Statewide, however, ERFC reports monthly taxable retail sales with increases over last year ranging from 6.5% in February to 48.2% in April. Spokane County’s taxable retail sales correlate closely with those of the state, so look for some big percentage gains.

For this calendar year, the state Office of Financial Management is currently forecasting a statewide jump in personal income of over 6%. Since spending follows income, it is likely that Spokane County as a whole can count on a sales tax gain over 2020 at least in the mid-single digits. The gain will likely still rest on differential pattern among sectors, but not as pronounced as last year.

What’s not to like about this picture? While sales have surged over the past few months, jobs have not. In the U.S., employment in May 2021 was down from the February 2020 peak by about 7.3 million. Statewide employment was down by about 110,000, or about 3%. In Spokane County, May employment was only slightly below the same pre-pandemic peak by about 1,000, or by 0.4%. However, at year-end, the county’s deficit to pre-pandemic levels was 18,000 jobs.

It is gratifying to note that the May estimates represent a dramatic turnaround in the county from year-end 2020. The recovery in the labor market, however, has also been very uneven. While three of the top five employing sectors regained pre-pandemic levels by year end, the other two did not. The hospitality sector employed 4,000 fewer than in the first quarter, and retailing at year-end was still down 2,000 jobs from the first quarter.

The county workforce has come back to its earlier levels, if not in a V-shape, far faster than most expected. Yet, a bounce of the hospitality and retail sectors to pre-pandemic trend lines this year seems unlikely. In the big picture, measured by total revenues or number employed, the Spokane economy has moved beyond the pandemic. But some parts are still stuck.