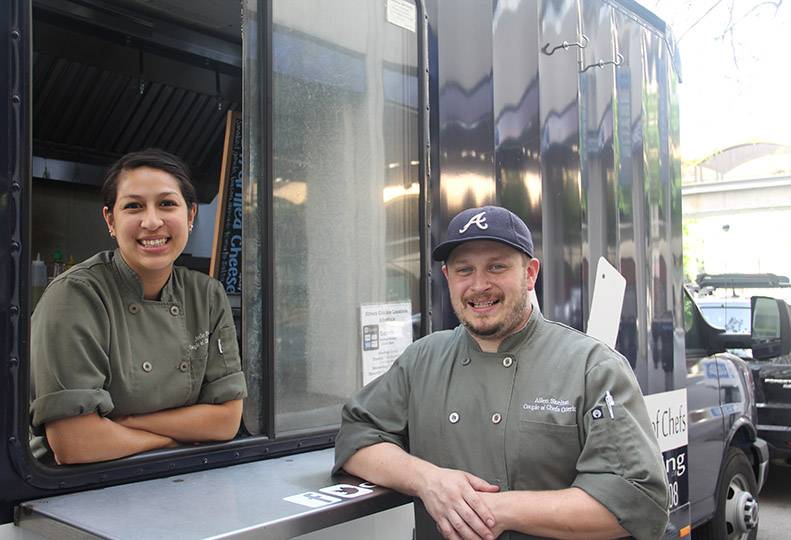 -—Staff photo by Jessica Valencia
Couple of Chefs Catering owners Joile Forral and Allen Skelton currently operate a food truck that parks downtown. They spent $80,000 on the mobile part of the business.

With mobile food vendors gaining popularity here, the city of Spokane is considering changes to its municipal code that would affect food-truck and food-cart operators as early as this summer.

A potential increase in the number of mobile food vendors raises questions about whether they would draw customers and revenue away from established restaurants that have higher operating costs.

Steve Hill, owner of Hills' Restaurant & Lounge downtown at 401 W. Main, says although more food trucks might impact his business slightly, the two types of eateries attract different customers. He says he's noticed that mobile food vendors have increased in recent years, particularly during large events, such as Spokane Hoopfest, but doesn't regard it as a big concern.

"I imagine the food trucks will affect business a little bit, but people will still want to sit down and have a meal," Hill says.

Worlock says, "In general (brick-and-mortar restaurant owners) want them to follow all the same rules as everyone else, which they do in terms of food safety and all of that, but the city shouldn't be making special concessions to allow them to operate." That's especially true downtown, where competition with other restaurants is more likely than in other areas in the city, he says.

Worlock says 89 vendors operated throughout Spokane County last year, which was up from 72 vendors in 2011, according to Spokane Regional Health District data.

Currently, mobile food trucks and carts operate in the city under an itinerant vendor permit, which applies to temporary or permanent registered businesses that sell food or wares typically from a temporary location.

"That code was adopted really to address the door-to-door salesmen or door-to-door vendors that aren't location specific," such as an ice cream truck that drives through neighborhoods or Schwan's food and grocery delivery, Worlock says.

He says the code in its current state doesn't address mobile food vendors that operate from a single location.

"It doesn't really work well for the mobile food vendors that want to find a spot, like on a street corner and vend there," Worlock says. "And the reason it doesn't work well is because the regulation says you're to refrain from staying in one spot for 10 minutes."

With the new permit, vendors who are stationary while operating would be broken down into four categories: those who vend from a street or sidewalk, those who operate in a city park, those who set up on private property, and those who don't vend from a specific location.

"We want to make it clear where you can vend, and under what circumstances," Worlock says.

He says the city would like to have the proposed regulations go to the city council in June for approval.

"We'd like to have these in place this summer, so they can be used by the vendors," Worlock says.

Although final details about city fees, licenses, and permits haven't been determined, Worlock says the current $110 full-year business registration will remain the same. That fee includes the business license and registration fee. He says the city hasn't yet determined if it will charge an additional fee for a mobile food vendor permit or license.

He adds that city business registrations issued to mobile food vendors prior to development and enactment of the new regulations will be valid, and vendors should continue to operate under the terms of their license until time for renewal.

Worlock says other goals of the proposed changes include adding a site plan review to the vendor permitting process.

The city created an interdepartmental team of eight people to evaluate the existing regulations governing mobile food vendors. The team also looked at how other cities, such as Seattle, Tacoma, and Portland, regulate their burgeoning mobile food vendor populations. From that, the team decided how best to address the regulatory need here.

The site-plan review, a proposed addition to the permitting process for Spokane, will evaluate things such as public right-of-way access, if vending on a sidewalk, and disposal of waste water, among other things, Worlock says.

Both Seattle and Portland require a site-plan review, which can cover vehicle design, food storage, power source, where food will be purchased, and where the unit will be cleaned. Worlock says the site-plan review the city of Spokane is looking at won't be as detailed as those found in either city.

Portland is no stranger to the mobile eateries that have grown more popular over the years. Pockets of food carts are spread throughout the city, which estimates more than 400 food carts and food trucks operated there last year. A mobile food unit, considered a vehicle for all intents and purposes, is charged an annual license fee between $370 and $425. That's in addition to a plan review submitted to Multnomah County Environmental Health that costs $405, or $1,215 to rush the process, which typically takes about 10 days, according to the Multnomah County website.

Among the people who will be affected by the new regulations is Joile Forral who co-owns Couple of Chefs Catering with business partner Allen Skelton. The pair has operated the business since 2011 and recently opened a food truck.

"As far as the city doing what they're doing, we think it's great," Forral says. "The only concern we have is the city didn't think of food trucks downtown, and we think that's a big issue."

The pair, which operates their food truck downtown several days during the week, says there's been miscommunication about whether they need to pay for parking at metered spots while downtown, or whether they can use a meter bag that is leased from the city's street department. The meter bag enables the lessor to use the space without plugging the meter.

To operate here, a mobile food vendor currently must seek permits and approval not only from the city but also from agencies such as the Spokane Regional Health District, Washington state Department of Labor & Industries, and the fire department.

"There are all these different agencies you have to go through, and they're not always on the same page," Forral says.

Forral says it took them four or five months to obtain all the necessary licenses and permits on the state and local levels, and the total cost to become operational was about $80,000. That amount includes the purchase of the truck, retrofitting the vehicle, purchase and installation of cooking equipment, and obtaining licensing, among other expenses.

Hill says although he wouldn't want a mobile food vendor to open up across the street, a sit-down restaurant and a food truck would likely appeal to different types of diners. As for food safety regulations, he says as long as the vendors are held to the same standards, there shouldn't be an issue.

"I'm sure if the health department is as strict as they are with us, it'll keep the shady people out of it," Hill says.